Major League Baseball and its players have yet to agree on a plan to begin the season after it was paused back in March, but the 2020 MLB Draft will proceed – even though that will look different, too, in response to the coronavirus pandemic.

The league announced in March that the 40-round draft would be reduced to just five rounds, as owners tried to cut costs amid the pandemic. Signing bonuses will be delayed, with the full amount not due until July 1, 2022. Teams will be allowed to sign unlimited undrafted players for $20,000, according to ESPN.

Here’s everything you need to know about the MLB Draft:

For the first time, more than one network will have coverage of the MLB Draft. MLB Network and ESPN will air all rounds live.

When do the Red Sox pick?

Draft order is based on the previous season’s standings. After an 84-78 season, the Red Sox will start with the 17th pick.

“We can sit here and feel sorry for ourselves for not having a second-round pick and feel like we got the short end of the stick on MLB’s ruling, but at the end of the day, the Red Sox fan base, the industry, all of our peers, they’re going to remember who we ended up drafting in Rounds 1, 3, 4, and 5,” Toboni said.

“Is there going to be a giant missed opportunity of who we could have signed in the second round? Of course. But I think if we operate that way, feeling sorry for ourselves, thinking about what could have been, we’re not getting anywhere.”

The Houston Astros forfeited their first-round pick as part of their penalties for sign-stealing.

Arizona State junior Spencer Torkelson, a first baseman, is projected to go first, and Vanderbilt outfielder/third baseman Austin Martin, also a junior, is right behind him.

Two junior pitchers, Texas A&M’s Asa Lacy and Georgia’s Emerson Hancock are slotted at No. 3 and No. 4 on MLB’s list of top prospects, a difference from last year’s draft, when a pitcher wasn’t selected until Nick Lodolo (TCU) went to Cincinnati with the seventh pick.

What are the Red Sox looking for?

The Red Sox will only draft four players, but Toboni said the approach “doesn’t change” in this unique period.

“I hate it when people refer to players as assets,” Toboni said, per MLB.com’s Ian Browne. “But I was thinking to myself, it’s almost like a stock. If you think about investing in a blue chip stock, Caterpillar for instance, versus a crazy, early-stage start-up, and the different risks that come with those investments, you come to an expected value on both so your approach doesn’t really change as long as you’re comfortable how you arrived at that value.”

Boston’s farm system is ranked No. 25 of 30 by MLB Pipeline, so the next two days are a good opportunity for the team to build below. The Red Sox need support on the mound, with Noah Song fulfilling his commitment to the Navy and Jay Groome recovering from Tommy John surgery, and after drafting position players first in 2018 and 2019, may grab some early this year.

In several mock drafts, the Red Sox have been linked to high school righthander Mick Abel, who is ranked the No. 11 prospect by MLB Pipeline.

Mick Abel (2020 RHP, Tigard, OR) was electric at #PGNational. His FB topped out at 97 mph while not dipping below 92 with BB that already showed plus at 86. Abel, an Oregon State commit, has outstanding projectability on the mound frame an ideal build and an ultra-clean delivery. pic.twitter.com/vPnNgXkViH

The 2019 and 2020 Gatorade Baseball Player of the Year for Oregon, Abel led Jesuit High School to a state championship last season with a 1.26 ERA and 111 strikeouts over 72.1 innings.

Are there any local players to keep an eye on?

Only 160 players will be selected in this year’s draft, compared to 1,217 that heard their names called last summer. With the loss of high school and college seasons that could’ve impressed this spring coupled with the shortened draft, a number of Massachusetts prospects will be left hanging in the balance.

Virginia Tech lefty Ian Seymour, a junior from Westborough who attended St. John’s Shrewsbury, is one of best bets for Bay State representation this week.

LHP Ian Seymour’s draft stock is rising as fast as his fastball velo. @ProspectJesus and @B_Sakowski_PG break down why he’s suddenly become a commodity in the upcoming MLB Draft. https://t.co/FJhi62jIjT pic.twitter.com/9TlSjzt9Ik

“No one has ever been in this situation before,” Seymour told The Boston Globe. “We’re kind of learning and getting through it together. So really, I’m not in control of any of it. I really don’t think about it too much. Obviously, it’s the dream to get picked but I’m just trying to get better every day.”

Harvard-bound shortstop Jake Berger, who would have captained Buckingham Browne & Nichols this spring, also popped up on MLB.com’s list of the top prospects from each state. 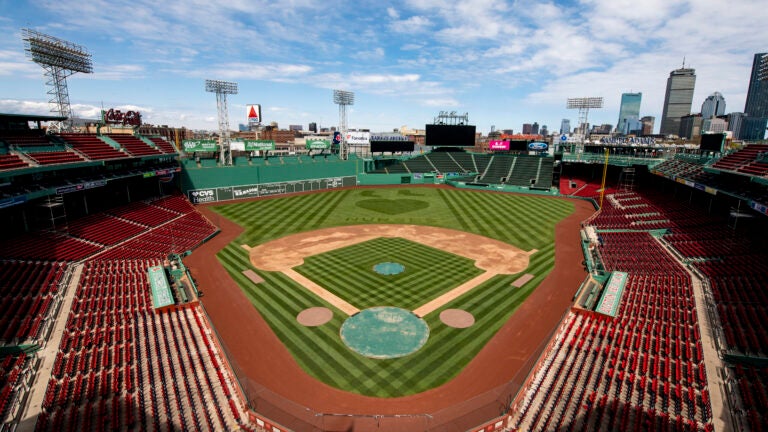 MLB offers 76-game season, up to 75 percent of salaries