LOS ANGELES (AP) — Three years after a sign-stealing scheme propelled the Astros to their first championship, Houston’s star-studded lineup did little during the regular season to quiet criticism it could only hit when cheating.

Back in the postseason, they’re banging away as well as ever — no trash cans necessary.

“We didn’t show this too much during the season, but this lineup can do this every night,” left fielder Kyle Tucker said.

Correa drove in five as the Astros — October villains to many a year after their espionage was exposed — advanced to the AL Championship Series for the fourth consecutive season. They improved to 5-1 in the playoffs after struggling to a 29-31 record in the pandemic-shortened season.

“This is a special team that has been here before,” Brantley said. “We have young guys that are leaning on the veterans and the veterans are taking care of them right now. No one guy has to carry this team when you have so many special players in the locker room like we do.”

It will be the Astros’ first ALCS under Dusty Baker, their 71-year-old manager. Baker earned his first closeout win since the 2003 NL Division Series and improved to 4-13 in closeouts.

“It’s been a long, tough road, but we’re halfway there,” Baker said. “I’m thankful and happy, but I still got some happiness left to give.”

Houston will play either the New York Yankees or Tampa Bay Rays in the best-of-seven ALCS in San Diego. The Rays lead their ALDS 2-1.

The Astros and A’s combined for 24 homers — 12 each — the most in a postseason series of five games or fewer.

Houston clinched at Dodger Stadium, where it won the 2017 World Series in seven games. The Astros’ sign-stealing scheme — involving live video feeds and banging on dugout trash bins — used during their title run was revealed last year by former teammate and current A’s pitcher Mike Fiers, who didn’t pitch in this series.

The scandal led to season-long suspensions of Houston general manager Jeff Luhnow and manager AJ Hinch, who both were fired. Boston manager Alex Cora and Mets manager Carlos Beltrán also lost their jobs as fallout their roles with the ’17 Astros, and Houston still draws ire of other players and fans.

“They closed the circle and got into each other,” Baker said of his team. “It made them closer.”

Correa said outside opinions don’t matter to the team.

“We’re motivated because we want to win and we want to bring another championship to the city of Houston,” he said. “We know what it feels like and we want to have that feeling again.”

During the shortened regular season, the Astros ranked 20th in the majors with a .240 average and 14th with 279 runs.

The slump continued through the wild-card round before Houston turned Dodger Stadium into a launching pad against Oakland. The team batted .322 in the ALDS, with Correa, Jose Altuve, Alex Bregman and Tucker each batting over .400, and George Springer at .389.

“We never gave up because we had a down year offensively,” Correa said. “We kept going to the cage. That helped us in this series.”

Much of that damage came against Oakland’s vaunted bullpen. A’s relievers combined for a 6.27 ERA in the series, including six earned runs Thursday.

Facing elimination for the fourth time this postseason, Oakland’s Ramón Laureano hit a pair of homers, including a three-run shot in the second that gave the West champion A’s the early lead for the fourth straight game.

Houston starter Zack Greinke held up two fingers facing Laureano and catcher Martín Maldonado before Laureano homered 440 feet to left for a 3-0 lead. It might have appeared that Greinke was signaling his pitch, although he has at times used a hand signal to switch sign sets mid-inning.

“I just switched the pitch so I don’t waste time shaking off,” Greinke said. “Just a way to save some time.”

It was the first postseason homer Greinke allowed since last year’s Game 7 of the World Series against Washington, when Anthony Rendon’s solo shot began the Nationals’ comeback.

Laureano’s leadoff homer in the fifth cut Oakland’s deficit to 5-4, but the A’s would get no closer.

“It just hurts. It hurts a lot,” outfielder Mark Canha said. “It felt like this was our year.”

Frankie Montas couldn’t withstand Houston’s onslaught in the fourth, when the Astros sent 10 batters to the plate and scored five. Altuve led off with a walk and scored on Brantley’s homer to pull the Astros to 3-2. Bregman and Tucker had back-to-back singles and scored on Correa’s shot to left that he stood and admired, giving Houston the lead for good, 5-3.

Brantley added a solo shot in the fifth and Altuve had a two-run blast in the seventh that extended the Astros’ lead to 11-4.

Houston’s Cristian Javier got the victory in relief. He retired five in a row before giving up back-to-back, two-out singles to Robbie Grossman and Sean Murphy in the seventh. Marcus Semien — a free agent-to-be playing perhaps his final game with Oakland — flied out to left and Tucker backed up to the wall to make the catch for the third out.

No A’s starter pitched beyond the fifth in the series. Loser Montas gave up five runs and seven hits in 3 2/3 innings. He struck out three and walked one.

“We just couldn’t do enough on the pitching end to hold them down,” A’s manager Bob Melvin said. “And then you start to press a little bit even though our guys had a good attitude every inning even going into the ninth inning and get some guys on. We battled until the end as you would expect, just not enough.”

Greinke, who had experienced arm soreness that kept him from starting Game 3, allowed four runs and five hits in 4 2/3 innings. He struck out four and walked one.

Athletics: Melvin said he developed a foot issue during batting practice and didn’t make the pitching changes because “I didn’t want to limp out there and limp back and take a bunch of time.”

With Oakland trailing 3-0, Josh Reddick robbed Matt Olson with a spectacular catch in right. Reddick reached over the low wall to snag the ball and fell on his backside, holding up his glove. The Astros bullpen had a front-row seat to the catch and cheered; Greinke let out a visible sigh of relief on the mound.

BACK TO THE ALCS

The Astros became the third team in AL history since 1969 to reach four straight AL Championship Series. The Yankees did so from 1998-2001 and the A’s went to the ALCS five times from 1971-75.

The A’s played their 10th straight day game dating to a doubleheader on Sept. 26. The last time they played over nine consecutive day games was April 23-May 8, 1949, when they had 16 in a row, according to Elias Sports Bureau.

All four games in the neutral-site series were played during the day. After the first three games in the 90s and 80s, the temperature cooled to 75 degrees for Game 4.

Athletics: Host the Milwaukee Brewers in their spring training opener on Feb. 27.

Astros: Travel to San Diego for the AL Championship Series. 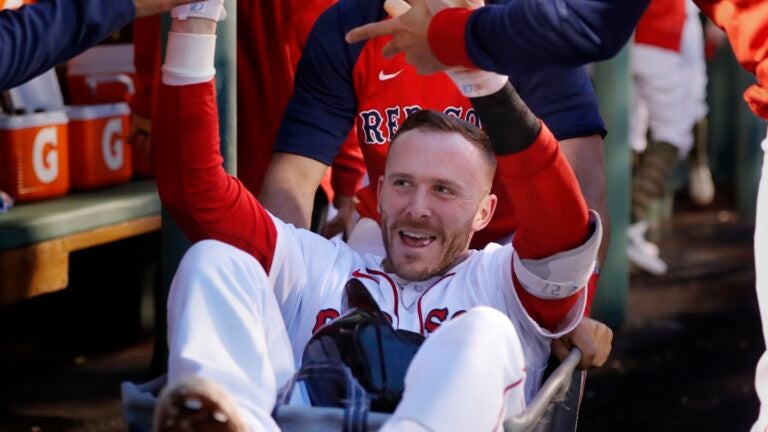