Two years after helping the Red Sox beat the Los Angeles Dodgers in the 2018 World Series, Mookie Betts is back on baseball’s biggest stage – only this time as a member of the Dodgers.

The superstar rightfielder’s defense was instrumental during the National League Championship Series, as the Dodgers rallied from down 3-1 in the series to stun the Atlanta Braves and cement their third trip to the World Series in the last four seasons.

The Athletic’s Pedro Moura took a closer look at what makes Betts unique and why he’s achieved tremendous success to start his career. Relying on a “Michael Jordan-esque” commitment to his craft and playing a “sincere game,” Betts has found a way to consistently separate himself from the pack.

Here are four things we learned from Moura’s profile of the 2018 American League MVP.

Betts felt compelled to speak up just one week into his time with the Dodgers.

Moura chronicles how Betts walked into the middle of the organization’s Camelback Ranch clubhouse and told the team the way it started spring training wasn’t good enough.

He advised every player to treat every day like it was Game 7 of the World Series so they would be prepared for that moment if it arrived. Pitchers David Price and Joe Kelly, who also played with Betts in Boston, were stunned. While Betts has always approached the game with diligence, he wasn’t necessarily known for his vocal leadership with the Red Sox. They felt a shift in the way he expressed himself.

“It was like, ‘We’re the most talented players. Let’s go,'” Kelly said on WEEI.

Ever since, he’s embraced that role to an even greater degree. He’s not the most talkative person, and he doesn’t like to alienate anyone, but he speaks up when he feels it’s necessary.

“It’s not like he went, ‘Oh, I’m gonna be the leader here,’” said Tim Hyers, who coached Betts in the minors and with the Red Sox. “I think Mookie goes, ‘I’ve seen this happen: This is gonna help us win.’ Whenever he sees the need to speak up, he’s not scared to do it. He sees the value in that. So it doesn’t shock me that he has a more vocal presence with the Dodgers, based on those circumstances.”

Moura detailed how Betts “has always held himself and his teammates to unreasonably high standards.”

He used to keep those expectations of others to himself, and he grew to trust that his teammates would rise to the challenge. In the meantime, he’d do everything in his power to make sure he was ready for any situation that came his way. Over the years, that vocal accountability has intensified.

“I’ve never seen anybody as committed,” Red Sox first-base coach Tom Goodwin said. “He’s Michael Jordan-esque when it comes to the commitment. At first it was just him, but now that he’s with the Dodgers, he seems to be calling on his teammates to improve. That’s like Michael Jordan in ‘The Last Dance’ level.”

Give us all the angles of that @mookiebetts catch. 😱 pic.twitter.com/vp4lrL1VcE

Much like Jordan, too, Betts has picked up golfing and loves trying to master the nuances of the sport. In a similar manner to the way he views baseball, but to a lesser degree, he’s obsessed with the details.

Former Baltimore Orioles manager Buck Showalter, who checked out Betts in the Arizona Fall League in 2013, was immediately drawn to Betts’s meticulousness. Instead of half-listening and nodding, Betts truly processed what Showalter was saying and wanted to learn.

Moura reports that Betts was interested in the fact that most warning tracks are minutely different and wanted to understand every stadium’s quirks.

“His substance was his style,” said Showalter, who highlighted his “sincere” game. “You were drawn to the way he separated himself. He was just engaged in every part of the game. He was very cognizant of what was going on around him, situations. (When) the ball was hit to him, you never saw him have that panic movement. I was drawn to him all fall.”

He holds himself to a ridiculously high standard.

Betts was originally an infielder. With Dustin Pedroia at second base, the Red Sox needed a way to get Betts on the field, so they converted him into an outfielder.

Moura notes that in one of his first games, he threw out a runner at home but overshot the cutoff man, allowing a trailing runner to advance. Between innings, he apologized to first base and outfield coach Arnie Beyeler.

“How many players do you know that’s gonna do that?” asked Chili Davis, the Red Sox hitting coach at the time. “I don’t know any in the big leagues right now.”

Betts frequently asked coaches if he executed specific plays properly, and he used their constructive criticism to get better.

He conveyed his frustration to Beyeler with the effort of certain outfielders, and Beyeler advised him to talk to those players himself to garner their respect.

First, he knew he had to work on his own craft even more. He often beat himself up if things didn’t go according to plan, always seeking perfection in a sport where it’s unattainable.

“When that kid is focused, he’s tough to beat,” Davis said. “I guarantee you, the older he’s gotten, his focus has gotten so much better, which is why he’s consistently becoming a better and better player every year.”

Betts and center fielder Jackie Bradley Jr. had a friendly rivalry as outfield mates on the Red Sox over the years.

After moving from center to right field in 2015 to accommodate Bradley, Betts took it upon himself to keep pace with the guy next to him.

“Because Jackie had been a center fielder his whole life, he wasn’t out for all the extra work that Mookie was always out for,” Beyeler told Moura. “To drive him, we would always talk about that: ‘You’re gonna win a Gold Glove someday. Don’t be surprised if it’s before Jackie does.’”

Betts did just that, winning a Gold Glove before Bradley, in 2016. He’s up to four total, compared to one for Bradley, and Bradley was impressed with Betts’s highlight-reel catch in Game 7 of the NLCS.

“Hopefully, deep down somewhere, he remembers all that hard work and what he put into it,” Beyeler told Moura. “Because he’s earned all that.” 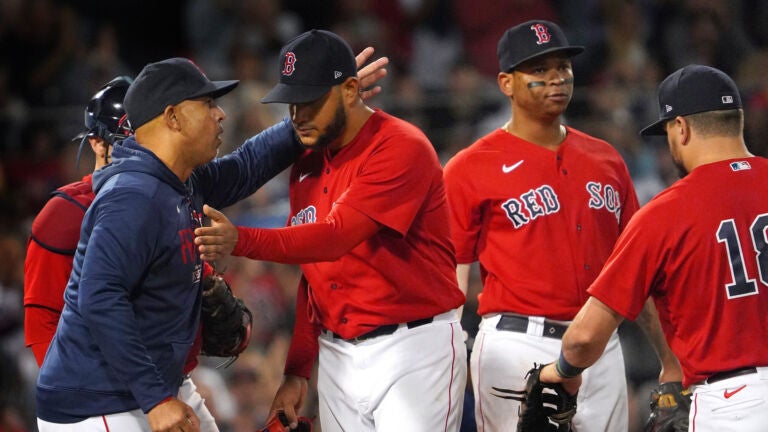