Following years of protests from fans and Native American groups, the Cleveland Indians have decided to change their team name, moving away from a moniker that has long been criticized as racist, three people familiar with the decision said Sunday.

The move follows a decision by the Washington Football Team of the NFL in July to stop using a name long considered a racial slur, and is part of a larger national conversation about race that magnified this year amid protests of systemic racism and police violence.

Cleveland could announce its plans as soon as this week, according to the three people, who spoke on condition of anonymity because they were not authorized to speak publicly on the matter.

It is not immediately clear what Cleveland’s exact steps will be beyond dropping the Indians name. The transition to a new name involves many logistical considerations, including work with uniform manufacturers and companies that produce other team equipment and stadium signage.

One of the people said Cleveland planned to keep the Indians name and uniforms for the 2021 season while working to shift as early as 2022.

Cleveland spent much of the year before the 2019 season phasing out the logos and imagery of the cartoon mascot Chief Wahoo.

One option that the team is considering, two of the people said, is moving forward without a replacement name — similar to how the Washington Football Team proceeded — then coming up with a new name in consultation with the public.

The Cleveland baseball franchise has been known as the Indians since 1915, but Native American groups and others have for decades opposed the use of Indigenous names, mascots and imagery for sports teams, insisting they are demeaning and racist. Cleveland’s name and Washington’s old name were considered among the most high-profile examples and were the targets of widespread campaigns for change.

Other professional sports teams, including the Atlanta Braves, the Kansas City Chiefs and the Chicago Blackhawks, have said in recent months that they have no plans to change their names. Many universities and high schools abandoned Native American names and mascots long ago, but efforts to address the names at all levels of sport in the United States have increased in recent months.

For Cleveland, the process began when it announced it would retire its longtime mascot, Chief Wahoo, a cartoonish caricature that was seen as particularly offensive. Many applauded the decision, but insisted the team name must go, too.

Then in July, just hours after Washington announced it would change its name (under pressure from key sponsors like FedEx, Pepsi and Nike), Cleveland said it would conduct a “thorough review” of its nickname. The team has consulted with many Native American groups, both in Ohio and nationally.

“We are committed to engaging our community and appropriate stakeholders to determine the best path forward with regard to our team name,” the team said in a statement in July.

Native American groups usually appear at Cleveland’s home opener each spring, sometimes in the face of withering verbal abuse from fans as they enter the stadium. In recent years, the team has worked with the protesters and police to help ensure the safety of demonstrators and their right to free and peaceful expression.

The club has said that the name was originally intended to honor a former player, Louis Sockalexis, who played for the Cleveland Spiders, a major league club, in the 19th century and was a member of the Penobscot Nation. Some have suggested that Cleveland adopt the name Spiders as a replacement.

Cleveland’s name was long accompanied by the Chief Wahoo logo. Phasing the image out included removing the logo from uniforms and from walls and banners in the stadium. A block “C” was adopted in its place.

“Our organization fully recognizes our team name is among the most visible ways in which we connect with the community,” the team’s July statement said. 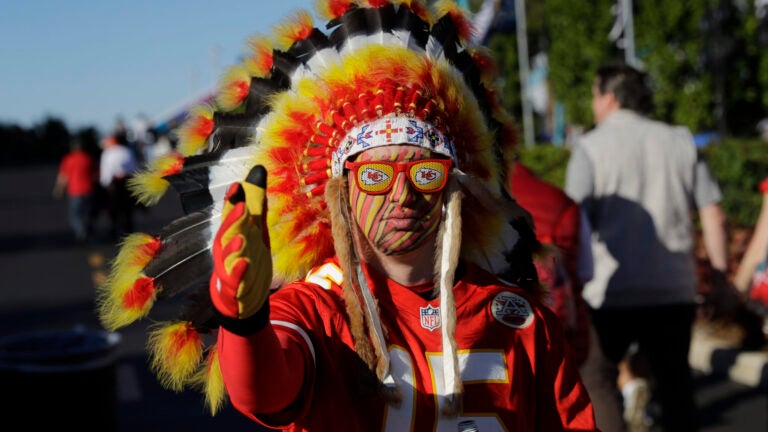