NEW YORK (AP) — The Blue Jays gave the Yankees a Bronx battering this week they haven’t experienced since they were still the Highlanders.

The message there, according to manager Charlie Montoyo, is that after nearly two years away from their home park in Toronto, going on the road won’t faze the Blue Jays.

“It’s not easy to come and be relaxed at Yankee Stadium,” he said. “And they did for four games.”

Bo Bichette thumped a leadoff homer in the first inning and singled in the tiebreaking run in the seventh, Vladimir Guerrero Jr. hit his 42nd homer, and Toronto held off skidding New York 6-4 Thursday night for its eighth straight win.

The Blue Jays completed their first four-game sweep in the Bronx since 2003 and pulled within a half-game of New York for the final AL wild card. This run also included three wins at home against Oakland — another team in the playoff hunt — and gave Toronto its longest winning streak since an 11-game spurt in 2015.

It’s the first time a team never trailed while sweeping the Yankees over four games in New York since 1908, when the club was known as the Highlanders, according to STATS.

“It’s special,” Bichette said. “We feel like everybody can contribute in a lot of different ways.”

The Yankees have lost six straight and 10 of 12, a jarring collapse immediately following a 13-game winning streak that propelled them to the top of the wild-card race. They fell a game behind idle Boston for the lead spot.

“We just had a horrible homestand,” Yankees manager Aaron Boone said. “It’s not OK. … But we’ve been through this throughout the season. We’re up against it again. We look forward to going out and turning this around tomorrow. We know it can turn just as quick as it’s gone sideways here.”

José Berríos (11-7) dominated the Yankees until Anthony Rizzo’s two-run homer in the sixth tied it at 2. The right-hander got two outs in the seventh before being pulled after 109 pitches, allowing two runs with eight strikeouts.

Bichette got the first of his three hits with his 22nd homer to begin the game. Randal Grichuk added a solo shot against New York starter Nestor Cortes Jr., and Teoscar Hernández also had three hits for Toronto.

Guerrero’s solo shot off Andrew Heaney in the ninth made it 5-2. The 22-year-old Guerrero matched Kansas City’s Salvador Perez for second in the majors behind Angels two-way star Shohei Ohtani, who has 43 homers.

The Blue Jays played the entire 60-game 2020 regular season and the first half of this year splitting home games between their spring training complex in Dunedin, Florida, and their Triple-A park in Buffalo, New York, due to Canada’s coronavirus protocols. They finally returned to Rogers Centre in late July, but all of that discomfort served to harden the Jays to the rigors of play on the road, according to Montoyo.

“They never complain, and that’s why we’re in this spot right now,” he said. “It’s been impressive what our team has done. I’m so proud of our team, it’s a happy night for us.”

Gary Sánchez and Luke Voit homered for New York with two outs in the ninth off Nate Pearson. Sánchez’s homer was his 21st and Voit’s was his ninth.

Bichette and the Blue Jays took the lead in the seventh against Sal Romano (0-2), who was recalled from Triple-A Scranton/Wilkes-Barre before the game. Danny Jansen doubled, pinch-hitter Jake Lamb was hit by a pitch and Bichette followed with a soft, two-out single.

Romano walked Marcus Semien to load the bases and was replaced by Wandy Peralta, who struck out Guerrero to end the inning.

Yankees second baseman Tyler Wade dropped the feed on a potential double play ball in the eighth, helping Toronto load the bases again with one out. Peralta allowed his third walk of the inning to Jansen to put the Blue Jays up 4-2.

New York hit into two double plays, including one by Giancarlo Stanton with two on and one out in the eighth. The Yankees have grounded into 130 double plays this season, tied with Washington for most in the majors.

Bichette was 6 for 33 (.182) out of the leadoff spot this year prior to Thursday. He fouled off four two-strike pitches before taking Cortes deep to left field in the first.

Grichuk also fouled off four two-strike pitches before driving one into the left-field seats leading off the fifth.

Cortes slammed his glove and hat in the dugout after finishing the fifth. He worked through the sixth, allowing two runs on 103 pitches.

Rizzo spoiled Berríos’ shutout with his drive in the sixth, his 19th of the season and fifth since being acquired by the Yankees on July 30.

Blue Jays: Montoyo said OF George Springer (left knee contusion) could return to the lineup Friday. He fouled a ball off his knee Monday, and also was out Aug. 15-29 with a left knee sprain.

Yankees: RHP Jameson Taillon was added to the 10-day injured list with a partial tear of a tendon in his right ankle. There’s a chance he only misses one start. … LHP Zack Britton had season-ending Tommy John surgery and also had a bone chip removed Wednesday. … RHP Gerrit Cole could return early next week after leaving a start Tuesday with left hamstring tightness.

Yankees: Start a Subway Series against the Mets that will overlap with the 20th anniversary of the 9/11 attacks Saturday. LHP Jordan Montgomery (5-5, 3.47) pitches the opener Friday against Mets rookie RHP Tylor Megill (2-4, 4.20) in Queens. 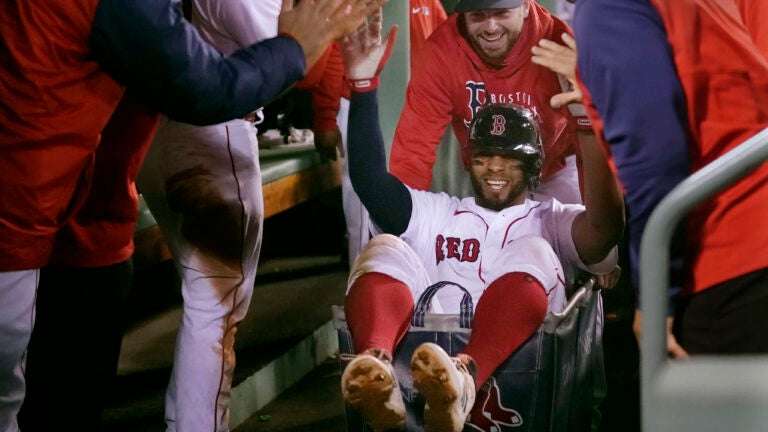