NEW YORK (AP) — For all the vitriol, Major League Baseball owners and locked-out players have closed the gap in recent weeks and are negotiating on similar frameworks for a new collective bargaining agreement.

With the lockout in its 96th day Monday, the sides remained apart to various degrees on three of the most significant items: the luxury tax, pre-arbitration bonus pool and minimum salary.

MLB told the union on Monday that Tuesday was the last possible day to reach an agreement that would allow a 162-game schedule, along with full salary and service time, a deadline first reported by The Athletic.

Openers on March 31 were among 91 games already canceled, and Commissioner Rob Manfred appeared to be on the verge of calling off more.

“This is a horrible, horrible situation. Everyone on the Yankees, everyone in Major League Baseball shares the blame, players, owners, executives for where we are. It’s a really bad look, especially (with) what’s going on in the world,” Yankees president Randy Levine said Monday on the team’s YES Network. “We all look pretty bad. … It’s embarrassing to be where we are.”

In an industry where payrolls project to total in the $4 billion range, the percentage differences on some items do not appear to be insurmountable.

The sides appear to be about $15 million apart on the minimum salary for this year, $20 million for 2023 and $25 million for 2024, each less than 1% of payrolls. This assumes about half of players in the major leagues at any given time are impacted by the minimum.

Differences are greater in the final two seasons, when the union is asking for cost-of-living increases.

The gap in the new pre-arbitration bonus pool is $50 million this year, rising to $70 million by 2026. But, again, the percentage of overall payroll affected by this item is relatively small, under 2%.

And then there is the most divisive issue, luxury tax thresholds. The sides are $18 million apart this year, a difference rising to $33 million by 2026.

How much is each additional $1 million in threshold likely to produce in spending on players? There’s no exact formula.

In 18 seasons of the luxury tax, there have been three seasons in which one team paid tax, 10 with two, two with three and one each with four, five and six.

A maximum estimate on luxury tax impact would be a five-times multiplier, and history shows the actual impact is likely to be less.

With much of this year’s free-agent class already signed, there are few stars other than Freddie Freeman and Carlos Correa who could drive a team above the threshold.

MLB is concerned a higher 2022 figure would lead to bigger threshold numbers in later years, causing greater payroll disparity and making it more costly for mid- and small-market clubs to retain their stars.

This negotiation is more than those prominent items, and mindset is as important as current positions.

The union thinks it has moved toward clubs by retreating from proposals for more liberalized free agency and the restoration of salary arbitration for eligibility for all players with at least two years of major league service. Players also say they would agree to uniform and helmet advertisements, to a speedier process for a pitch clock and shift limits and to expand the playoffs, though the union prefers 12 teams and MLB would like 14.

Clubs believe they have addressed players’ concern that young stars have not been given appropriate salaries, and the union thinks the teams have not gone far enough. Teams also have backed off their proposals for higher penalties for teams over the tax threshold.

Both sides are close to an agreement on an amateur draft lottery aimed to incentive competition. Management has offered the top five selections and players asked for the top six, with some differences on limitations for teams participation in consecutive years.

Despite moving toward each other, the sides remain headed to a lost season unless they find a compromise.

“That’s a mind-boggling, horrid, horrid thought,” Levine said. “Shame on all of us if it ever gets to that.” 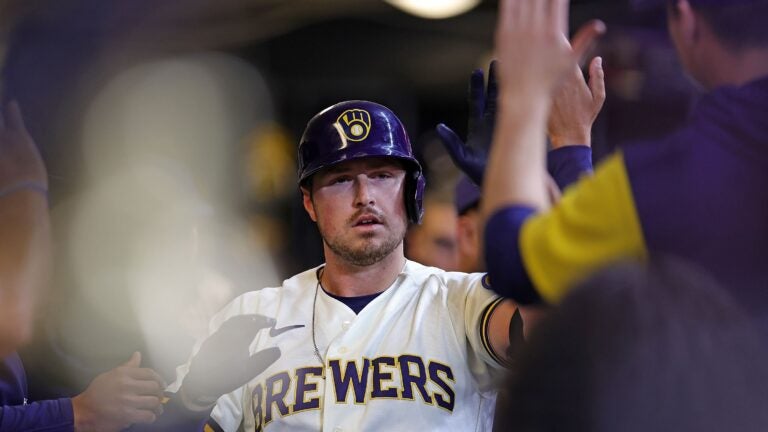 Angels get OF Hunter Renfroe from Brewers for 3 young pitchers