BALTIMORE – Officials at the Babe Ruth museum didn’t quite realize what they had until it was temporarily gone.

The first baseball card depicting Ruth, which had been displayed at the museum while on loan from a local family for the previous two decades, was sold in May 2021 to a private collector for a then-record of more than $5.2 million. The card’s new owner subsequently financed the construction of a hyper-secure case and loaned the artifact back to the museum, where it’s the centerpiece of a new exhibit that could be a boon for post-coronavirus pandemic attendance.

“Out-of-town visitors, they’re going to come here anyway, because it’s where Babe Ruth was born,” said Mike Gibbons, the historian and director emeritus of the museum, which attracted about half as many visitors last year as it did in 2019. “Our hope is that the enhanced publicity around the card, with its announced value, draws people from the Baltimore-Washington area back here to see it.”

The roughly 2.5-by-3.5-inch piece of red-tinted cardstock depicts Ruth as a 19-year-old pitcher with the 1914 Baltimore Orioles of the International League. It was part of a promotional set – the back features the Orioles’ schedule – inserted in copies of the defunct Baltimore News-Post during the Bambino’s only season with the team, and it is believed to be one of about 10 in existence.

“It’s the one card that’s even more of a holy grail than the Honus Wagner,” the card’s buyer, who spoke on the condition of anonymity to protect his privacy, said in a phone interview, referencing the fabled 1909-1911 American Tobacco Company T206 Wagner card that has long been considered one of the most valuable in the hobby. “The problem is there’s only 10 of them in the world. The bigger problem is, out of the 10, you quickly find out who owns them and realize they’re never going anywhere. It’s a lot harder to locate one that’s available for sale than it is to be able to afford it.”

Before the latest record-breaking sale, it had been seven years since a 1914 Ruth card hit the market and sold at auction for $450,300.

The Ruth card on display at the museum, which occupies four rowhouses a short walk from Camden Yards, originally belonged to Archibald Davis, who had a job as a kid selling newspapers to streetcar passengers. Davis collected 14 other Orioles cards from the set, including one of Manager Jack Dunn, who signed Ruth out of St. Mary’s Industrial School. Davis gave his collection of Baltimore News-Post cards to his son, Richard, when he was about 10.

In 1998, after reading about a blue-tinted version of the 1914 Ruth card that sold at auction for $32,000, Richard Davis brought his late father’s cards to the museum’s curator, Greg Schwalenberg. Davis loaned the collection to the museum, and when he died in 2001, his son, Glenn, renewed the loan agreement.

“We were less concerned with the value of the Ruth card, because we used the artifacts in exhibits to tell a story,” said Schwalenberg, who left the museum in 2014. “To the museum, everything’s priceless.”

Eight years later, Forbes published a story about the world’s most expensive baseball cards. In it, Brian Fleischer of Beckett Media said the 1914 Baltimore News-Post Ruth card was worth $500,000 in good condition, compared with $300,000 for a 1909 Wagner card in comparable condition, primarily because of its greater scarcity. Hobby experts estimate there are roughly 60 Wagner cards in existence.

In light of the article, Gibbons and his colleagues decided to create an exhibit showcasing the Ruth card. With the Davis family’s blessing – and an assurance that they had no immediate plans to sell their increasingly valuable collectible – the museum displayed the 1914 Ruth and Dunn cards alongside Ruth’s first marriage certificate and the official score book from his first professional game.

The exhibit went mostly unchanged until 2020, when it was removed from display after Davis contacted Gibbons to tell him he had decided to sell the card.

The eventual buyer, who primarily collects vintage cards and already owned a T206 Wagner, had a deal in place to acquire the Ruth card from Glenn Davis in early 2020. The coronavirus pandemic and a lawsuit filed by Richard Davis’s sister, Virginia Davis Mankiewicz, who claimed ownership of her father’s collection, put the transaction on hold. On Dec. 1, 2020, a Baltimore City Circuit Court judge ruled Mankiewicz had waited 22 years to file suit after learning about her brother’s claim of ownership, which fell outside Maryland’s statute of limitations. Mankiewicz appealed, but that was dismissed in April 2021, and the sale was finalized the following month.

Shawn Herne, the museum’s executive director, said his jaw dropped when he learned the Ruth card sold for more than the record of $5.2 million that Mickey Mantle and LeBron James rookie cards had fetched over the previous five months. The sports memorabilia industry’s skyrocketing growth during the pandemic has produced numerous record sales. Its steady upward trajectory for two decades before then has made it harder for the museum to acquire items for display.

“Now everyone thinks they’re sitting on something they think is going to put their grandkids through college,” Herne said, adding that in 2004 the museum received almost 400 donated artifacts. “I would say our donations have probably dropped to about 10 per year. It’s a whole different world now.”

After traveling to Baltimore to retrieve the 1914 Ruth card and have it professionally graded and encased, the buyer told Gibbons he wanted it displayed, along with the 14 other Orioles cards from Davis’s collection, at the museum indefinitely.

“Richard Davis was an incredible custodian of the card and really cared about the card being in a place where people could enjoy it,” he said. “Why would I want to take that away?”

The card now resides in a secure display designed by the same firm that created a case to house the original copy of Martin Luther King Jr.’s “I Have a Dream” speech. It’s the main attraction of an exhibit titled “The Making of a Legend,” which includes roof planks from Fenway Park, an original field box seat from Yankee Stadium and the Presidential Medal of Freedom posthumously awarded to Ruth in 2018.

The card’s owner plans to visit the museum this summer.

“No one really understood the value of this thing, and now it’s the centerpiece of the museum,” he said. “The card could be sitting in my safe, but that really doesn’t do anybody any good. The only problem is that occasionally someone comes to visit and asks if they can get a picture with the card. They have to settle for a picture with the Honus Wagner.” 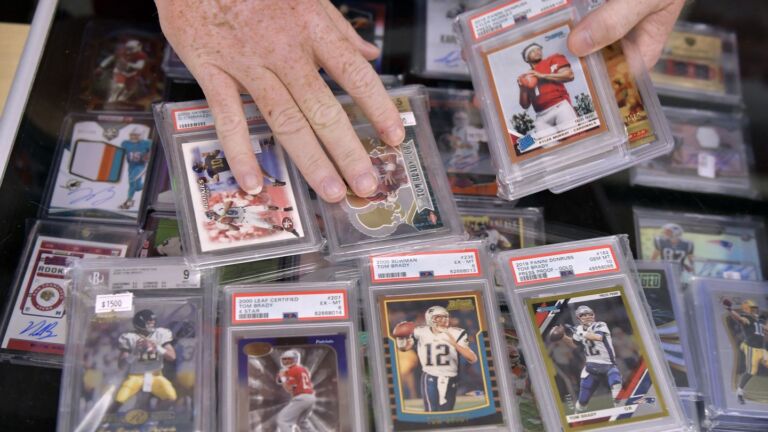