The Red Sox dropped the series finale against the Royals on Sunday, 7-3. Boston now heads into a major test this week with both the Rays and Yankees on the schedule.

Also on Sunday, Jon Rahm won his first major title with a comeback victory at the U.S. Open.

Elsewhere, U.S. Olympic trials continued over the weekend. Among several dramatic events was the last-chance success of Simone Manuel, the 2016 gold medalist who clinched a spot at the Tokyo Games in her final opportunity.

Dante Scarnecchia on the Patriots’ pre-training camp evaluation method: Though training camp doesn’t get underway for a month, Patriots fans are already clamoring for early analysis of how rookie quarterback Mac Jones looks in the team’s system.

Jones, the first quarterback ever selected by Bill Belichick in the first round during his Patriots tenure, progressed through the team’s recent mandatory minicamp. Still, for those wishing to discover if he will be New England’s long-term answer at the position or not, patience remains a virtue.

“I think that when you get the new guys in and you’re in these OTAs and the spring sessions and then ultimately minicamp, I think what you’re really seeing is just a couple of things,” Scarnecchia explained. “One is how well does the guy take coaching? How well he listens. How well he really applies what you’re trying to get taught. And that’s true for techniques and that’s true for the offensive system that you have put in this spring. Does he act appropriately if the linebacker he’s suppose to squeeze on, he squeezes on? Or not.

“That along with his mental makeup, not his physical toughness, but his mental toughness,” added Scarnecchia. “Can he take hard coaching? Can he do the things that you want him to get done?”

Scarnecchia — a Patriots assistant for 34 seasons — underlined the reality that no matter how good a player looks in minicamp drills, the team won’t really know the truth about him until the pads go on and the seasonal preparation escalates.

A few things can be measured, however, including a player’s ability to acclimate to a new playbook and system, as well as their mental toughness.

“You’ll never know how well he can do until you get the pads on and get him out there,” Scarnecchia noted, “but if you spend draft choices on guys that we have there, and I will speak from an offensive line standpoint, like [Isaiah] Wynn and David Andrews and Ted Karras and on and on and on, what you thought of them in the evaluation process will be validated as for as intelligence and as far as the mental toughness and how well they take coaching. You’re not going to know for sure until you get the pads on and you see what the guy can do.”

The Patriots will get to see the next stage of tests for Jones and other rookies in late July when training camp gets underway.

Hint: During his second season away from the Patriots in 1990, the team he worked for drafted Jeff George first overall.

The Rays are calling up baseball’s top prospect just in time for a series against the Red Sox:

On this day: In 1997, the Bruins went into the NHL Draft with the first and eighth overall picks. Boston selected Joe Thornton with the top pick, and Sergei Samsonov with its second first-round choice.

Daily highlight: Ebony Salmon of Racing Louisville carved up the Houston Dash defense before calmly finishing to give her side a 1-0 win in Sunday’s NWSL matchup. 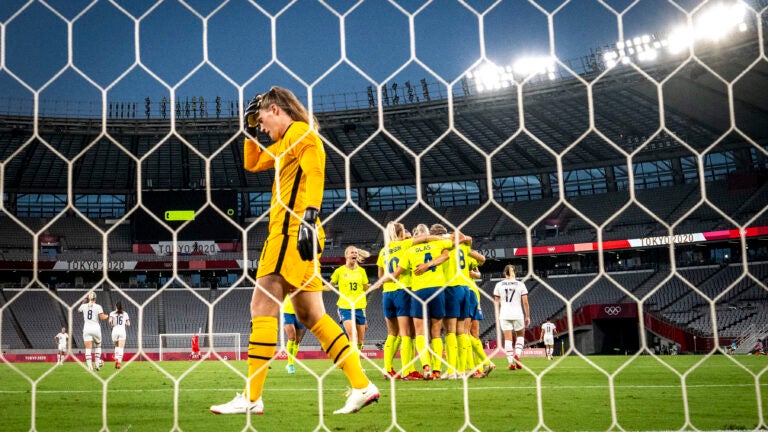 U.S. goalkeeper cites Bill Belichick in discussing how team can bounce back from loss in Olympic opener