The Red Sox begin a three-game series against the Phillies at Fenway Park this evening at 7:10 p.m. It’s the final set of games for Boston before the Major League All-Star break.

Alex Cora on the Home Run Derby: The 2021 Home Run Derby will get underway on July 12 at Coors Field in Colorado. The setting ensures that it should be an exciting contest (given the altitude), but the lineup of hitters is also impressive (highlighted by Major League home run leader Shohei Ohtani).

One thing the competition will not have is a Red Sox slugger, despite the team’s dominance through the first half of the season.

Red Sox manager Alex Cora was asked about his team’s absence from the derby during a Thursday radio interview with WEEI’s “Ordway, Merloni & Fauria.”

“I think they asked [Rafael Devers],” Cora explained. “I’m not sure because that’s between MLB and the Players Association. And he declined.

“He feels like he’s not a home run hitter in [batting practice],” said Cora, who couldn’t hold back a laugh. “Great answer by him, I guess.”

The 24-year-old Red Sox third baseman is currently one of the better sluggers in the league with 21 home runs and a .921 OPS. His 71 RBIs are second most in baseball.

Cora, though excited for a derby at Coors Field, said he understands why.

“I wanted Raffy to do it,” said Cora. “I think he was going to be OK. I understand why not and I respect that decision.”

An incredible grand slam, with the call from Don Orsillo: Padres relief pitcher Daniel Camarena was called up to the Major League level for a second stint with San Diego on Thursday. Later that day, he was called into the game to pitch, but also made a plate appearance against Nationals ace Max Scherzer with the bases loaded.

The improbable ensued, with Don Orsillo on the call:

San Diego went on to tie a team record for a single game comeback, rallying from an 8-0 deficit to win on a walk-off, 9-8.

The ball movement from the Suns: Phoenix went up 2-0 in the NBA Finals in part because of some exquisite passing. In one sequence, the Suns made 10 passes before getting it to De’Andre Ayton for a basket and a foul.

On this day: In 1946, the American League flattened the National League in the All-Star Game at Fenway Park, 12-0. The Red Sox were well represented in the home game, with eight players on the A.L. roster.

The most interesting moment came when N.L. pitcher Rip Sewell tried to use his “blooper pitcher” (later known as an “Eephus pitch“), lobbing the ball instead of throwing a regular pitch.

Williams, in the midst of an MVP season, watched the first unorthodox pitch go by. But when Sewell threw it again, the Boston slugger was ready, smashing it out for a home run to the delight of the Fenway crowd. 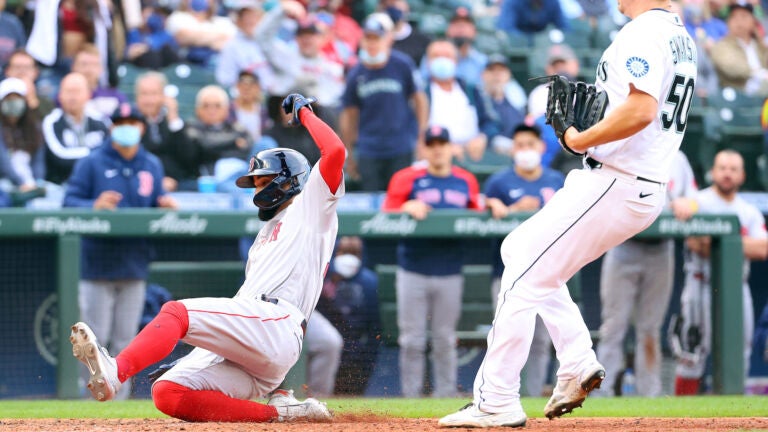