The Red Sox dropped both games of a doubleheader to the Yankees on Tuesday. Boston has now fallen behind New York in the American League wildcard race tiebreaker.

The Patriots continue preparations at training camp ahead of tomorrow’s preseason game (New England’s second of the season) against the Eagles at 7:30 p.m.

How the Patriots view Mac Jones: On Tuesday, Patriots coach Bill Belichick — when asked about Mac Jones not getting as many first-team reps in practice — downplayed the idea that just because a player was appearing more with the second-string didn’t necessarily mean he couldn’t become the starter.

“Spending a lot of time worrying about who else is doing something else and who else is out there and not out there or whatever is honestly a total waste of time and energy,” Belichick told reporters. “It’s not productive, so we don’t need to worry about it.”

On Wednesday, ESPN NFL analysts discussed the soundbite, and what it might mean for New England’s current quarterback competition between Cam Newton and Jones.

Alongside Acho on ESPN’s morning show “Get Up!” was NFL insider Jeff Darlington, who offered comments from a source he said was with the Patriots.

“I just got a text from somebody within the Patriots organization who pointed out that Mac Jones is handling things ‘very well, very smart, very hard worker, steady progress,'” said Darlington. “These are all the things behind the scenes that you want to feel about Mac Jones.”

“Yes it matters what we personally see in practice and preseason games,” Darlington explained, “but what’s happening behind the scenes in that building, the fact that he’s making that type of progress, to me, tells you that yes as Sam pointed out, this is a competition.”

The Patriots continue the preseason on Thursday in the team’s second game in a matchup with the Eagles. In the first preseason game against Washington, both Newton and Jones were up and down. Jones displayed an ability to make throws in tighter coverage, offering some early answers to pre-draft questions.

According to Darlington, Jones is making it a legitimate quarterback competition with his performance so far.

“To me, Mac Jones has done enough already to insert him into that conversation,” Darlington added. “How far he takes it now is the question before Week 1.”

Trivia: In 2000, the same year that the Patriots drafted Tom Brady in the sixth round, New England took a running back in the third round. Name that running back.

Hint: He made a clutch play on the final drive of Super Bowl XXXVI, extending his reach out of bounds to stop the clock after catching a short pass from Brady.

Bill Belichick with his Sports Emmy:

On this day: In 2016, Usain Bolt won the men’s 200-meter gold medal for the third consecutive Olympics, defeating the field at the Rio Games in dominant fashion. 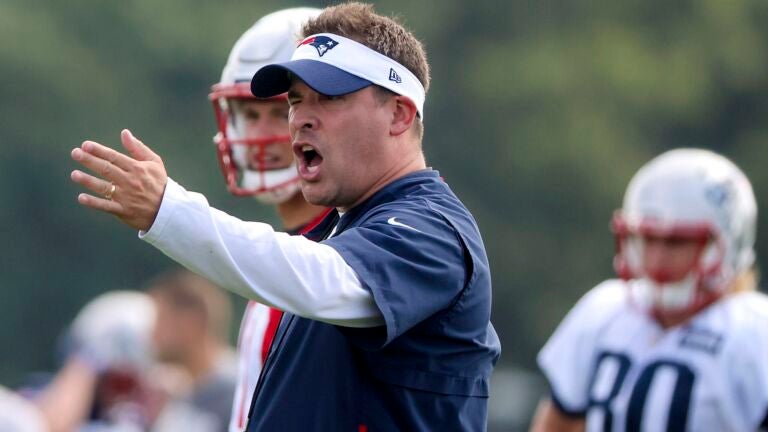