The Celtics brushed aside the Nets 126-91 on Tuesday. Boston opened the game with a ridiculous 28-2 run.

The Bruins lost to the Penguins, 4-2. Brad Marchand could face a suspension after punching Pittsburgh goalie Tristan Jarry.

At the Olympics, 36-year-old Connecticut native Lindsay Jacobellis won gold in women’s snowboard cross. It was the first gold medal for Team USA at the Beijing Winter Games.

For Jacobellis, in her fifth Olympics, it represents a crowning career achievement:

Rob Gronkowski on Joe Burrow: During an interview for a promotional event on Tuesday, former Patriots tight end Rob Gronkowski was asked about a potentially important decision in his football career.

After saying for years that Tom Brady was the only quarterback he’d play for in the NFL, the 32-year-old tight end now has to confront a new reality. With Brady retired, Gronkowski will have to find a new quarterback if he wants to keep playing.

So which quarterback would Gronkowski want to catch passes from?

“I kind of like this young buck quarterback. He’s in the Super Bowl now: It’s Joe Burrow, man,” said Gronkowski. “I watched him in college. I just love the way he presents himself out on the football field. In the pocket he’s just so calm and he just slings it out on the field.

Gronkowski is also a fan of Burrow’s style.

“I just love his swag, too,” he added. “If I had to pick a quarterback it’d be the young buck Joe Burrow. He’s killing it right now in the game.”

In March, Gronkowski will become an unrestricted free agent, and will likely draw interest from multiple teams. He’s coming off of a season in which he totaled 55 catches for 802 yards and six touchdowns.

David Pastrnak scored by batting a midair rebound into the net:

On this day: In 2020, the Red Sox completed a revised deal that sent Mookie Betts to the Dodgers.

Daily highlight: Bruno Fernando with a powerful dunk to cap off the Celtics’ dominant win on Tuesday. 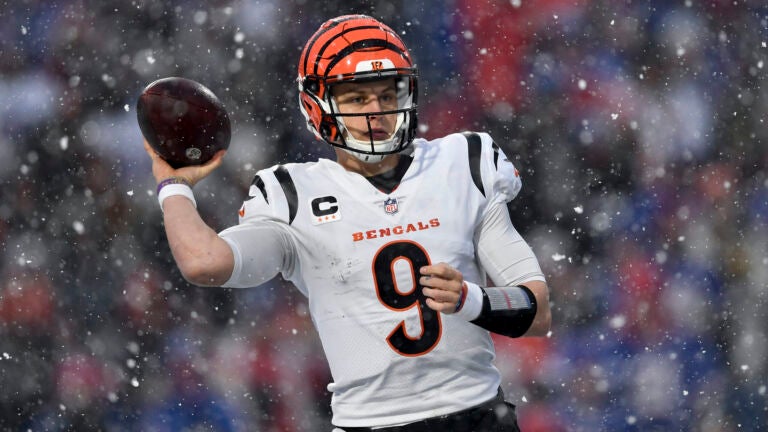