The Celtics defeated the Grizzlies 120-107 on Thursday. Jayson Tatum scored 37 points on his 24th birthday to lead Boston to the win.

The Bruins also won, scoring three third period goals to emerge with a 5-2 victory over the Golden Knights.

Also on Saturday, the Pride will be in New Jersey to play the Riveters at 2 p.m. And the Bruins will play the Blue Jackets in Columbus at 7 p.m.

“A story I can tell you is Jarrett Stidham,” Strong told reporters. “He thought the one team that for sure wasn’t going to draft him was the Patriots. He was like, ‘My meetings with them went terrible.’ He had a walkthrough with them, and it was a terrible walkthrough.”

Despite Stidham’s impression, New England nonetheless picked him in the fourth round (133rd overall).

Strong is coming off an impressive season at Nevada in which he threw for 4,186 yards with 36 touchdown passes. He won the Mountain West Conference Offensive Player of the Year award in back-to-back seasons.

As he assesses his strengths, Strong knows what most teams will focus on.

“I think the interviews are probably the most important part,” Strong added. “Just watching my film teams can tell that I can throw the ball well, I have a deep ball, I can make all the throws, all that. But they want to get to know you as a player, break down your mental aspect of it.

“Some teams throw you their type of plays and see how you can remember it and spit it back to them,” said Strong, “so I think just developing relationships with all the coaches and the GMs and all that, I think that’s probably the most important part.”

Trivia: What quarterback was picked after Jarrett Stidham in the 2019 draft but has more than 5,000 more career NFL passing yards than him?

Hint: In college, he played for East Carolina before transferring to Washington State.

Tyquan Thornton’s official time was a 4.28:

On this day: In 1872, the first issue of the Boston Daily Globe was published. Here’s the front page:

Daily highlight: Ja Morant’s dunk against the Celtics on Thursday. 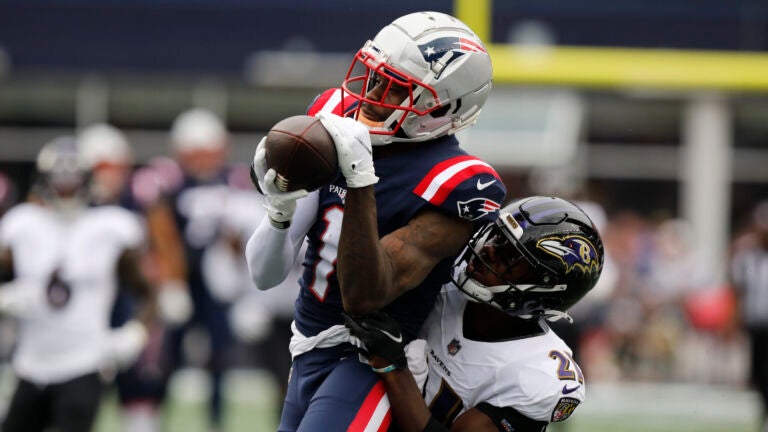