The Red Sox rallied with four runs in the bottom of the ninth inning to defeat the Rangers 9-8 on Thursday. Boston will host the Rangers again this evening at 7:10 p.m.

This weekend, Boston College football opens its season at home against Rutgers on Saturday at 12 p.m. On Sunday, the Revolution host New York City FC at 8 p.m.

It was, as Refsnyder noted afterward, his first walk-off hit for as long as he can remember.

“I remember a bunch of ones I didn’t come through,” said Refsnyder per MassLive’s Christopher Smith. “So as I got up there, I felt good about it. As good as you can about hitting a guy throwing a 101 mph sinker.”

Circumstantially, the moment arrived for Refsnyder at the end of a long and unexpectedly tiring day. The team arrived back in Boston early on Thursday after the end of a series in Minnesota.

Refsnyder said that he normally spends time with his son in the morning and is then able to nap a little bit (when his son naps) during the afternoon before heading to the ballpark.

But as his son wasn’t feeling well, Refsnyder noted that though he had been “banking on” a nap and, “I didn’t get one.”

“I didn’t sleep well at all,” he explained. “My son was pretty cranky. We got in at 5:30 in the morning. So maybe I shouldn’t sleep very well more often.”

Trivia: Only three players in Patriots history have recorded at least three defensive touchdowns in their regular season careers. Can you name them?

Hint: They all played for the 2003 and 2004 Patriots. Their colleges were: Michigan, Arizona, and Central Florida, respectively.

Atlanta rookie Spencer Strider set a team record: The 23-year-old struck out 16 (the most in a single game in team history), allowing just two hits in eight innings in a 3-0 win over the Rockies on Thursday.

On this day: In 1960, US sprinter Wilma Rudolph won the gold medal in the 100-meter dash with a time of 11.18 seconds. Dorothy Hyman of Great Britain was second, and Giuseppina Leone of Italy finished third.

Daily highlight: Maddy Theriault of Fairfield University crossed up virtually the entire Bryant University defense before tucking the ball into the corner of the net. Fairfield went on to win 2-0. 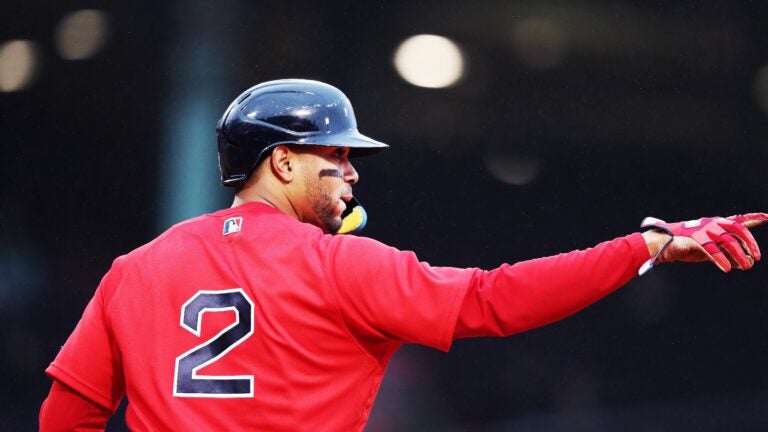