Tonight, the Celtics are in North Carolina to play the Hornets in a preseason game at 7:30 p.m.

Elsewhere, the Major League Baseball playoffs begin on Friday with the wild-card round.

On Sunday, the Patriots face the Lions (1 p.m.) at Gillette Stadium, and the Revolution will play the Chicago Fire in the team’s season finale at 2:30 p.m.

Richard Sherman’s Super Bowl XLIX reference: On Thursday, the Broncos lost to the Colts in particularly excruciating fashion. The game went to overtime after a series of mistakes by Denver — and Broncos quarterback Russell Wilson specifically — gifted the Colts a final chance to tie the game (which Indianapolis took advantage of).

After the Colts kicked a field goal on the first possession in overtime, the Broncos had an opportunity to respond. Wilson led Denver down into the red zone, but the drive stalled at the five-yard line.

Facing a 4th-and-one, the Broncos decided to go for it instead of kicking the tying field goal. Wilson attempted a pass play from a shotgun formation, but former Patriots cornerback Stephon Gilmore (now a member of the Colts) broke up the intended throw into the end zone for wide receiver Courtland Sutton.

After the game, former cornerback Richard Sherman was among the analysts discussing their thoughts on Amazon Prime’s broadcast.

Inevitably, Sherman brought up a point in both his (and Wilson’s) past: Super Bowl XLIX, in which the Seahawks lost to the Patriots 28-24.

“On the final play, you have to run the ball, again,” Sherman began. “I wish I had Marshawn up here.”

Sherman mentioning his former Seahawks teammate, Marshawn Lynch, was a reference to the memorable sequence at the end of the Super Bowl in 2015 when Seattle elected to pass at the goal line instead of running. Wilson, then the Seahawks quarterback, threw a Super Bowl-losing interception to Patriots cornerback Malcolm Butler.

“Like, one yard. You need one yard. Run the ball. Run the ball!” Sherman erupted. “All he has to do is run the football. Necessary criticism. I’ve said enough criticism for him, but got dang it, run the dang ball! Like, learn from your mistakes.”

After the game, Sherman tweeted his famous reaction to Butler’s interception as a nod to his current thoughts on Wilson and the Broncos’ mistake.

Trivia: Cornerback Richard Sherman was a fifth-round pick by the Seahawks in the 2011 NFL Draft. Can you name the first cornerback selected in that year’s draft?

Hint: Selected fifth overall, he plays for the Vikings in 2022 (which is not the team that originally drafted him).

The Red Sox end-of-season press conference: Topics includes the potential of re-signing Xander Bogaerts and how much the team prioritizes Rafael Devers.

On this day: In 1975, the Red Sox defeated the Athletics 5-3 to clinch the American League pennant. The American League Championship Series sweep of Oakland happened thanks in part to the all-around performance of Carl Yastrzemski.

The veteran outfielder contributed at the plate with a pair of hits and added to it with a great defensive play to throw out Reggie Jackson at second base.

Daily highlight: Victor Wembanyama, who is projected to potentially be the No. 1 pick in the 2023 NBA Draft, threw down a satisfyingly thunderous dunk in an exhibition game on Thursday. 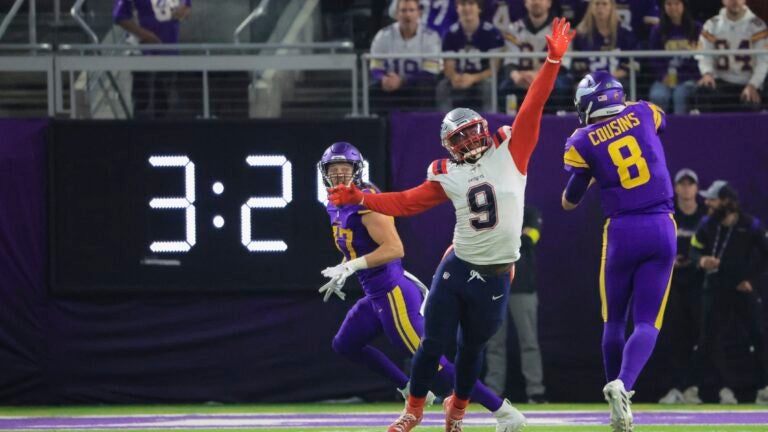