Tonight, the Bruins face the Avalanche in Colorado at 9 p.m.

And in Phoenix, the Suns will host the Celtics at 10 p.m.

In baseball news, the Red Sox drew the 14th pick in the 2023 MLB Draft Lottery on Tuesday.

Scott Boras on the Red Sox and Xander Bogaerts: A staple of the annual MLB Winter Meetings are hotel press conferences, and player agent Scott Boras’s Tuesday session at the San Diego Marriott Marquis did not disappoint:

Boras, who represents some of the biggest names in baseball (including current free agent Xander Bogaerts), acknowledged that there is an ongoing “dialogue” with the Red Sox about re-signing the shortstop.

“I don’t know their strategy,” Boras told reporters. “I just know we continue to talk and have dialogue and continue the process with them.

“The Red Sox, they kind of have four-star ownership,” he added. “These guys have proven over time that they win and they pursue winning . . . I think everyone around them understands the Sox without ‘X’ are so-so.”

According to Boston Globe Red Sox reporters Alex Speier and Peter Abraham, the team met with Boras on Monday, but not Bogaerts himself.

“Xander has had an opportunity to exercise his free agent right,” Boras explained. “He has met with a host of teams, gotten to know who he is in the eyes of many of the opponents he has played against. I think it has been a very thorough process, something that for him gave him a greater understanding of who he is in the baseball world. He has also learned the approaches of many teams and owners. The owners that have met with him have been really impressed, and he with them. It has been a real education for him in the last month or so.”

Red Sox Chief Baseball Officer Chaim Bloom has maintained that re-signing Bogaerts is the team’s “Option A” this offseason.

Yet when confronted with Boras’s play on words, Bloom acknowledged the possibility that the longtime Boston infielder could leave.

“We think we’re going to be good,” said Bloom. “We hope it’s with Xander. We really do. If that doesn’t work out, we’re still intent on being a playoff caliber team.”

And whether or not he’s serious (or indirectly negotiating through his response to a media question), Boras maintained that Bogaerts won’t wait around for a last-second Red Sox attempt to match another team’s offer.

“We’re not the matching kind. We let teams know that they have to assert,” Boras claimed. “We don’t ever hold back from reaching an agreement with any team and certainly we don’t give market preference to anyone. Otherwise, I think the free agent right would be dampened if you did.”

Trivia: One of Scott Boras’s earlier major negotiations was securing a five-year deal worth $57.5 million for what pitcher in 1997?

Hint: This pitcher, now in the Baseball Hall of Fame, was an 18-time Gold Glove winner during his career.

Aaron Judge is reportedly staying with the Yankees: Judge’s deal is for nine years and worth $360 million, according to Ken Rosenthal of The Athletic.

Shaquille O’Neal got thrown into a Christmas tree: It’s not the first time this has happened.

Dustin Pedroia called mid-interview: Alex Cora was in the middle of an interview as part of a team-filmed project when the former second baseman gave him a call.

On this day: In 2003, the Patriots defeated the Dolphins 12-0 in the wake of a nor’easter. Fans around Gillette Stadium celebrated Tedy Bruschi’s fourth quarter interception return for a touchdown by throwing snow in the air, creating a memorable atmosphere amid a dominant New England win.

Daily highlight: Achraf Hakimi nailed the winning penalty kick for Morocco in the Round of 16 World Cup shootout with Spain on Tuesday. Hakimi, grappling with the pressure of an entire nation’s hopes resting on his shoulders, cooly opted for a “Panenka” chip right down the middle. He celebrated by doing Jaylen Waddle’s touchdown dance. 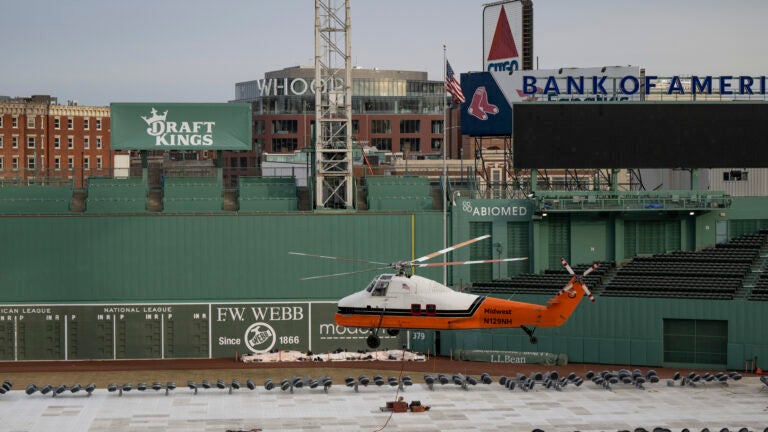