Paul George has a new home, and Russell Westbrook has a new star teammate.

The Indiana Pacers have agreed to trade George to the Oklahoma City Thunder for Victor Oladipo and Domantas Sabonis, said two people with knowledge of the details. The stunning deal gives Westbrook, the newly crowned NBA MVP, some serious help next season and makes the already rugged Western Conference even more daunting.

The two teams came together on the trade Friday just hours before the free agent market was set to open, said the people who spoke to The Associated Press on condition of anonymity because the trade was not official. It is not expected to be finalized until the moratorium ends, but that didn’t stop the rest of the league from reacting about the newest dynamic duo to form.

The entire league expected George to be on the move after he informed the Pacers of his plans to leave as a free agent next summer. That forced Kevin Pritchard, who was recently elevated to take over basketball operations after Larry Bird’s abrupt resignation, to find a trade before losing him for nothing. Pritchard called George’s decision “a gut punch,” but didn’t panic. He resisted offers on draft night, when many analysts said he would get the best package, and waited until just before the free agent market’s opening bell.

To the Thunder to team up with Westbrook? That was a stunner.

The trade was first reported by ESPN.

George could have been in line for the so-called “Supermax” extension — a five-year pact worth about $205 million — with Indiana this summer, had he been voted onto the All-NBA team this offseason.

He wasn’t, though if he is an All-NBA player next season — which is certainly possible with the numbers he could post playing alongside Westbrook — George would be eligible for a huge payday again. And the irony there is that if he is set on joining the Los Angeles Lakers in 2018, as has been reported for some time, George would miss out on that massive extra windfall.

George is the second Eastern Conference All-Star from this past season to join the already-loaded Western Conference in the last few days. Jimmy Butler was traded by Chicago to Minnesota on draft night.

In the East, that certainly seems to be the case.

But the West just keeps getting tougher and tougher. The Wolves grabbed Butler, the Houston Rockets traded for Chris Paul to pair with James Harden and the Warriors locked up two vital championship pieces in Steph Curry and Shaun Livingston just after the market opened Saturday.

Thunder GM Sam Presti then went all-in in a manner he has yet to do in Oklahoma City, putting two of the league’s best athletes together to make a run at Golden State. George’s defensive versatility and shot-making alongside Westbrook’s explosiveness and competitive intensity creates an imposing tandem.

George broke his left leg in a gruesome scene while playing with USA Basketball in Las Vegas in 2014, which prompted fears he would never be the same. Those fears were most unfounded, since George has better than ever in the last two seasons — averaging 23.1 points and 7.0 rebounds in 2015-16, and following that up with averages of 23.7 points and 6.6 rebounds this past season.

He’s been to the playoffs six times, getting to the East finals twice and losing to Miami each time.

Indiana will be Oladipo’s third team, after starting his career in Orlando and spending last season in Oklahoma City. He’s averaged 15.9 points per game in his four pro seasons, on 43 percent shooting and returns to the state where he starred in college for the Hoosiers.

Sabonis started 66 games as a rookie last season with the Thunder, averaging 5.9 points.

The deal drew strong reactions from all corners, perhaps none funnier than a tweet by the Oklahoma City Police Department.

“Thanks for the tweets reporting the ‘theft’ of Paul George by @okcthunder,” the tweet read. “Our investigative findings: totally legal (and) very savvy.” 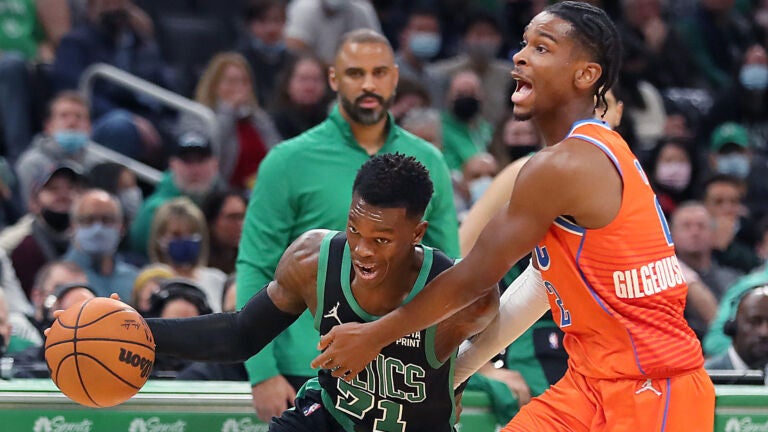