LAS VEGAS (AP) — Zach LaVine is staying in Chicago, with one of the biggest deals of free agency this summer now complete.

The Bulls on Sunday formally matched the four-year, $80 million offer sheet LaVine signed with the Sacramento Kings, a move that was expected almost from the instant the restricted free agent got the offer.

LaVine is one of only six free agents to get deals worth that much so far this summer, joining Chris Paul ($160 million), LeBron James ($153 million), Nikola Jokic ($148 million), Paul George ($137 million) and Aaron Gordon ($80 million). Phoenix’s Devin Booker signed a $158 million deal as well, his coming in the form of an extension and not through a foray into free agency.

LaVine has missed 91 of a possible 162 games over the past two seasons because of injuries, and the Bulls will have some language in this contract protecting them if his surgically repaired left knee remains problematic.

“Zach showed a relentless work ethic in rehabbing his ACL injury to return to the court, and he has a visible passion for the game of basketball,” Bulls vice president of basketball operations John Paxson said. “We know that those attributes, along with his honed skills, will make him an impact player in this league for years to come. We’re thrilled to keep Zach on this Bulls team moving forward.”

LaVine appeared in only 24 games for the Bulls last season, averaging 16.7 points on 38 percent shooting. The Bulls acquired LaVine a year ago, as part of the trade that sent Jimmy Butler from Chicago to Minnesota.

“We’re excited now that we get to keep him,” Paxson said.

Deals have continued coming at a relatively slow pace since the July 1 opening day of free agency, when basically $1 billion in new contracts were agreed to in 24 hours — and only $400 million or so more in deals have been struck since.

Paul’s four-year, $160 million deal to stay in Houston was officially signed Sunday. He announced that he agreed to the terms of that contract right at 12:01 EDT on July 1, when free agency was officially beginning.

Both deals were confirmed to The Associated Press by people directly involved in the negotiations, both of whom spoke on condition of anonymity because neither had been formally announced by the clubs involved. 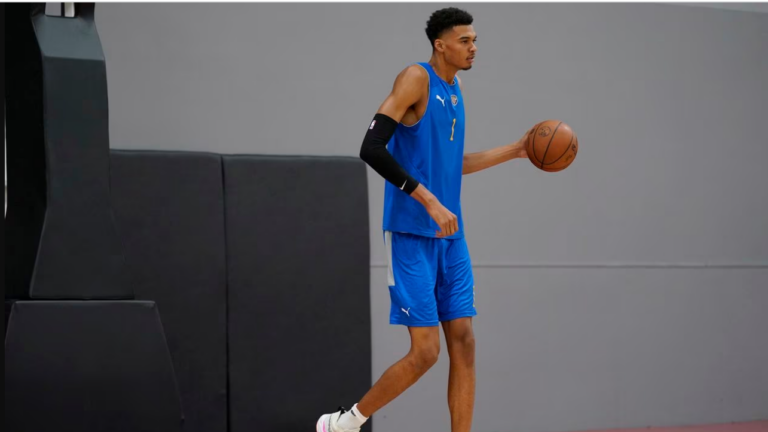 The Kyrie Irving sweepstakes are over. Let the Victor Wembanyama race begin.