EL SEGUNDO, Calif. (AP) — LeBron James realizes the size of the challenge he accepted when he joined the Los Angeles Lakers. After eight consecutive NBA Finals appearances, he knows his new team isn’t a true contender with Golden State and the NBA’s elite just yet.

The superstar welcomed every step in the process Monday as he began his next chapter in purple and gold.

James finally made his first formal appearance as a member of the Lakers at their media day, nearly three months after he left Cleveland for a four-year, $153.3 million free-agent deal. In between posing for photos in his new gold No. 23 uniform, the 33-year-old superstar revealed part of the motivation behind his decision to join an iconic franchise that hasn’t made the playoffs in five years.

“No matter what uniform I’m in, I’m always humbled that I’m able to play this game at this level,” James said. “I think we all know that this franchise has been a historical franchise in this league for years. … That’s an excitement in its own right. And then it’s just always humbling for me when I get a chance to be a part of something special.”

The burgeoning entertainment mogul also politely scoffed at the notion his numerous interests in film and television production would be any distraction from his day job. Moving to Hollywood was not his motivation for going West, he insisted.

“My decision was based solely on my family and the Lakers,” James said. “I’m a basketball player. I play ball. That’s what I do.”

James joined the Lakers along with veterans Rajon Rondo, JaVale McGee, Lance Stephenson and Michael Beasley this summer. They’ll team up with the Lakers’ talented young core to change the face of a 16-time champion franchise emerging from the worst half-decade in its lengthy history.

But James made it perfectly clear he won’t judge his achievements in Los Angeles solely on championships, particularly not during these Lakers’ first season together.

“I don’t believe the only thing that’s a success in marking a season is winning a championship,” James said. “There’s only one champion, but that doesn’t mean you’re not successful. There’s going to be wins and losses, but what you control is how you prepare every day.

“We’re a new ballclub coming together. They have some returning guys, but as far as the ballclub, we’re all new to each other. So we have to take our bumps and our bruises. There’s going to be good times. There’s going to be bad times. That’s what happens when a team is new. But if we continue to work the process and we continue to sacrifice for one another and put in the commitment and the time to being great, everything else will fall into place.”

This perspective contrasts sharply with the ring-or-bust mentality held by Kobe Bryant, the last superstar to wear this uniform. Two seasons after Bryant’s retirement, the Lakers have been replenished by the arrival of James and the veterans that he assembled around him.

“I think this is a great start for the Lakers to get back to championship caliber,” said McGee, who just won two championship rings in Golden State. “For me personally, I feel like this is everybody’s dream as a basketball player, to put on the purple and gold and compete for a championship.”

But on their first formal day together, nobody suggested the Lakers are remotely ready to compete with the Warriors, who would have four consecutive championships if James hadn’t won the Cavs’ first championship in legendary fashion instead in 2016. 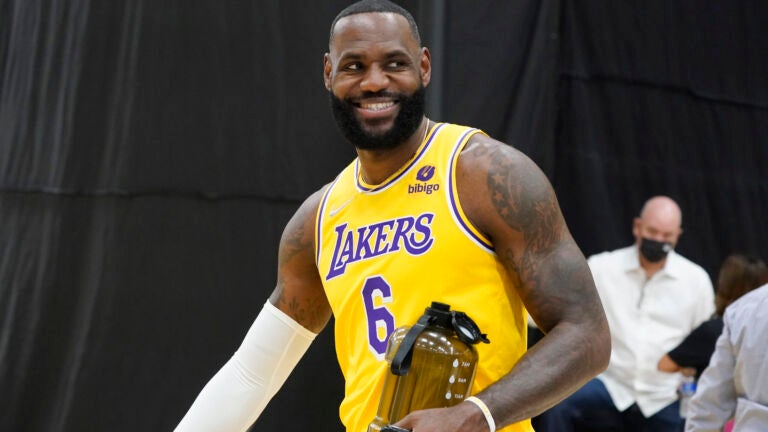 LeBron James says he has been vaccinated