ROME (AP) — In the country where he grew up, Kobe Bryant will be mourned for an entire week.

The Italian basketball federation said Monday it has ordered a minute’s silence to be observed for all games “in every category for the entire week.”

“It’s a small but heartfelt and deserved gesture to honor the life and memory of Kobe Bryant, an absolute champion who always had Italy in his heart,” the federation said. “Kobe was and will always be linked to our country.”

Bryant lived in Italy between the ages of 6 and 13 while his father, Joe Bryant, played for several teams in the country. He returned to Pennsylvania for high school.

Kobe Bryant spoke fluent Italian and often said it would be a “dream” to play in the country.

That dream almost came true when Bryant nearly joined Virtus Bologna in 2011 during an NBA lockout, only for the deal to fall apart.

Bryant, an 18-time NBA All-Star who won five championships and became one of the greatest basketball players of his generation during a 20-year career with the Los Angeles Lakers, died Sunday with his 13-year-old daughter, Gianna, in a helicopter crash near Calabasas, California. He was 41.

“All of the NBA players are important, because they’re legends, but he’s particularly important to us because he knew Italy so well, having lived in several cities here,” Italian federation president Giovanni Petrucci told The Associated Press late Sunday night.

“He had a lot of Italian qualities,” Petrucci added. “He spoke Italian very well. He even knew the local slang.”

Pistoia, one of the teams that Joe Bryant played for, tweeted a message with a picture of Kobe Bryant during a recent trip to the Tuscan town.

“We saw him play at the PalaCarrara during halftime of his father Joe’s games,” Pistoia said. “He had a strong bond with the city of Pistoia and it was just a few years ago that he came to pay us a visit. May the earth rest lightly on you #Kobe.”

Italian coach Ettore Messina worked with Bryant as an assistant for the Lakers.

“He was a supernatural,” Messina told the AP late Sunday while traveling with his current club, Olimpia Milano.

“To hear him speak and joke in our language and to remember when his father played here and he was a kid drew a lot of people to the NBA,” Messina said. “He was also always very attentive to help Italian kids arriving in the NBA and to help them enter such a tough and competitive world. He also did that with me when I arrived at the Lakers and I’m still very grateful to him for that. It’s very sad that his family has been devastated like this.” 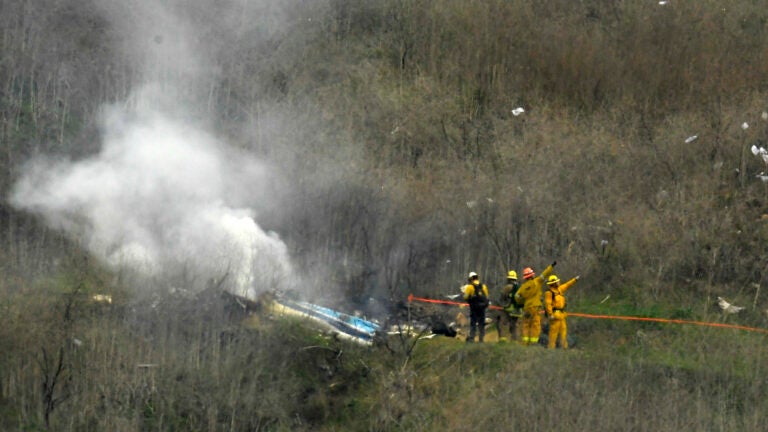