Arlington and St. John’s Prep product Pat Connaughton will represent the Milwaukeee Bucks in the NBA’s Slam Dunk Contest this Saturday, Feb. 15. The event is scheduled for 9 p.m. at the United Center in Chicago and will air on TNT.

Connaughton, 27, will be up against Dwight Howard, Aaron Gordon, and Derrick Jones, Jr. Before the contest, he spoke over the phone with Boston.com to discuss his evolution as a dunker, his inspiration, his approach, and much more.

Here’s what he had to say:

Boston.com: What was it like growing up in Arlington?

Pat Connaughton: To be honest, growing up in Arlington was one of my favorite, if not my favorite, memory of sports. I think the town itself was competitive. I think they did youth sports right. From Fidelity House to Little League, everything was done in a very fun, but very competitive way. From an early age, that taught me the importance of having a competitive nature. It taught me the importance of team, but also hard work and all those sorts of things. The friends that I made in Arlington are still some of my best friends today.

BDC: How old were you when you first dunked and how did your journey as a dunker take off from there?

PC: My first dunk was in eighth grade, at Fidelity House, actually. When I was in sixth grade, I read a Sports Illustrated article about Vince Carter, who was able to dunk by eighth grade. It might have been by sixth grade, but in my head it was eighth grade. I was trying to be a little realistic. I approached my dad and said, “Hey, I want to dunk.” I thought it was one of the coolest things, and I wanted to be able to do it. He sat me down and said, “Hey, look, you can’t just decide you want to dunk. It’s going to be a lot of hard work, and there’s going to be a lot of things that you have to put into it. But if you want to put the work in, then you might be able to do it.” 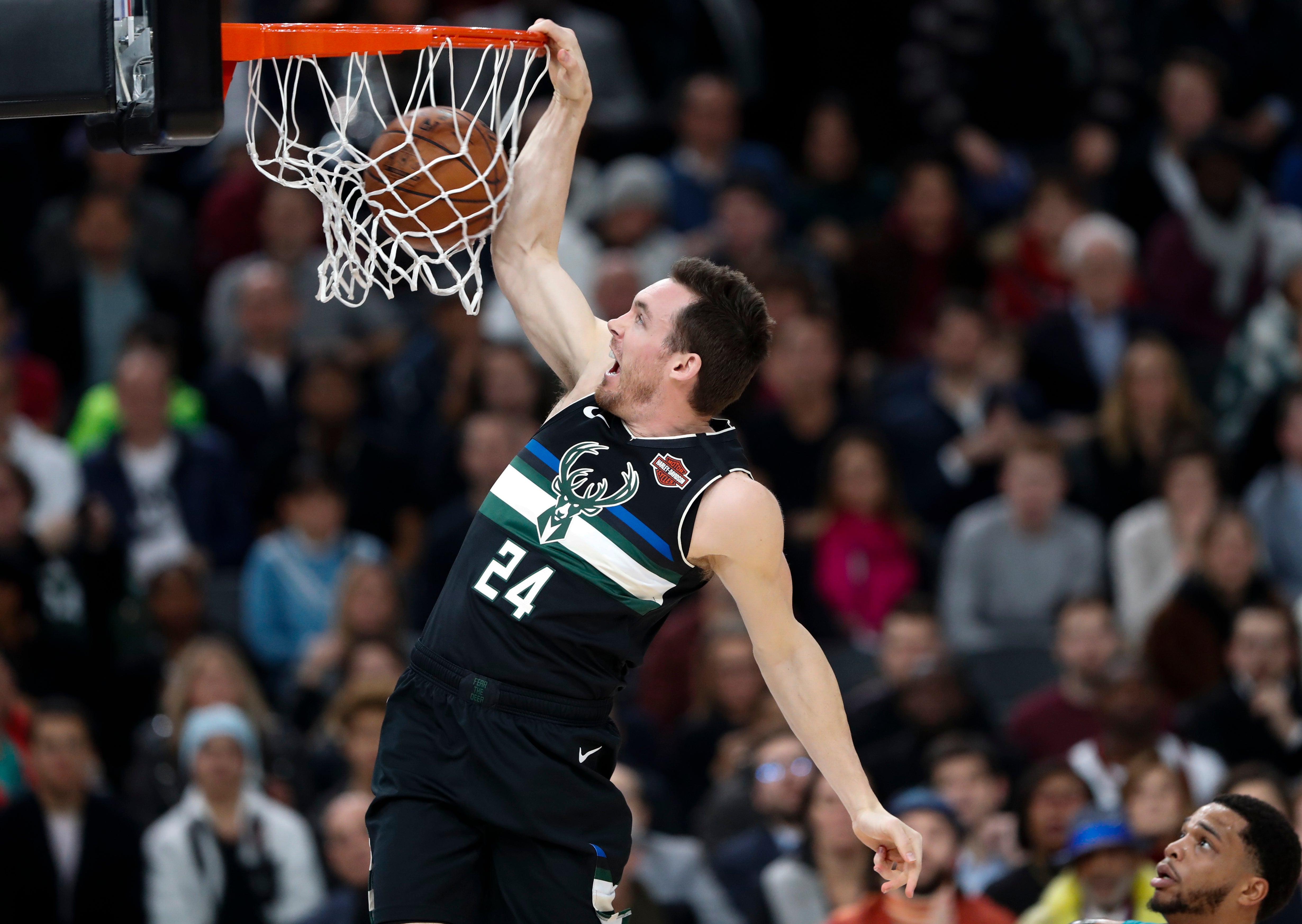 BDC: Nowadays, how often do you practice dunking? Do you work on that particular skill a lot?

PC: It depends. I would say that when it comes to dunking itself, whether it be after practice randomly or in the summer when you’re working out with different guys, you finish a game of pickup or some skills and drills workout, whatever it may be, there’s always randomly breakouts into who can do what dunk. Guys take turns of going to the rim and trying to show what they can do. I’d say that plays a role into it.

I’d say the biggest thing is just working out. As far as working on my jumping and explosive ability, I do that at home in the summer at Athletic Evolution, with a guy Eric Kaloyanides, who I’ve been training with since I was a freshman in high school. I try to stay loyal to the roots that I came from. He’s helped me work on my jumping ability, not just two legs, but one leg, and things that are going to translate to NBA basketball games so I can do dunks during the game.

BDC: I’m sure it’s tough to choose, but what’s your favorite in-game dunk at any level?

PC: Ooh, that’s a tough one. One of my buddies is going to kill me for this, but I’d say one of my favorites is when I was in high school. I was playing for Fidelity House, and I was a freshman. We lost to BABC, obviously a really well-known AAU program back home. It was a close game, but they had definitely won. At the end of the game, I got an outlet pass, and I just wanted to dunk because no one expected me to be able to. I kind of had a breakaway, and Nerlens Noel, one of my buddies, who obviously is a phenomenal player and plays in the league now as well, tried to chase me down and block it. He didn’t want me to have a free dunk at the end of the game. We kind of lined each other up, and I ended up dunking on him. His whole team, the whole stands, everyone went nuts. It was kind of funny, because no one was expecting me to dunk on a guy so much bigger than I was. It was basically like we won the game. Now, I still remember we lost, because I wanted to win the damn game, but the dunk itself was at least a little bit of a moral victory.

BDC: I’d imagine people have been shocked like that over the years when you go up and dunk in games. What’s it been like to prove people wrong your whole life?

PC: Yeah, definitely. I don’t want to say I do anything because my sole goal is to prove other people wrong. I mean, I’d say I do things more for myself and to make the people that are close to me proud, things like that. But having that chip on your shoulder and being able to prove somebody wrong definitely helps add to it with everything. It started with dunking at a young age, but it’s moved up the chain. No one expected me to play Division 1 college basketball. No one expected me to have a chance in the NBA. No one expected me to be a rotation player on one of the best teams in the league.

When you incorporate dunking into that, too, that was kind of the mini, same type of situation that I’ve had ever since I was able to dunk back in eighth grade, ever since my high school career at St. John’s Prep. Some of the alley-oops, some of the dunks that I had when we would play at Charlestown, at Central Catholic, games like that, where no one’s expecting this kid to dunk, for whatever the reason, stereotypes might play a role in that. But at the end of the day, my athleticism is something I’ve always prided myself on, and I’ve really worked hard on, and something I want to make sure people see.

BDC: What’s your relationship like with Giannis? Who’s the better dunker, straight-up?

PC: He’s definitely the better dunker, straight-up. He’s got me beat a little bit on height, length, and a few other things. I would say my dunks might be a little more impressive coming from a 6’5 kid than a 7-footer, 6’11 guy, but he’s great.

He’s obviously the leader of our team, but ever since I got here, since my first day last year, I pride myself on hard work and putting in extra work and things that I have to do in order to make sure I have success at this level. Giannis is the MVP of the league, and all of last year and this year, when I come in for extra lifts, or I come in to shoot extra at night, whatever it may be, he’s been there. I think that speaks magnitudes to the character that he has, the personality he has, and the way that he carries himself. Guys with that talent, guys with that MVP-caliber ability, don’t always have to do that and don’t always do it, but he works like he’s a rotation guy. He works like he’s a guy coming off the bench. He works like he’s the 13th guy on the roster. When you couple that with his talent, and his physical ability, I think that’s why he is as good as he is, and that’s why we’re as good as we are. We follow him, and we see him as our leader.

BDC: I’m sure the dunk contest was always a pipe dream, something you’ve had in the back of your mind, but how crazy is it that you’re actually going to be in it?

PC: I don’t think it’s really set in yet, to be honest with you. We still have games left before the All-Star break. While I’m trying to be creative and think about the dunks that I’m going to do, I want to make sure that I perform well to help my team win these next games. It’s definitely always been a dream of mine. It’s a contest I always watched. Being a kid from Arlington that had a dream of dunking by eighth grade, the dunk contest was always something that I tuned in for. It was one of my favorite nights of the year, sitting at home with my mom and my dad watching it, having a few chicken fingers from Papa Gino’s from downtown or something. Now to be able to say that I’m going to perform in it, and hopefully put on a show in it, hopefully continue to prove that stereotype wrong, I think will be pretty amazing. It will be a pretty crazy experience.

BDC: Do you have a favorite dunk contest or dunker of all-time? Is there anyone in particular who’s inspired you?

PC: Yeah, I think Vince Carter, when he won it. He stuck his elbow in the rim, he did the reverse 360 windmill, between the legs, called game, said it was over. That was one of my most memorable ones, one that I remember growing up, one that I’ve re-watched a few times.

BDC: What are you planning to do Saturday night? I know you can’t reveal your deepest secrets, but what’s your general game plan? Are you planning on props or no props?

PC: I think you’ve got to have a mixture of both nowadays. I want to be a showman, but I want to make sure it’s not all about the props, all about the showmanship, it’s about the dunks themselves as well. All I’ll say is I’ll have some dunks that are organic to me. I’ll play into the underdog role a little bit. I’ll play into the 6’5 Irish guy, if you will. I’ll play into some of my other abilities. I’ll have some fun with it. I’ll make sure, at the end of the day, we put on a show, and some of the dunks catch people by surprise and hopefully get the crowd on my side.

BDC: People who watch the NBA know you well, but many others will be seeing you for the first time. What would it be like to win it and prove that white men can, in fact, jump? You must be excited to have the chance to prove people wrong again.

PC: Yeah, definitely. I never get involved with something without the goal and the hope and the drive to win it. At the same time, I’ve got to have fun with it, but the hope is I take a few people by surprise. Like you said, those who tune into NBA basketball, those who are fans of the Bucks or fans of me from back home or Notre Dame, they know I can jump. I would say as a whole, not many people do. It might catch them by surprise, which is one of the cool reasons to do it and to be able to have success in it, hopefully. It will be something that maybe they’ll come out with a sequel of “White Men Can’t Jump.”