It started as a joke: Before leaving a post-practice interview session Rudy Gobert touched all the tape recorders that were placed before him on a table, devices that reporters who cover the Utah Jazz were using during an availability with him on Monday before a game with the Detroit Pistons.

So…here is Rudy touching all the mics following Mondays shoot around that has some people concerned… #TakeNote #utahjazz #CoronaVirus pic.twitter.com/dr4auECTr4

It isn’t so funny now.

Gobert is now the NBA’s Patient Zero for coronavirus after becoming the first player in the league to test positive, a person with knowledge of the situation told The Associated Press.

The 7-foot-1 Frenchman is at the center of why the league has been shut down for the foreseeable future:

— Utah’s game against Oklahoma City Wednesday night was canceled and the Pistons are among five teams that have played the Jazz — and Gobert — since the start of March, the others being Boston, Toronto, New York and Cleveland.

— Gobert shared the court with 50 opposing players in those games, plus 15 referees.

— One of the refs was Courtney Kirkland, who was to work the New Orleans-Sacramento game on Wednesday that got canceled because he had been on the court with Gobert two nights earlier, and who knows how many ballboys, stato-crew employees, security guards, attendants and others did as well.

— Then there’s Gobert’s own teammates and the Jazz coaches and staff. And everyone he’s been on a plane with in recent days. Or shared a hotel elevator with. Or dined with. Or shook hands with. And so on, and so on.

“I’m sure I probably had contact with him,” Detroit’s Langston Galloway said.

He added, “Staying focused on that moment of interaction with a lot of different people and knowing that at the end of the day you might have touched the ball, you might have interacted with a fan and just being (cautious) with that going forward.”

The shutdown could cost teams well into the hundreds of millions of dollars depending on how long the shutdown lasts. Those teams that have faced Gobert in recent days will likely face some testing. And some of those Jazz reporters said they were getting tested for COVID-19, just in case.

“It’s unprecedented,” Detroit Pistons coach Dwane Casey said. “I think it’s the prudent thing to do. And what went on in Utah, I don’t know all the information but that just shows you how fragile everything is right now.”

This is the reality of the coronavirus, which was labeled a pandemic by the World Health Organization on Wednesday weeks after beginning its havoc-wreaking global run that has sickened well over 100,000 and killed more than 4,000.

Charlotte coach James Borrego said these are scary times in the NBA, and no one argued.

“They’re all concerned and rightfully so,” Casey said. “Everybody in our league should be concerned. I think everybody in our country right now, more than just basketball, is concerned. We all have to take care of ourselves and look out for our fellow man.”

Fournier, a French national teammate of Gobert’s, reached out to him after news of the diagnosis and leaguewide shutdown broke.

“Was just on the phone with Rudy,” Fournier wrote. “He is doing good man. Lets not (panic) everyone. Love you all.” 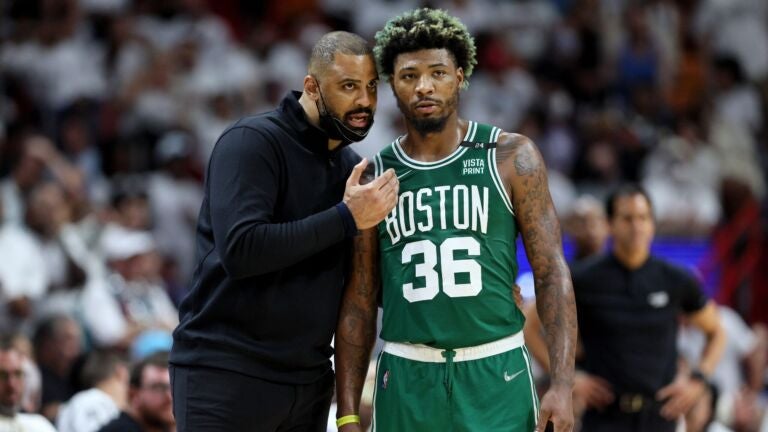