The congratulations are coming in for the Los Angeles Lakers. They defeated the Miami Heat, 106-93, in Game 6 of the NBA Finals to take home the Larry O’Brien Trophy.

Celtics legend Bill Russell, who has won the most titles in NBA history with 11, sent his congratulations to the Lakers moments after their victory Sunday night. He also congratulated LeBron James for winning the Bill Russell Finals Most Valuable Player Award.

Russell, who has presented the Finals MVP trophy to the winner every year since the award was named after him in 2009, was not in the league’s Orlando bubble due to health and safety concerns due to COVID-19.

Instead, Russell, who is 86, sent his congratulations through a video on Twitter.

“I’m sorry I couldn’t be in the bubble, but I wanted to say congratulations to LeBron James for winning the Bill Russell award,” Russell said.

It’s odd not being @ #NBAFinals but @MiamiHEAT put up a good fight Strange times in the @NBA Bubble. I may not be there but I want to say Congratulations to @KingJames for winning the #BillRussellFinalsMVPaward & Congratulations to the @lakers #ForKobeAndGigi #MambaOut @NBAonABC pic.twitter.com/p91H7Td3t0

Russell wore a cap with a yellow heart and the letters “KB”, the initials of Lakers great Kobe Bryant, who passed away in a tragic helicopter crash earlier this year. Russell wrote in his tweet “#ForKobeAndGigi #MambaOut.” 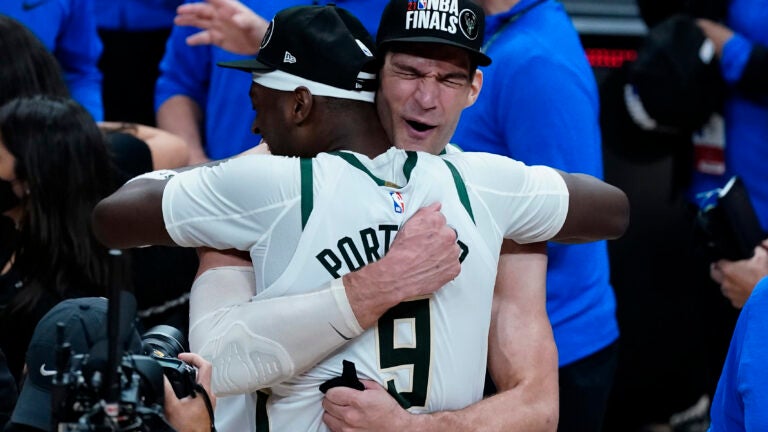 The NBA Finals: 10 things to know about Bucks vs. Suns