In a rare scene given that most NBA games this season are being played in empty arenas because of the coronavirus pandemic, several fans in courtside seats in Atlanta were ejected Monday night following a verbal interaction with Los Angeles Lakers star LeBron James.

With a little more than eight minutes remaining in the fourth quarter of the Lakers’ 107-99 victory over the Atlanta Hawks at State Farm Arena, James exchanged words with Chris and Juliana Carlos. During the exchange, Juliana Carlos pulled down her face mask to shout at James. The on-court referees then huddled with arena security, who escorted the fans away from the court.

In a series of profanity-laced videos posted to her Instagram account, Juliana Carlos said she was shouting at James to defend her husband, whom she described as a “Hawks fan” who has “been watching the games for 10 years” and “has this issue with LeBron.” She went on to say she was “minding my own business” when James and Chris Carlos shouted at each other, leading to a second exchange between James and Juliana Carlos.

“All of a sudden, I’m getting kicked out,” Juliana Carlos said. “Excuse me, I have courtside seats that I pay for. F— you, LeBron. … You’re going to let a 25-year-old girl intimidate you during a game?”

James, who finished with 21 points, seven rebounds and nine assists, brushed off the exchange during his postgame comments, referred to the initial conversation as “a back-and-forth between two grown men.”

Medical experts believe the coronavirus spreads more quickly indoors and when people are speaking in proximity without face coverings. While NBA players aren’t required to wear masks while playing, the league’s tightened health protocols require players to wear masks while on the bench and to strictly limit their interactions with the general public while at home and on road trips. James said he believed he and his teammates maintained an appropriate social distance from the fans during the argument.

“You obviously can’t have fans taking off their masks and shouting at our players during these times,” Lakers Coach Frank Vogel said.

The Hawks are one of a handful of teams allowing limited fan attendance. On Jan. 26, the Hawks announced they would open State Farm Arena seating to 1,300 season ticket holders, or 8 percent of capacity. As part of the arena’s safety protocols, fans are required to wear face coverings and maintain physical distancing, and the building has been equipped with “increased cleaning and sanitization procedures” such as “touchless restrooms and hand sanitizer stations.”

“We are employing elevated health and safety protocols as well as leveraging the vast industry expertise of Emory Healthcare so that we are ready for a gradual and safe return of fans to our home games,” Hawks executive Andrew Saltzman said in a statement. 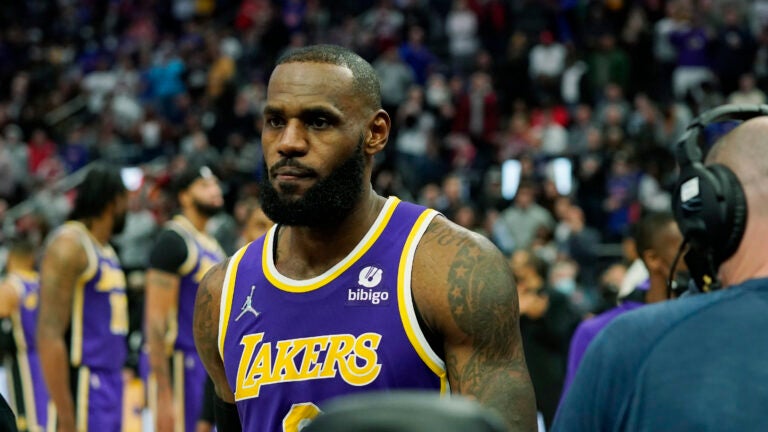