Charlotte Hornets star Gordon Hayward suffered a right foot sprain Friday against the Indiana Pacers and will be reevaluated in four weeks, the team announced Saturday.

The injury occurred when he stepped on the foot of Myles Turner and slipped to the floor in the second quarter of Charlotte’s win.

As the Hornets jockey for prime Eastern Conference playoff positioning, they’ll do so without one of their best and most experienced players.

The former Celtics forward is averaging 19.6 points, 5.9 rebounds, and 4.1 assists in 44 starts this season. Boston sent him to Charlotte in a sign-and-trade in late November, and he’s helped the Hornets leapfrog the Celtics and other teams and ascend to the No. 4 spot in the Eastern Conference as of Saturday afternoon.

Hayward had a history of untimely injuries while with Boston. He dislocated his left ankle and fractured his left tibia in his first regular-season game with the Celtics and missed essentially the entire 2017-18 season.

He suffered a broken bone in his left hand in November 2019, then he dealt with nerve issues in his previously injured left foot about a month later. Hayward missed 12 of the Celtics’ 17 playoff games in the NBA bubble last year after spraining his right ankle in the first round.

OFFICIAL: Gordon Hayward has suffered a right foot sprain. He will be reevaluated in approximately four weeks.https://t.co/auTWCgun7u | @NovantHealth pic.twitter.com/rYMna06kUU

He then suffered an avulsion fracture on the fifth metacarpal of his right hand this past December with the Hornets. While on the court, he and fellow former Celtic Terry Rozier have helped the Hornets emerge as one of the surprise teams in the NBA this season.

Hayward, who signed a four-year, $120 million deal with the Hornets in November, will likely be out until at least May, potentially longer.

The Celtics and Hornets are scheduled to meet Sunday at 6 p.m. It would have been Hayward’s first time playing in Boston since he departed, but that milestone will have to wait. 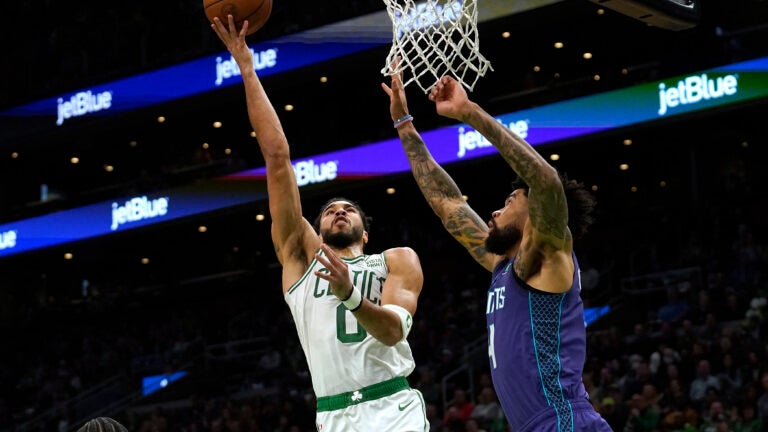