PHILADELPHIA – Russell Westbrook, Bradley Beal and LeBron James called for the NBA to protect its players in the wake of an incident Wednesday in which a fan poured popcorn on Westbrook’s head and the point guard had to be restrained from responding.

Westbrook said he twisted his ankle with 10:29 left to play in the Wizards’ 120-95 loss in Game 2 of their first-round matchup against the Philadelphia 76ers. Westbrook was gingerly walking to the locker room, escorted by team personnel and Wells Fargo Center staff, when the incident occurred. A video of the moment later circulated online and stirred a variety of responses from NBA fans, media members and players.

Westbrook said the fan crossed a line, and he expressed frustration that he was kept from responding when spectators are allowed more freedom to do and say what they like when attending games.

“Unfortunately, I was leaving off and I felt popcorn on top of my head. To be completely honest, man, this s— is getting out of hand,” Westbrook said. “Especially for me, the amount of disrespect, the amount of fans just doing whatever the f— they want to do. . . . In any other setting, I’m all for fans enjoying the game. It’s part of sports, I get it. But there are some things that cross the line. In any other setting, I know for a fact that fans … they wouldn’t come up, a guy wouldn’t come up on the street and pour popcorn on my head. Because we’d know what happen. A guy is going to come up to me, [say something to] me about my kids, my family, on the street, it’d be possibly different. At these arenas, we’ve got to start protecting these players, man.

“We’ll see what the NBA does. There’s a huge [double-standard] for us as players, at least for me. The fans, they say whatever, and the consequences for me are a lot more instrumental than to those people in the stands, because they feel like they’re untouchable. They can still do [whatever they want], because they’re at a sporting event and they can enjoy the game. A lot of times, fans don’t realize this is our job. This is my job. . . . So to get food thrown on top of me, it’s just bulls—. Fortunately, I couldn’t get to the stands. But I just don’t take that lying down, man. To me, it happens a lot of times. Obviously I’ve learned to put it away to a certain extent, but I can’t just keep looking the other way.”

LeBron James, during the Los Angeles Lakers’ night off from their first-round series, weighed in with similar pleas for the league to take action.

“By the way WE AS THE PLAYERS wanna see who threw that popcorn on Russ while he was leaving the game tonight with a injury!!” James tweeted. “There’s cameras all over arenas so there’s no excuse! Cause if the [shoe emoji] was on the other [foot emoji]. #ProtectOurPlayers.”

According to the NBA rule book, players, coaches, trainers and any other person on a team bench who deliberately enters the stands during a game faces automatic ejection.

The rule book specifies that any spectator who verbally abuses players or coaches “in a manner which, in the opinion of the game officials, interferes with the ability of a coach to communicate with his players during the game and/or huddles, will, at the direction of the crew chief, be given one warning by a building security officer. If the same spectator continues to behave in a like manner, the crew chief shall direct a building security officer to eject the spectator from the arena.”

A spokesman for Wells Fargo Center did not immediately respond to an inquiry as to whether the fan had been ejected from the arena. Westbrook said he saw the fan “run away.”

Valerie Camillo, the president of business operations at the arena, also issued a statement on Twitter.

“This was classless, unacceptable behavior, and we’re not going to tolerate it at Wells Fargo Center. We’re proud to have some of the most passionate fans in the country and the best home-court and home-ice advantage around, but this type of behavior has no place in our arena.”

Wednesday wasn’t the first time Westbrook has had a run-in with a fan on Philadelphia’s home court. On the season’s opening day four years ago, a fan seated courtside got out of his seat, approached Westbrook and flashed both middle fingers at the then-Oklahoma City star. The fan was ejected.

In 2019, Westbrook was fined &#36;25,000 for directing profanity and threatening language at a fan. Westbrook said the fan, who was later banned from attending events at Vivint Arena in Salt Lake City, heckled him with racist and profane comments.

Westbrook’s backcourt mate Bradley Beal said he was frustrated Wednesday by fans directing trash talk at him while seated near his toddler children.

“… Granted, [it] may be one bad apple, whatever the case may be, but that’s still not a good look for the city, and for the team, [for] all fans,” Beal said. “. . .I had crazy language spoken to me tonight, and my kids were sitting next to them. Part of me wanted to go over there and say: ‘Who are you talking to. I’m a grown-ass man.’ But we can’t do that. We focus on the game, we control what we can control, but at the end of the day, we’ve got to protect the players. There’s a million cameras in here. There’s no way we can’t find out who did it, and there’s no way they should be able to step into an arena anywhere in the U.S.” 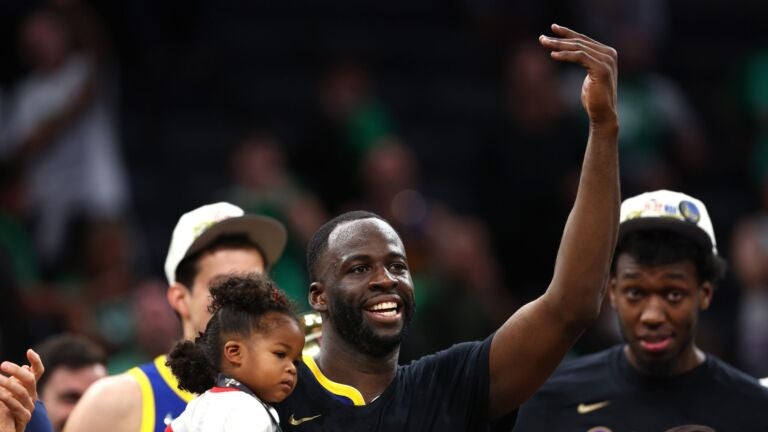 ‘I appreciate this fanbase’: Draymond Green gives ‘kudos’ to Celtics fans after back-and-forth during Finals