DALLAS (AP) — Loyola-Chicago’s Sweet 16 dreams bounced on the front of the rim, lightly touched the backboard, and rattled a couple times before slipping through the net.

Another prayer answered in the waning seconds, and now Sister Jean’s Ramblers are heading to Atlanta.

“I’m told them that we were going to win, that we could do it & that God would be on our side.”

Sister Jean on her pregame speech to @RamblersMBB. #MarchMadness pic.twitter.com/pPUzTDO5L6

Custer’s winner came two days after Donte Ingram’s buzzer-beating 3 from the March Madness logo against Miami, surely to the delight of Sister Jean Dolores Schmidt, the team chaplain and occasional coach, watching from her wheelchair on a platform near the main TV cameras.

“The only thing I can say, glory to God for that one,” Custer said. “The ball bounced on the rim and I got a good bounce.”

The Ramblers were the long-shot story of the first round — until 16th-seed UMBC beat No. 1 Virginia to pull off the biggest upset in NCAA Tournament history. That’ll be hard for the Ramblers (30-5) to top, but they’re working on it.

The Missouri Valley champions broke the school record for wins set by the 1963 NCAA championship team. The small Catholic college in the heart of Chicago will play the Cincinnati-Nevada winner in the regional semifinals Thursday in Atlanta.

“Of course,” Schmidt said when asked if she’ll be with the team.

No. 3 seed Tennessee (26-7) took its only lead of the second half on a three-point play by Grant Williams with 20 seconds remaining.

After Loyola almost lost the ball on an out-of-bounds call confirmed on replay, Custer took the inbounds pass with 10 seconds left, dribbled left and then right, pulled up and let go of the winner.

The Vols’ Jordan Bone got a decent look at last-gasp 3, but it bounced away, and Custer threw the ball off the scoreboard high above the court as he was mobbed by teammates in the same spot that the Ramblers celebrated Ingram’s dramatic winner.

“I’ve seen him make one, two dribble, one-two pull-up probably a million times,” said Ben Richardson, who won two high school state championships with Custer in Kansas and has been his teammate since third grade. “He makes it like a 98 percent clip.”

The Ramblers fell behind 15-6 in less than 5 minutes before the Volunteers missed their next nine shots and fell behind for the first time on Custer’s 3-pointer with 6 minutes left in the first half.

Admiral Schofield scored 11 of those first 15 Tennessee points but didn’t score again until a 3 nearly 32 minutes later that started a rally from a 10-point deficit in the final 4 minutes by the SEC regular-season co-champions.

Tennessee coach Rick Barnes lost at American Airlines Center, home of the NBA’s Dallas Mavericks, for the first time in six NCAA games. The first four wins were during his 17 seasons leading the Texas Longhorns.

Schmidt, a high school basketball player in San Francisco in the 1930s who leads the pregame prayer and gives the players feedback after, wasn’t the only one pulling hard for Loyola.

Late-arriving fans waiting for crowd favorite Texas Tech in the late game joined the raucous Ramblers supporters wearing maroon-and-gold scarfs and standing almost the entire game in sections across the court from their team’s bench.

“It’s great to get some exposure for our school and our fans,” Richardson said. “And on the national stage, we know there’s so many loyal fans that have come up to us, that have been fans since ’63, the national championship team, and they’re so proud of us.”

Aundre Jackson, who grew up in the Dallas area, led Loyola with 16 points, and Custer had 10. Schofield scored 14 for Tennessee.

Loyola-Chicago: A special run continues and the Ramblers might not be one-year wonders. Several key players will be back, including Custer, fellow junior guard Marques Townes and freshman center Cameron Krutwig. The Ramblers probably won’t have to wait another 33 years this time.

Tennessee: Letting a quick lead get away will hurt for the Vols, although the rally is a boost for a starting lineup with no seniors. It was the first NCAA trip in three seasons at Tennessee for Barnes, who took the Longhorns 16 times in 17 years.

Loyola-Chicago is headed to the round of 16 for the first time since 1985, when it lost to Patrick Ewing and Georgetown. That was also the last time the Ramblers made the NCAA Tournament. 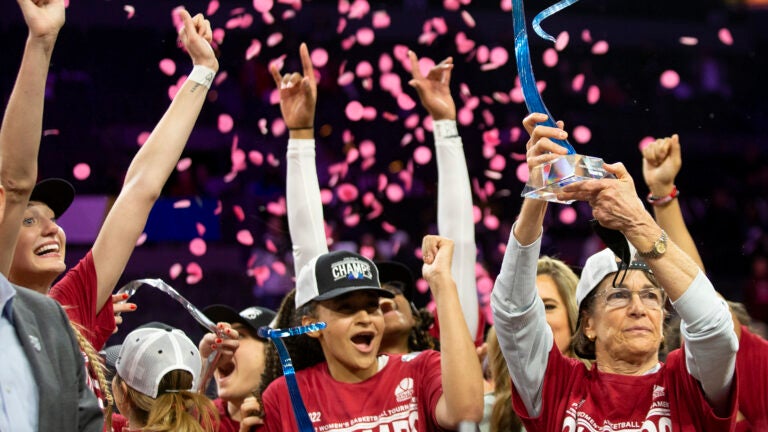 A look at what could happen in the women's NCAA Tournament