The Patriots didn’t win the Super Bowl. They didn’t win Day 1 of free agency, either.

If you’re thinking what I’m thinking, there’s only one thing left to do: Operation Overthrow.

No, that’s a Steve Grogan reference. It’s the plan. Right — the plan.

Meet me in the parking lot of the Red Wing Diner on Route 1. You bring the tar, I’ll supply the feathers.

It’s happening, and it’s overdue. We’re storming the Gillette castle. It’s time to depose this Belichick clown once and for all, before the Patriots, you know, actually have a losing season or something.

Sure, in an era in which the rules are stacked against consistency, let alone a dynasty, the Patriots have won three Super Bowls, could own at least two more Lombardi Trophies with a little luck and better health, have made the AFC title game three straight seasons, including during a 2013 season in which their transcendent tight end blew out his knee, their other, exceptionally versatile tight end decided it better to be a non-fictional Tony Montana than play with the modern-day Joe Montana, and multiplayer nucleus of the run defense ended up on injured reserve.

A dozen regular-season and a trip to the final four is all well and good, but let me ask you this: How many Free-Agency Winner banners hang in Gillette Stadium? That’s right, none. None. Well, unless you were really excited about Danny Amendola last year. But that doesn’t count. It was only worth a plaque.

And just look at these no-names and never-weres they’re lining up for visits: Shelley Smith? He’s less famous than the ESPN reporter. Brandon LaFell? Pretty sure that last name is French for “can’t stay upright.” Someone named Shaughnessy? OK, Belichick’s flat trolling us now.

So who’s with me? Tar. Feathers. A hoodie in tatters. Revenge.

All right, so maybe that’s a little over the top. We can hold the feathers, I guess. But in a day in which I heard one sports radio caller (Hey, I Have To Listenï¿½) say flat-out that Belichick is the worst general manager in football, even the stupidest theories and plans of attack seem somewhat feasible.

I understand why Patriots fans are frustrated today. Aqib Talib, an amusing and talented player whose arrival in 2013 changed the defense almost instantly, got an offer he couldn’t refuse from the team that ended the Patriots season. Because he is not completely insane, he did not refuse it.

Forget that six years and $57 million — with $26 million guaranteed — is an absurd overpay for a player who had so much baggage he cost the Patriots just a fourth-round pick in the November 2012 deal with the Bucks. Talib will be missed. He was a damn good cornerback, fun to watch, gets too much grief for his postseason injuries (football players get hurt playing football at random times — go figure), and he’s joining a rival. Bummer.

But hey, at least it means the Broncos probably won’t be signing Darrelle Revis too, unless they’ve figured out another way to cheat the salary cap. Wait — does John Elway even know there’s a salary cap? It’s not like the Broncos abided by one when he was playing.

Envying teams that make a big move in free agency is understandable. And it’s aggravating as hell when one of your team’s best players joins the team that stood in the way of a sixth trip to the Super Bowl in the Tom Brady era. The notion that the Patriots should be loading up to get Brady that fourth ring is comes from the right place, even if it’s undisciplined in the long term. If there’s any solace to be taken in watching the Broncos do just that for Manning, it’s the knowledge that sometime in January, he’ll make sure they’re best-laid plans implode spectacularly.

Maybe that comes before the Broncos and Patriots inevitably collide, maybe it comes after. But drawing conclusions on where the Patriots are, where they are headed, and whether they’re roster-building strategy is sound is absolutely ignorant at this point in the process, roughly six months before they play their next game.

Losing Talib is disappointing, but there’s no way he’s worth that price. I suspect Alterraun Verner is raising an eyebrow in his agent’s direction today, and I still think he would have been a great fit here.

As useful consolation prizes, I wouldn’t mind the best available Cromartie — Antonio (tall, troubled at times, and freakishly talented), Dominique Rodgers-, even Warren here. There are good corners available, some of whom we would have preferred to Talib less than two years ago.

As for the Darrelle Revis sweepstakes, well, the mewling we’ve-got-to-get-him-or-else spoiled minority aren’t particularly interested in context or perspective today. As cool as it would be to see him join the Patriots, it would rate as one of the great upsets in sports history if he takes an offer that isn’t the most lucrative.

In the frustration of having not won a Super Bowl in the past nine years with Brady and Belichick at the helm of the operation, two things are lost.

1) It’s damn hard to win a Super Bowl. Don’t you remember that? You need more than talent and quality coaching — you need breaks, and they ones they got in 2001, ’03, and ’04 haven’t come their way in the biggest moments recently. Guess what? That’s sports.

2) We have it so good with this team. In those nine years, they made two Super Bowls, five AFC title games, and won eight division titles. They’ve won more than any team of this era, and this era is not over even if they — gasp — didn’t dazzle on Day 1 of free agency. I’m pretty sure they’ll add some football players. Good ones, too. Maybe we’ll even have heard of a few.

The Patriots’ approach isn’t splashy. On days like yesterday, it’s not much fun. But man, it’s almost always rewarding on those fall Sundays that matter. Try to enjoy it, will ya? 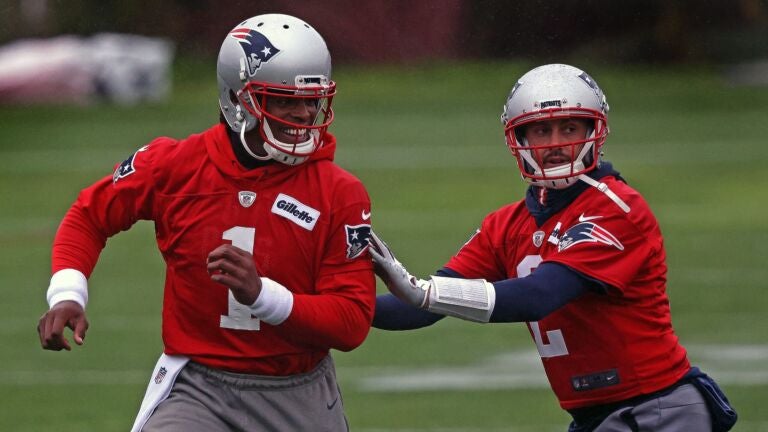