Amanda Swinhart for the Boston Globe

It’s July 27, 2012, the first day of Patriots training camp, and Aaron Hernandez is all giggles with a media throng lapping up all the yuks about the former New England tight end’s summer vacation. Rob Gronkowski had just finished off a wild offseason during which Hernandez’s fellow tight end worked off his team’s Super Bowl loss to the New York Giants with what seemed like a five-month-long party, with the omnipresent paparazzi at every turn, and most every Boston media member taking pleasure in the ability to cover the cartoonish events.

“Aaron, was your summer as crazy as Gronk’s?

“Um, more private,” Hernandez said to the delight of the crowd surrounding him. “But I still had some fun.”

Like what? Can you give us some examples of the fun you had?

Eleven days earlier, Daniel Abreu and Safiro Furtado were the victims of a drive-by shooting in Boston’s South End, murders for which Hernandez was indicted by a grand jury on charges related to them on Wednesday.
Eleven days.
Exactly one month later, the Patriots would sign Hernandez to a new five-year deal. He’d play one season under it.
The big news at the dawn of that training camp was that Hernandez had spent time fielding punts. It certainly wasn’t his involvement in the grisly situation that would only be a precursor for what was to occur 11 months later, when Hernandez and his bumbling Connecticut cronies allegedly took Odin Lloyd and put a bullet in his head in some nondescript North Attleboro industrial park.
Why would anyone suspect it, especially within the embedded Patriots media corps, where the sun doesn’t rise in the East, but over the cupcake and candy stores at Patriot Place? Hernandez and Gronkowski were on the cusp of another dominant season for the Patriots; Gronk had just received his extension the previous month, and murder was the furthest thing from anyone’s mind, unless it was hoping Tom Brady could kill the Ravens’ dreams for a second straight season.
But there’s just something inherently creepy about hearing Hernandez play footsie with the media about his offseason adventures knowing what we know now — if these allegations are proven to be true. The accused murderer has the assembled crowd eating out of his dirty hand, guffawing over the most menial answers while he has his secret buried deep within. It was a forgettable exchange in the present. Looking back, almost two years later now, it’s just plain gross.
Did you have a particular favorite moment from the summer of Gronk?
“I just chill, I don’t pay attention to most of that stuff. I’m sure he was having fun, and I definitely get laughs when people tell me about some stuff, but I’m more laid-back, chill, and just relaxing.”
Wonder how difficult it was to include “homicidal?”
What did you think of his ESPN naked cover?
“I didn’t take that great of a look at it,” he said. Laughs all around. “It is what it is.”
Hernandez was then asked about pictures that surfaced of Tom Brady cliff-diving during the offseason and whether or not such activities should be frowned upon.
“You know what I’m saying, this is a regular job, we like to have fun, too,” Hernandez said. “I’ve been zip-lining and stuff like that, too. They can’t really tell you what you can and what you can’t do, but you just have to be careful about what you do. If you’re out there and being reckless and doing some crazy stuff, then that’s your own stupidity.”
That’s some good preaching by Hernandez. Eleven days later.
You can’t fault the media for anything more than simply being sycophants in the Foxborough tractor beam. After all, Hernandez’s behavior that summer was so well-orchestrated that he eventually bamboozled his way in a new deal with the Patriots, who we can assume were just fine with the crowd Hernandez hung out with. Until, you know, they weren’t. A year later.
That’s three deaths now officially attributed to Hernandez, who was potential trouble since Day One, even if we were led to believe it was only some silly marijuana that led him to fall in the draft. Hernandez’s rap sheet exploded like a piñata in the wake of the Lloyd accusations. The Patriots didn’t do any of that homework?
Maybe that research was just private like Hernandez’s summer, which turned out to be quite the eventful offseason after all. Nobody is laughing anymore. 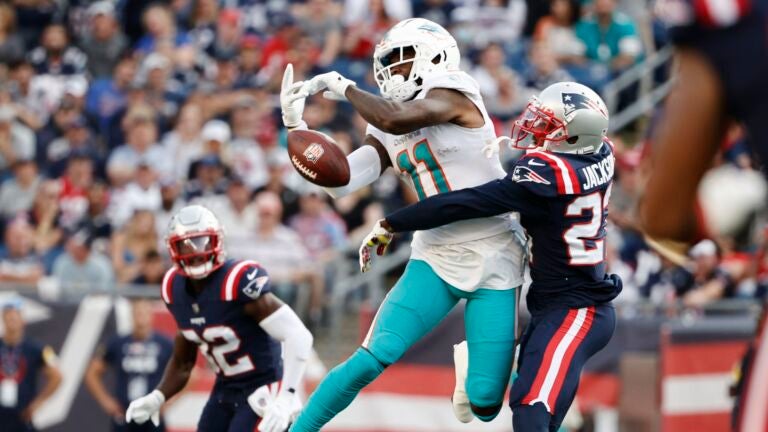