Welcome to Season 3, Episode 11 of the Unconventional Preview, a serious-but-lighthearted, nostalgia-tinted look at the Patriots’ weekly matchup that runs right here every Friday afternoon. The 8-2 Patriots have won six straight after Sunday night’s 42-20 thumping of Andrew Luck and the Colts. (Anyone check to see if Sergio Brown has peeled himself off the turf yet? Pretty sure they just left him there to tweet nonsense from his back.) But the 7-3 Lions are no easy matchup, with a potent offense and a much-improved defense in Jim Caldwell’s first season as head coach. Kick it off, Gostkowski, and let’s get this thing started already …

Golden Tate: I seem to recall that I was not alone in hoping the Patriots would take Tate in the 2010 NFL Draft. And I suspect, though I don’t recall this specifically, that when the Patriots passed on the Notre Dame receiver with their first pick in the second round to take a certain University of Arizona tight end coming off a back injury, I was skeptical. I guess Gronk has worked out OK, though. I suppose it was regrettable selecting Jermaine Cunningham seven picks before the Seahawks snagged Tate at No. 60 overall. It took him awhile to come into his own, but he’s been a perfect fit in his first season with the Lions, having already set career highs in receptions (68) and yards (950). I suspect Bill Belichick will pay him a high compliment Sunday — he’ll assign Darrelle Revis to accompany Tate all over the field.

Devin McCourty: Theory: You can tell how much a Patriots fan is really paying attention by what they think of McCourty. Those who think he’s decent but hardly essential? They get their talking-points from sports radio. Those who see him as a rangy, intelligent safety who tackles well and covers like a corner? Congratulations for recognizing the subtle excellence of arguably the most valuable safety in the NFL. I suspect he’ll be essential in dealing with Calvin Johnson Sunday. And I know there will be some among us still reluctant to give him his due.

Rob Gronkowski: Because no matter the opponent or the circumstances, Gronk, who at 25 is already the best all-around tight end in NFL history, is the most entertaining reason to watch the Patriots every single week. And that’s the truth.

DOES MATTHEW STAFFORD REMIND YOU OF ANYONE? HINT: HE’S TALL. HAS A STRONG ARM …

Yeah, I suppose the Drew Bledsoe comp isn’t new. But it is apt. Stafford has a cannon for a right arm, and his belief that his fastball will always find the target occasionally gets him in trouble, especially when his mechanics and footwork devolve or he locks in on the first read.

He truly is a lot like Bledsoe, but with Brett Favre’s worst gunslinger tendencies. Or, among contemporaries, he’s Tony Romo with a stronger arm and a healthy back. That’s hardly an insult, though it also an acknowledgment of his flaws.

Though this is just Stafford’s sixth season, I figured he’d be higher on the all-time passing yardage list than his current standing of No. 101. Over the next few Sundays, he’ll close in on or surpass on such sub-luminaries as Aaron Brooks, Trent Dilfer, Richard Todd, Jim Zorn, Gus Frerotte and Neil O’Donnell.

With 20,136 career passing yards, Stafford is not yet halfway to the 44,611, good for 10th all-time, accumulated by Bledsoe in his 14 seasons. But it’s a similar pace by a similar player.

I’ve mentioned before that when and if Belichick retires from coaching, he absolutely must write his memoirs. An candid and insightful look back on his own career would probably be the most fascinating football book ever published. I think he’ll do it, too.

But I want to amend that now. He shouldn’t write a book. He should write multiple volumes. There’s too much good stuff for just one book — hell, the early Patriots years would make for a fascinating book alone, let alone everything else that has come after.

I’d want to know about everything that came before he was here, too. I mean, Belichick has been coaching in the NFL since 1975, when I was 5 years old. That’s not a career; it’s a lifetime. He did so much even before his name and reputation were built with Bill Parcells, Lawrence Taylor, and those unforgettable ’80s Giants teams.

I was reminded of this — not that one was really necessary — when Belichick made reference recently to coaching star tight ends Charlie Sanders and David Hill while he was in Detroit. Rob Gronkowski and Aaron Hernandez were a great tight end tandem. But they weren’t the first pair of exceptional players coached simultaneously by Belichick at that position. And it’s always cool to get those reminders.

We tend to think the way the Patriots do things is original or unique. But Belichick’s roots all over the league are deep, and he has so much experience to draw from. I hope he tells us all of it someday, book by book.

It’s a rule, you know. So here it is: the obligatory Barry Sanders highlight reel, worked in, somewhere.

1) He was better than Emmitt Smith. He was. If only they each could have swapped teams for a season of their respective primes for evidence.

2) I wonder whether Harlon Barnett ever untangled his legs from that double-cut Sanders put on him at the 1 minute 18 second mark.

PREDICTION, OR LET’S MAKE SURE BRADY GETS RID OF THE BALL BEFORE NDAMUKONG SUH CAN CHEAP-SHOT HIM

Detroit has an aggressive and versatile pass-rush, led by Suh, a player whom I suspect might be one Belichick considers paying big money someday. It may be a Sunday for the Patriots, so adept right now at utilizing the depth of the roster to expose the opponent’s weaknesses, to go to the short passing game, particularly if Julian Edelman is healthy. Detroit is tough, but Stafford can be counted on for a bewildering mistake or two. No one is stopping this New England offense right now. The train keeps rolling. 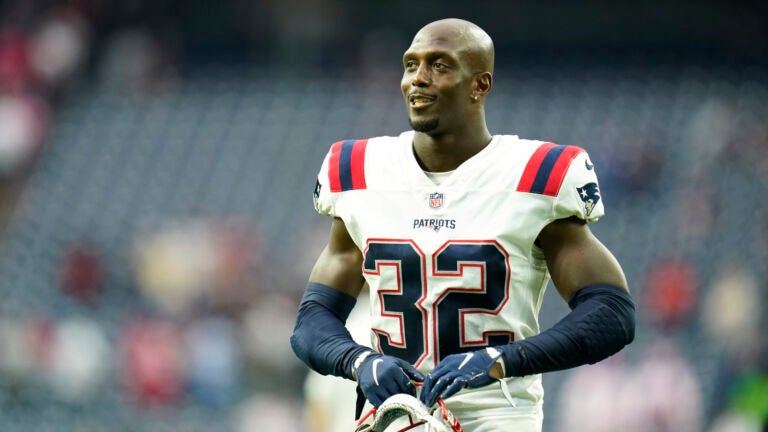 'We strive to be like Bill Russell': Devin McCourty shared his thoughts on the Celtics' legend