It wasn’t supposed to be this way.

Just weeks earlier, the Boston Militia – the most successful franchise in the history of the Women’s Football Alliance – had celebrated its league title at the White House. Now, seven-year owner Ernie Boch, Jr., billionaire Boston-area car dealer, was telling a handful of veterans he would soon pull funding.

On January 5, Boch Jr. announced the reigning champs would be no more.

It wasn’t supposed to be this way.

Twenty-four hours later, it wouldn’t be. 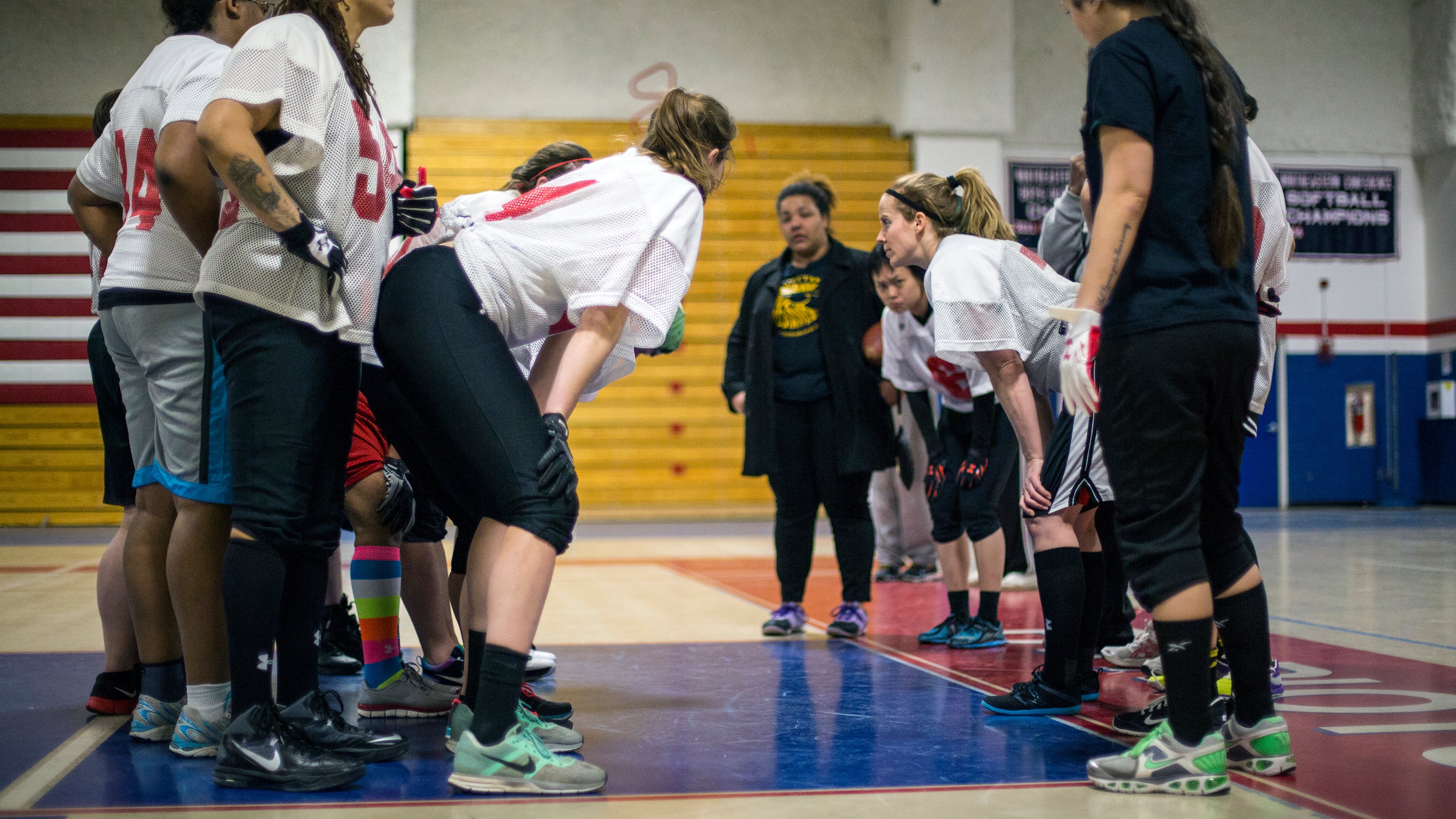 No member of the Boston Militia took a traditional path to women’s tackle football, because there isn’t one.

Molly Goodwin was 35 years old when she played her first down. Like many kids, she’d grown up in youth sports. Soccer stuck, and she continued playing through college at UC Berkeley; there, she picked up Ultimate Frisbee. When she hung up the disc after 15 years, she joined a flag football league in Jamaica Plain. It was her teammates there who introduced her to the Massachusetts Mutiny, one of two local teams that would soon unite to form the Militia.

Goodwin retired in 2013 after nine seasons at middle linebacker, but has remained close with the team. She was visiting family in Chicago in early January when she got a frantic phone call from one former teammate, Vicky Eddy, just after Boch’s announcement.

In moments, Goodwin’s shock became the seed of a plan. She called fellow alumni Mia Brickhouse and Erin Baumgartner. Together, they vowed to resurrect the team.

“It wasn’t, ‘Crap, this is over,’’’ Brickhouse said. “It was, ‘Oh, crap, what do we do to win another championship?’ And that has always been the mentality.’’

Boston women’s football would have to survive on pocket change, donations and sweat. It wouldn’t be the first time.

Before the Militia, Boston had two rival teams: the Mutiny and the Boston Rampage. They had owners, but were largely self-run and supported. 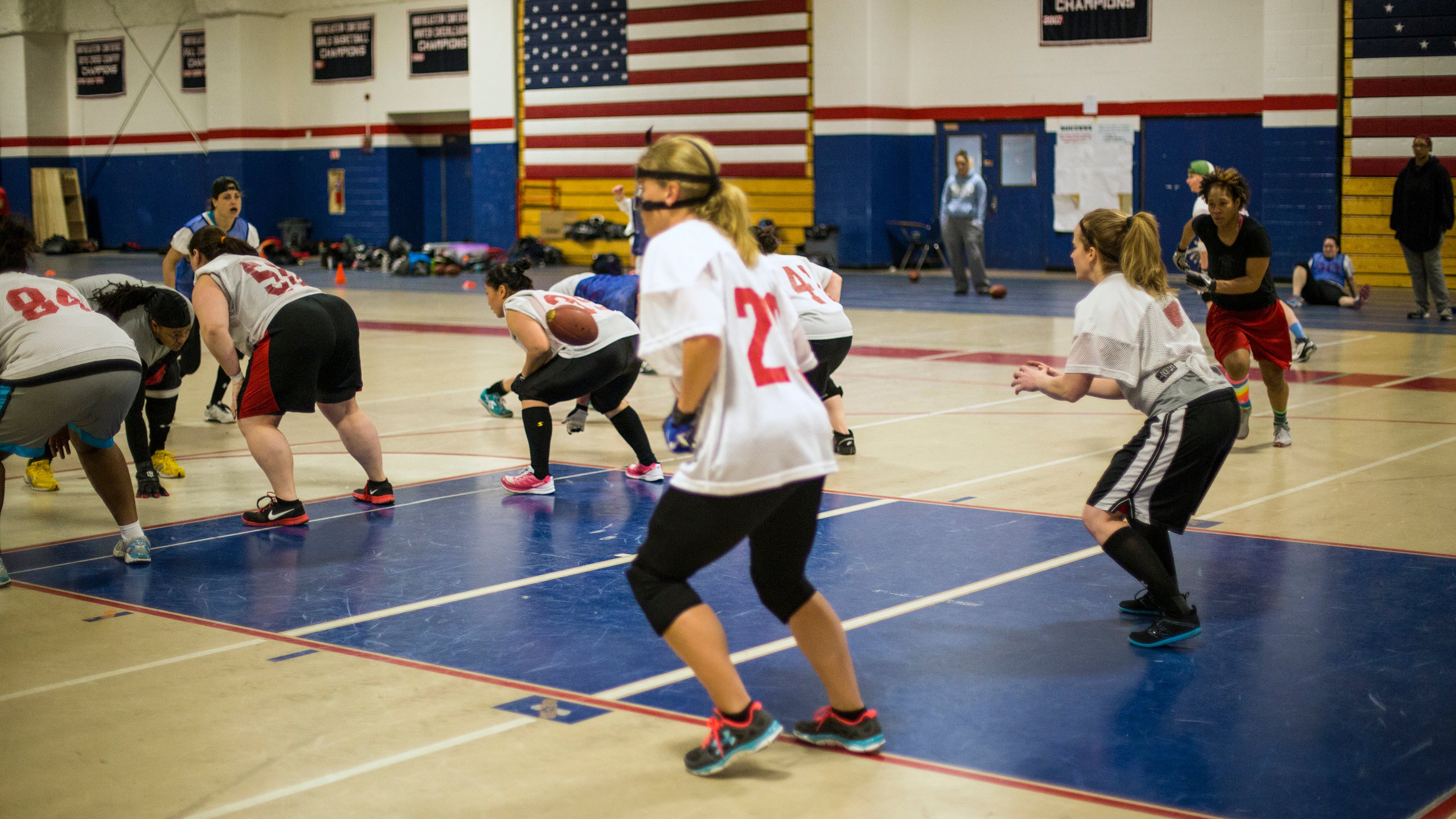 When one team’s owner left and the other’s folded the team in 2007, Boch bought both and merged them. He brought with him cash reserves neither parent team had ever sniffed, and the Militia began a string of success that rivals any in American sports over the period.

In seven seasons split between the Independent Women’s Football League and the WFA, the Militia went 67-6. It won its first title at the IWFL Championship in 2010. The following season, the team took the crown in its first year in the WFA. The Militia was a perfect 11-0 in 2014 on its way to once again topping the field of more than three dozen teams.

Last season, the team’s shortest trip – a visit to Washington, D.C. to face the DC Divas – clocked in at more than 430 miles; they also logged trips to Cleveland and Pittsburgh.

In his announcement, Boch said, “The limited numbers of teams in the Northeast has resulted in a reduced schedule over the last few years, causing the professional level of competition to decline.’’

Boch was more candid in a recent phone interview.

‘Teams didn’t want to travel three, four, five hours and get their asses kicked by 50 points,’’ Boch said. “They wouldn’t come up and play us, and that diminishes the play.’’

When Boch moved the team from the IWFL to the WFA in 2011, it came with the understanding between himself and the league that it would do everything it could to improve competition, he said. One possibility championed by Boch: merging the leagues. Those talks proved fruitless, and Boch made the decision to bow out on top.

Despite the suddenness of his announcement, the players don’t begrudge Boch’s leaving. Instead, they’re universally thankful for his support. But they miss his money.

So far, finding cash has been the biggest hurdle for the executive staff of the newly-christened Boston Renegades, who surrendered the Militia name when Boch left. 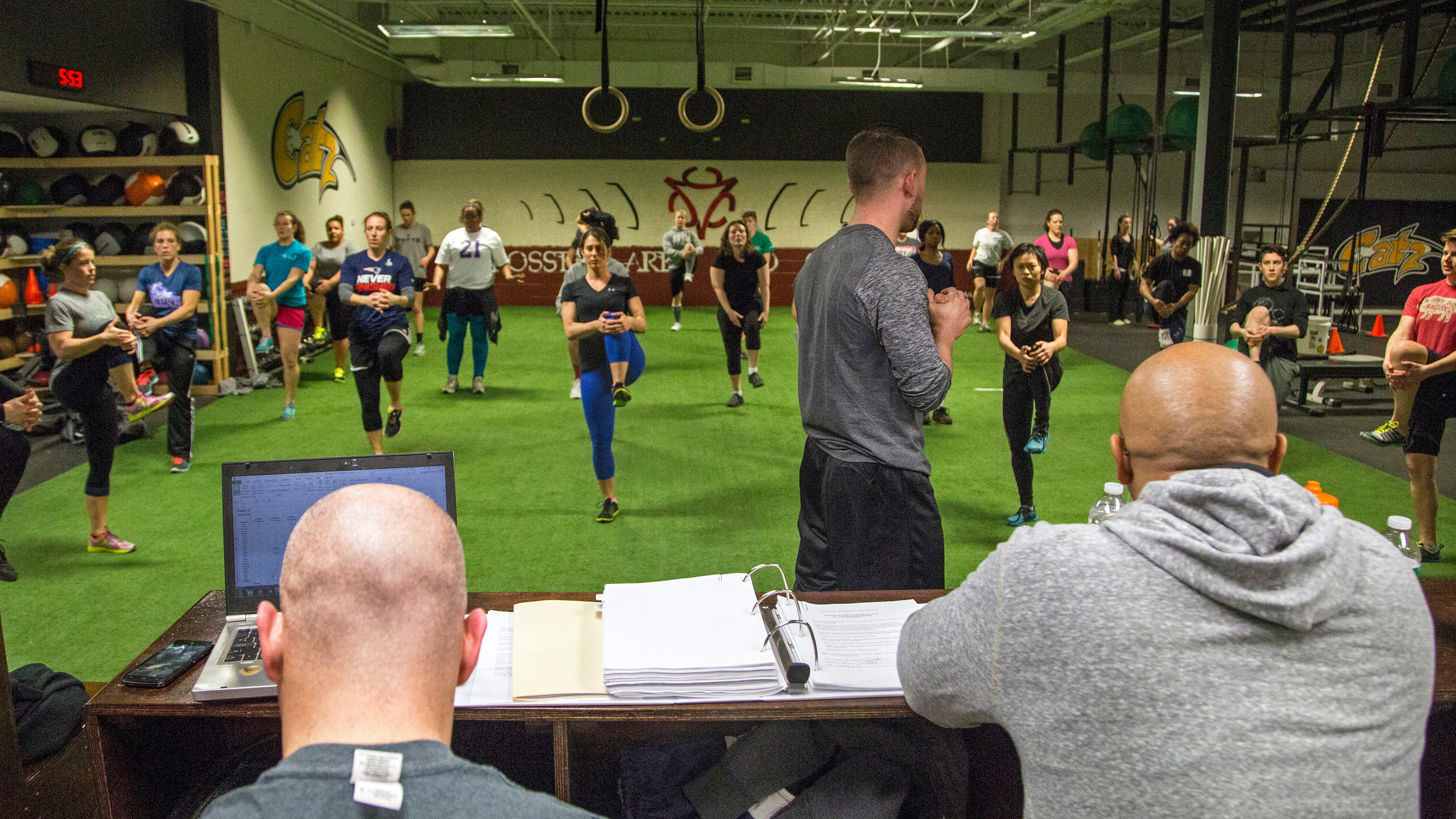 Pads, helmets, balls, uniforms, field time and other odds and ends add up. For away games, 45 players and 15-odd staff cram into buses for hours-long trips, only to cram on top of each other again in hotel rooms; they economize, but trip costs still reach five figures.

Each player chips in $500 in dues, and the team can count on modest revenue from merchandise sales at its home games, but those don’t come close to covering expenses. While Boch wouldn’t say how much he spent each season, Goodwin estimates a full 8-game season plus a handful of playoff games costs about $150,000, with this year’s abbreviated five-game schedule falling somewhere south of that. The team’s YouCaring fundraising page has brought in over $13,000, but that’s just a fraction of what they’ll need for the regular season, let alone the playoffs.

Most of the coaching, training and medical staff have returned, this year offering their time pro bono. Since mid-January, The team has practiced nights at Catz Sports Performance Center in Wilmington, which has opened its doors and extended its hours for nothing more than gratitude.

The Renegades aren’t unique in being self-funded; rather, they were unique in having such deep pockets for so many years, according to superfan and supporter Nikki Rivera. The Renegades have the deep roster of a sponsored team and lost that designation mere days before the start of preseason. Ensuring the same ends that met with far deeper cash reserves continue to meet has been a scramble.

“We’re literally begging and knocking on doors trying to get people to support us,’’ Brickhouse said.

But the Renegades have managed. They’ve reached an agreement with Somerville to remain at Dilboy Stadium, holding their first outdoor practice there on March 17. They’ve scheduled six regular season games, just two of them at home – a concession to their distance from competition.

The Renegades as they are today will survive this season, but if they’re to continue into the next, Goodwin says they’ll need a sponsor.

“I think we’re getting a bump right now because people feel sorry for our situation,’’ Goodwin said. “They’re not going to feel sorry for us come next January if we don’t do the work to get the right foundation in place.’’

That foundation includes designing a logo and assembling marketing materials that will convince a corporate sponsor to align with the Renegades brand. The most important step is ensuring the on-field product is every bit as good this year as last.

As chief marketing officer, Baumgartner is tasked with pursuing sponsorship. Brickhouse handles the logistics and Goodwin makes the numbers work, and a handful of current players pitch in where they can. 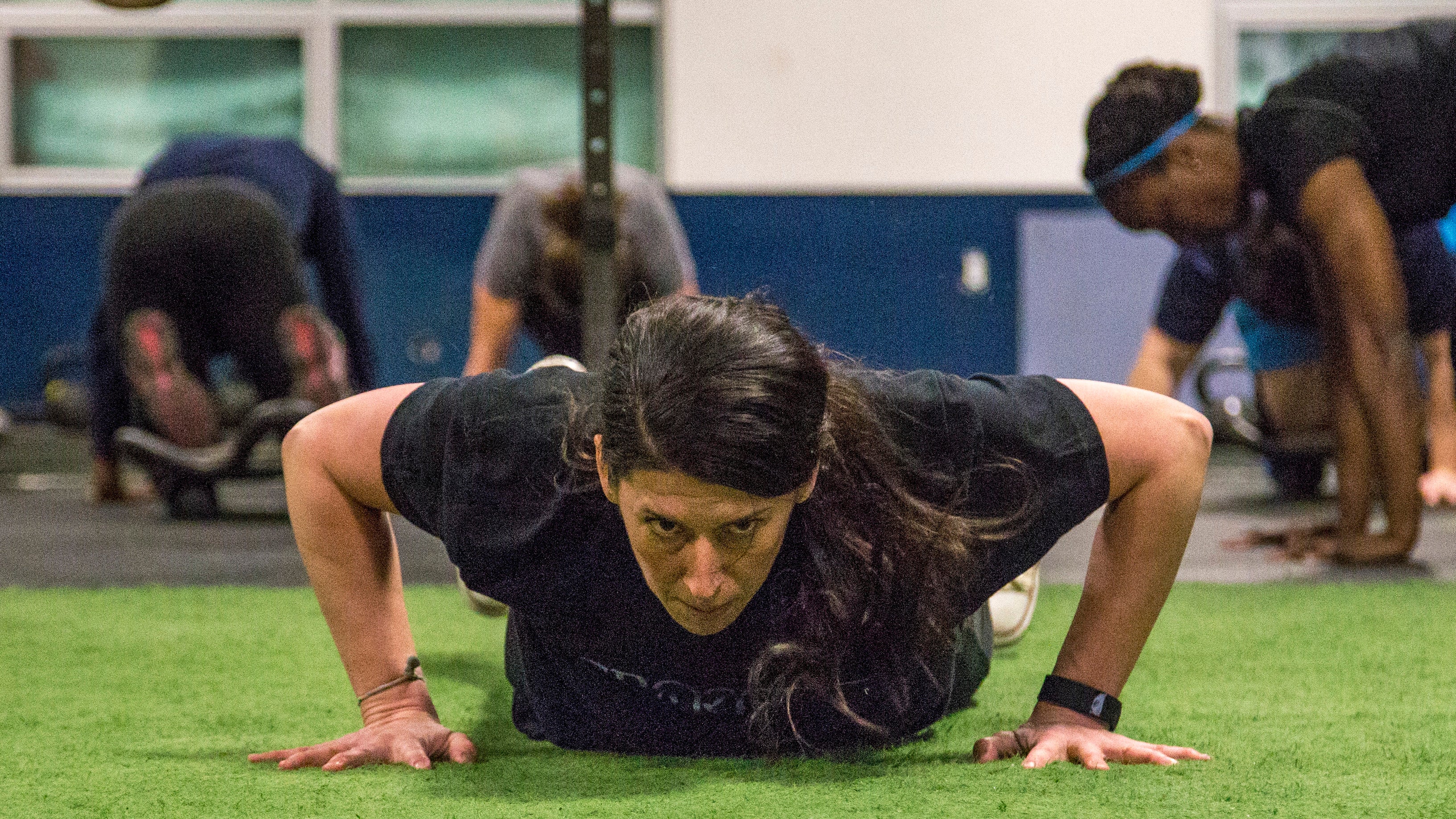 In the immediate aftermath of Boch’s announcement, the trio would wake early for a daily conference call: Goodwin in Chicago, Brickhouse at her home in San Francisco, and Baumgartner in Boston. Months in, they’re still putting in late nights and early mornings, and preparing for the season is no easier on the 40-odd women swapping their work clothes for sweat-stained pads.

That kind of woman is one like Goodwin, who in the spare moments from her financial planning business leads country-spanning conference calls. Or one like Villanova Law grad Brickhouse, who does operational logistics for a major athletic conference. Or quarterback Allison Cahill, a Princeton graduate and personal trainer, or running back Whitney Zelee, a business development analyst at an asset management company. Or herself, the assistant director of MIT’s SENSEable City Lab and ‘the smartest person’ Goodwin knows.

It’s not for everyone, but for the Renegades, women’s football is everything. The WFA is the largest of three full-contact, 11-on-11 football leagues for women in America, and powderpuff, it’s not: these girls hit. The Renegades’ brand of football is every bit as rough-and-tumble as the men’s game, the only difference being a slightly shrunken pigskin.

“It’s NFL rules, but the ball is a little bit smaller, because in theory, our hands are smaller,’’ Baumgartner said, showing off hands that could grip an NFL ball with ease.

Three years after she gave up the game to focus on her career, the former wide receiver and safety still has shoulders as broad as a swimmer’s. Tying her hair into a ponytail, she joins conditioning drills at Catz. She hasn’t re-joined the squad, but the ‘siren call’ has been tempting.

“I can’t say I’m being completely successful at ignoring it,’’ Baumgartner said, smirking.

Despite its three championships, Boston’s women’s football team is niche. The Militia drew about 500 fans for home games in the regular season and a few more in the playoffs. The idea of women’s football is still met largely with disbelief, but that’s something the Renegades are trying to change.

“Once they see the games, they see how hard we work, how hard we hit each other, I think it doesn’t take much to convince people,’’ Baumgartner said.

The Renegades’ fans are few but dedicated, none moreso than Rivera. The self-proclaimed “Militia Cheerleader’’ – now “Renegade Cheerleader’’ – has been hooked since the first game after the merger, when she came to support her college roommate.

In the seven years since, she’s missed two games – each for the birth of a son. Her boyfriend, Mark Simon, is nicknamed “Backseat Coach,’’ and her sons, ages three and two, are known as “Little Coach’’ and “Scout.’’

Where much of traditional American media tells Rivera’s boys, ‘Girls don’t play real football,’ they know better. When Tiny Coach watches Tom Brady on Sundays, he gives his mom a funny look and asks, ‘Where’s QB?’ in reference to Cahill.

“I’m never going to have to explain to them that women can be strong, because they’re watching the friggin’ O-line,’’ Rivera said. “Dude, they’re epic.’’ In a way, the alums say, Boch’s departure was a blessing. Before he came aboard, the team was largely run by the women and staff who made it up; under Boch, it was beholden to him and the Boch brand.

The team had a presence in the community with Boch, but again their own agents, the Renegades plan to step it up. They’ll start in Somerville, where the team will hold a few outreach events this season. The goals, Brickhouse said, are threefold: to gain fans, to encourage fitness and to let little girls know they, too, can play football.

“(General Manager Ben Brown and I) said, ‘that sucks, Ernie is not going to be owning the team anymore, but we have an opportunity, and let’s kick the door open,’’’ Brickhouse said.

The Renegades will enter the 2015 season as the sole member of the WFA’s New England region. They will play at home against the Central Maryland Seahawks and the DC Divas, and away at Cleveland, DC, Chicago and the IWFL’s Montreal Blitz.

In a little over a week, the team will begin its championship quest. It will be a title defense in the Renegades’ minds only: when they lost the Militia name, they lost the record. But those who played know what they accomplished.

“We’re starting over, clean slate,’’ Zelee said. “But for us, who have been through it, we know we’re champions. That doesn’t change.’’

The Boston Renegades open their 2015 season April 18 in Somerville against the Central Maryland Seahawks. 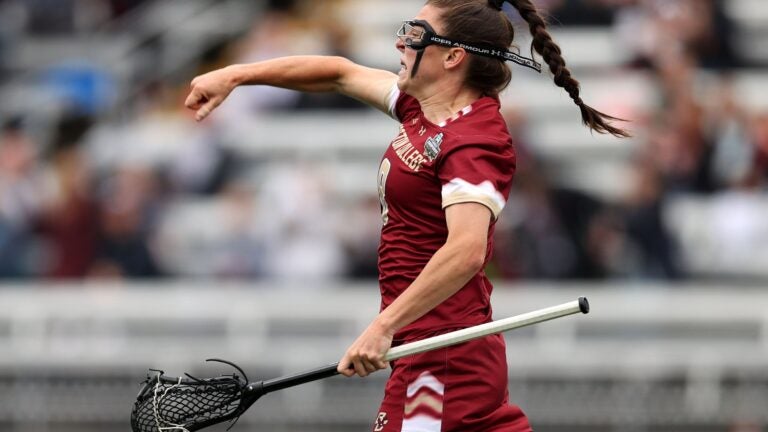