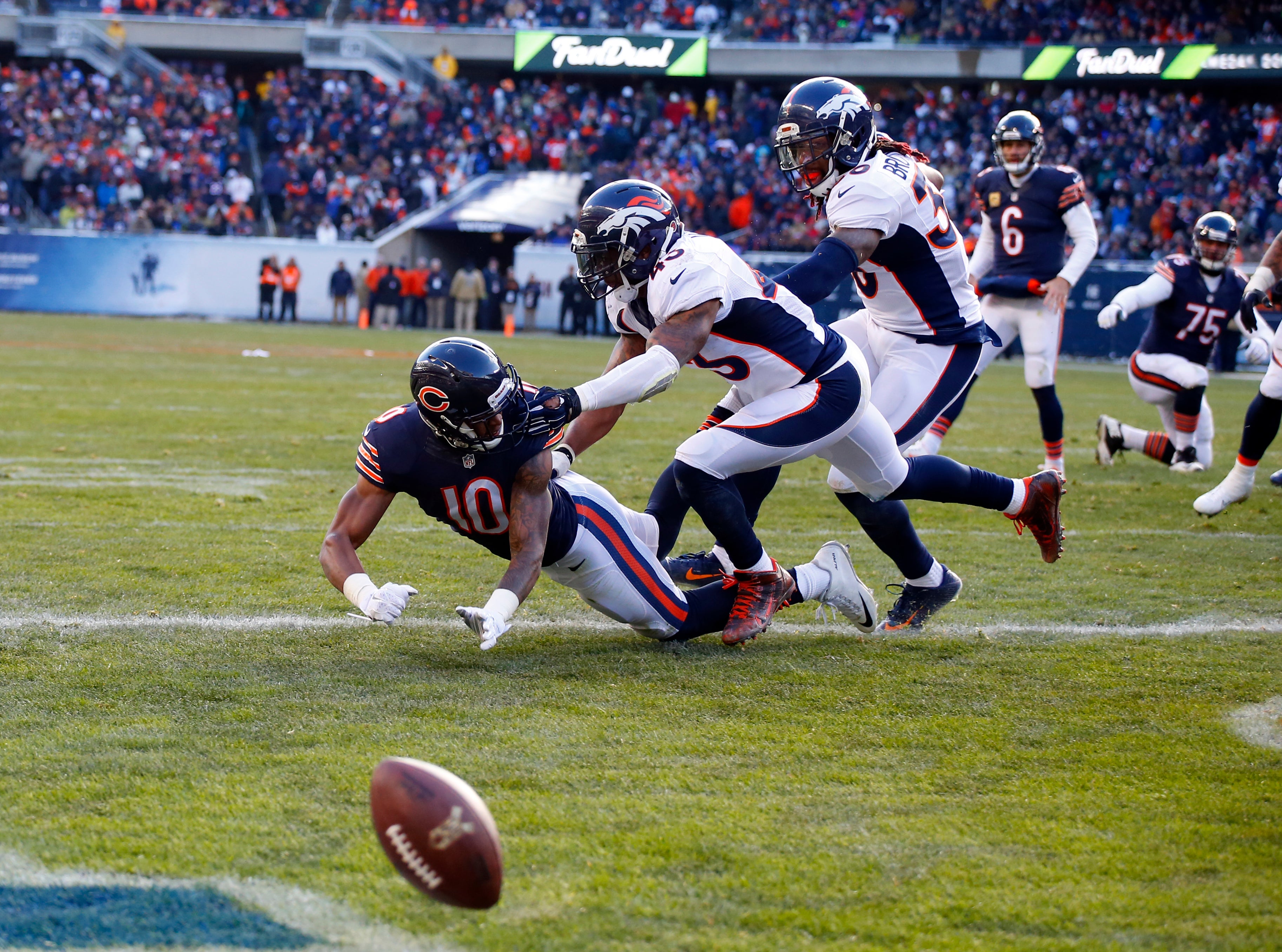 Then there were two, and perhaps only one by the time the weekend comes to a close.

In knocking off the Dallas Cowboys on Thanksgiving Day — and knocking out quarterback Tony Romo (again) in the process — the Carolina Panthers became the first NFL team to 11 wins this season, keeping their quest for the perfect season intact.

The Panthers can clinch a playoff spot if a variety of different scenarios unfold over the remainder of this weekend’s NFL schedule.

It’s a position that the New England Patriots also find themselves in ahead of Sunday night’s showdown in Denver against the Broncos. A win, coupled with a New York Jets loss to the Miami Dolphins, would clinch the AFC East and put the Patriots on a clear path to securing home-field advantage throughout the playoffs.

With the Patriots now down Dion Lewis, Julian Edelman, Nate Solder, Aaron Dobson, and perhaps Danny Amendola in the wake of an ugly win over the Buffalo Bills on Monday, life figures to be rough Sunday for Tom Brady against what many consider the best defense in the league, which has allowed only 284.3 yards per game, and a mere 190.6 passing yards.

Denver has allowed only 18.3 points per game this season.

That’s second in the NFL … to the No. 1 New England Patriots.

While the significance of injuries to the Patriots’ offense shouldn’t be discounted, attention should be paid to the New England defense that has quietly risen from point of concern to elite status. A defense that has been missing linebacker Jamie Collins, who hasn’t practiced since Week 8 due to a mystery illness, has found itself atop the NFL in stinginess with an average allowance of only 18.2 points per game. That figure is currently superior to last year’s Super Bowl-winning defense, which allowed 19.6 points per game with Brandon Browner and Darrelle Revis in the fold.

Still, New England has allowed 341.3 yards per game, only 14th-best, and 252.5 passing yards (21st), and they haven’t exactly faced a fantasy team dream roster of quarterbacks this season.

Then there’s this to consider in any debate over which defense should be considered superior: Of the 183 points that the Denver defense has allowed, 51 of them (Fifty-one) have come via backup Broncos quarterback Peyton Manning’s league-leading 17 interceptions. That’s nearly 28 percent attributed to Manning, less of a concern for Denver now that this is unofficially Brock Osweiler’s offense.

Forget the drama of what potentially might have been the final Brady-Manning battle, if Osweiler can secure the ball even marginally better than the injured Manning, Denver’s defense won’t find itself having to clean up the mess.

The Patriots’ defense has been better than most everyone expected. But it’s clearly not on the same level as the Broncos’ dominant unit.

In its second full week without Manning gumming up the works, it faces its biggest test, albeit against a banged-up New England squad.

Good thing the rematch will come in January at Gillette.

Our roundup of picks for Sunday’s Patriots-Broncos game:

ESPN.com: Seven out of 13 pick the Patriots.

Greg Cote, Miami Herald: Broncos 24, Patriots 23. “AAWWK!’’ carols the Upset Bird. “Denver Braaawwwk!’’ Well, I picked unbeaten Carolina to lose Thursday (how’d I do?) and now I have unbeaten New England falling here. “Dear 1972 Dolphins: You’re welcome!’’ I am aware that Tom Brady has owned the Broncos, winning five of past six meetings, including the playoffs, and with 17 TDs and only two INTs. Also aware that Bill Belichick has a habit of befuddling inexperienced QBs like Brock Osweiler, who’s subbing again for injured Peyton Manning. Sometimes you gotta go with the gut, though, and I do here in a ready-for-prime-time matchup. The Patriots’ many injuries will exact a toll. And the Broncos’ defense is really good. I’d also bet the “over’’ on sideline shots of Manning. “Too bad no Brady vs. Manning,’’ notes U-Bird. “But do not underestimate the power of Brock Osweiler. Braawwk Oswaaawwwk!’’

Pete Prisco, CBS Sports: Broncos 24, Patriots 21. “It will be Brock Osweiler time this week in Denver, and you know Bill Belichick will throw everything at him. This, though, is a game that will come down to the Denver defensive front against Tom Brady. His line had troubles against the Bills, and will here as well. I liked the Patriots initially in this game, but now it’s the Broncos with that front creating havoc.’’

Peter Schrager, FoxSports.com: Broncos 24, Patriots 20. “At some point, the Patriots’ injuries might catch up with them. If there’s a game I can see them dropping on the schedule, it’s this one. New England has been without Julian Edelman, Jamie Collins, Nate Solder and Dion Lewis. On Monday, both Aaron Dobson and Danny Amendola left the game with injuries. I can see New England blowing out the Broncos without Peyton Manning, yes, but I also would love to see how things play out if Denver keeps on winning without Manning in the lineup. Give me Brock and the Broncos.’’

FoxSports.com staff: Four out of seven go with Denver.

FiveThirtyEight.com: New England with a 59 percent chance of winning.

Elliot Harrison, NFL.com: Patriots 17, Broncos 13. “No Brady-Manning rivalry game? So be it. The only thing more tired than that storyline are those Extenze commercials with Jimmy Johnson. Actually, I enjoy those more. Sure, those quarterbacks have squared off in important games, but there is so much more to these teams than those players, especially the Broncos. The defense saved the day in Chicago and is allowing the second-fewest points per game (behind New England). Phillips’ group paces the league in yards per game, yards per play, sacks and a bunch of sub-categories that you would only appreciate if you regularly toiled at World of Warcraft with a soggy bowl of Cinnamon Life. New England has started nine different guys on the offensive line, while the ground attack averages less than four yards per carry. Newbie QBs are historically terrible versus Bill Belichick and Co.’’

USA Todaystaff: Patriots across the board.

Mike Florio, ProFootballTalk: Broncos 27, Patriots 23. “Gary Kubiak struggled against the Patriots during his time with the Texans, but he had the Patriots on the ropes in January as the offensive coordinator of the Ravens. Based on how well the Broncos played last time they hosted an unbeaten team on Sunday Night Football, and given how well Brock Osweiler fits the Kubiak offense, it could be time for New England’s run of perfection to end.’’

Michael David Smith, ProFootballTalk: Patriots 24, Broncos 14. “The Broncos made the right call by replacing Peyton Manning with Brock Osweiler, but neither quarterback would lead Denver to a win over New England.’’

Jimmy Kempski, Philly Voice: Patriots. “While the Patri*ts won’t be able to turn Brock Osweiler’s helmet radio to the Spanish station on key 3rd and long situations since they’re not at home, I’m sure Darth Hoodie has some other illegal way of messing with inexperienced quarterbacks on the road.’’

Michael Hurley, CBS Boston: Broncos. “I think it’ll be low-scoring, a battle of two of the league’s best defenses, but I think the Patriots come home with the first blemish on their record. They’ve flirted with an L for the past two weeks, and that has to catch up to them eventually.’’

Neil Greenberg, The Washington Post: Pick: Broncos (+3). (Patriots with 61.1 percent chance of winning.) “Only the Titans are better at getting to opposing quarterbacks on the pass rush than the Broncos, but Denver also boasts two shutdown corners in Aqib Talib (59.3 passer rating against) and Chris Harris Jr. (68.2 passer rating against). The Patriots should still win, but it will be close.’’

It says here: Patriots 17, Broncos 15. There’s plenty of reason to argue why the Broncos will knock off the Patriots for their first loss of the season. Which means decimated New England will probably, somehow, win.