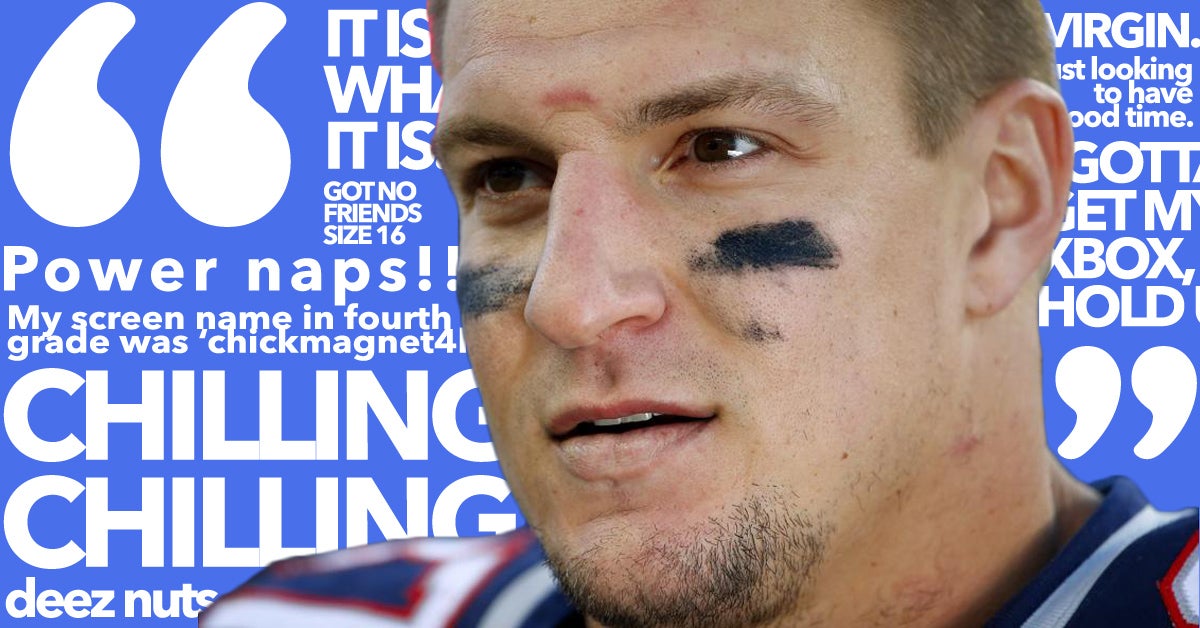 2. “No, I don’t know line dancing. Whenever they play the hip hop that’s when I do my moves.’’ — on Naples Fox 4 in February

5. “We’re probably going to go out after, do a little dancing, get a little crunk.’’ — on Bleacher Report’s “Uninterrupted’’ in May

7. On his party bus: “You can still be having fun, but maybe it’s in more of a setting where people don’t know what’s going on.’’ — in Sports Illustrated’s January 12 issue

9. On something a husband might find all over the bed that makes him suspect his wife is having an affair with the baker: “Whipped cream.’’ — on Celebrity Family Feud in July

13. “‘In front of the entire country, Gronk’s spikes impacts right between my butt cheeks.’’’ — reading from A Gronking to Remember on Super Bowl XLIX Media Day

14. “I would have the pleasure to spike a football between butt cheeks.’’ — on Jimmy Kimmel Live! in February

15. “Would you do me the honors of letting me spike this onto your butt?’’ — in a July Funny or Die video

16. “All of a sudden they went hard at us, and I got pushed or something, and I was like screw it. Last game of the year, I’m throwing some haymakers.’’ — on Jimmy Kimmel Live! in February

17. “Better watch out / I’m lookin’ for chicks as hot as crocodiles / but you got to wait a while’’ — in a freestyle rap caught on Instagram, June 29

19. “Dude, I got some Goose, you want some?’’ — overheard at the Super Bowl victory parade

23. “We’re killing this mountain, baby! This mountain got destroyed by us!’’ — a March 31 Facebook video

26. On Tom Brady’s pitch at the Sox opener: “I don’t know how he didn’t get it over the plate. He might have done that on purpose. I’m gonna ask him.’’ — to Fox Sport in April

27. “After 10 seconds of me dancing on top of her in the chair, the collective 520 pounds of the two of us collapsed the fold-up chair… That was the best $30 I ever made.’’ — written in It’s Good to Be Gronk, (Jeter Publishing, July)

29. On his biceps: “You know, these sure aren’t deflating. These are only inflating.’’ — on Bleacher Report’s “Uninterrupted’’ in May

30. “There’s only one thing you can deflate: deez nuts.’’ — on Bleacher Report’s “Uninterrupted’’ in May

31. “My drink is usually vodka with water because it gets you hydrated and drunk at the same time.’’ — in DuJour magazine’s June issue

32. On the word “eloquently’’: “I don’t even know what that word means.’’ — in DuJour magazine’s June issue

33. On being a “ladies man’’: “I mean, my screen name in fourth grade on AIM was ‘chickmagnet4life,’ so it started in fourth grade. And that’s ‘4 life.’’’ — in DuJour magazine’s June issue

35. “Heck, I still wear my favorite pair of jeans from high school.’’ — written in It’s Good to Be Gronk, (Jeter Publishing, July)

36. “The girl I had been friendly with told me that I looked like the Hulk throwing four dudes off me. She loved it and definitely made it up to me later.’’ — written in It’s Good to Be Gronk, (Jeter Publishing, July)

39. More on Slip’N Slide: “Well, we got really dirty because our floor was really dirty.’’ — on SiriusXM radio in July

40. Even more on Slip’N Slide: “You ever do one outside where you flip the cup? It’s called Flip the Cup. Slip and Cup? No, Flip and Cup. Slip and Flip.’’ — on SiriusXM radio in July

42. “You think you’re an up and coming superstar? You haven’t even stepped in the ring yet with this monster! You’ve never faced someone with the arms of this size with the guns that scare even children that can’t even…see properly!’’ — in a BodyArmor “Gronkasaurus’’ video released in August

45. On wearing socks on live TV: “I was just getting changed and they pulled me out here, and I was like,’ Yeah, I’ll go on set with them, let’s go.’’’ — on the NFL Network in October

47. On his Halo Halloween costume: “Thanks, I made it myself with milk cartons, pipe cleaners, and $60,000.’’ — on The Late Show with Stephen Colbert in October

48. On a Dolphins player posting a Photoshopped image of himself crushing Tom Brady’s head: “I think that’d be a penalty if he does that.’’ — to CSNNE.com in October

52. “When you block someone and put them on their back, that’s called a pancake. Those are the best pancakes. Because I get hungry during games.’’ — in Dunkin’ Donuts’s “Dunksgiving’’ video in November