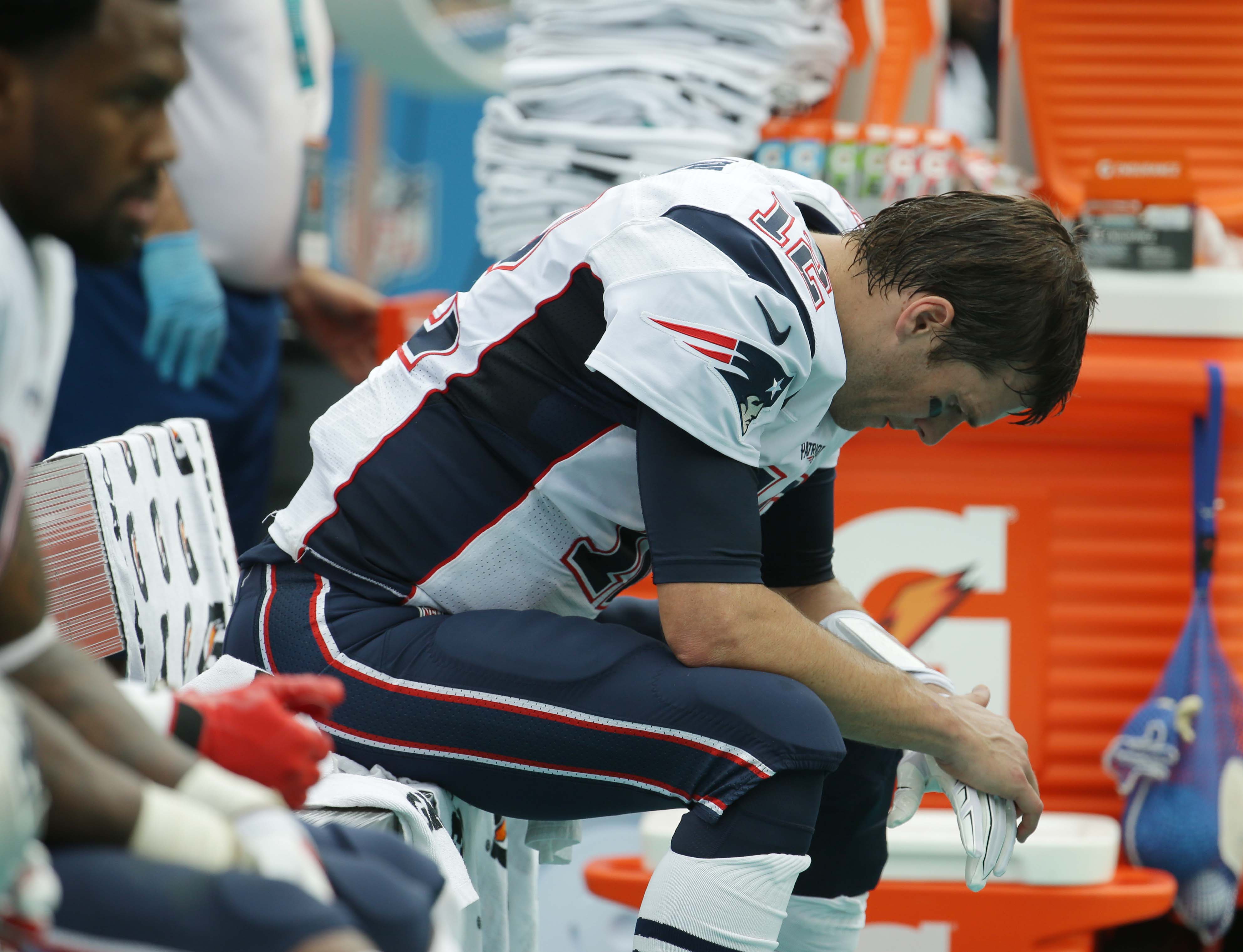 New England Patriots quarterback Tom Brady sits in the sidelines during the game against the Miami Dolphins.

I knew it hadn’t been the Patriots’ day even before venturing on to Twitter at precisely 8:11 p.m. and noticing, with a groan, that the top two trending topics in Boston were “Peyton Manning’’ and “Phil Simms.’’ That was all the confirmation necessary to know that Manning had done something of note on the football field for the first time in a while and the shameless, systematic, pent-up media fawning over the greatest regular-season quarterback in league history had been joyously ramped up in earnest.

Manning, caught up in a hazy HGH scandal that has left most of the media’s chief Deflategate conjecture specialists covering their ears and yelling “I can’t hear you! I can’t hear you!,’’ came off the bench and helped the Broncos pluck the top-seed in the AFC playoffs out of the Patriots’ grasp. It’s probably the closest thing Manning will have to redemption for the remainder of his career: a 27-20 win over a now-4-12 Chargers team that came largely due to a Favreian interception by opposing quarterback Philip Rivers and the deft running of teammate C.J. Anderson.

Manning’s relief effort of ineffective Brock Osweiler was a compelling moment, even if the reality of it — that this wasn’t the return to greatness, but a final fleeting glimpse of it — escaped Simms and Jim Nantz (who was Masters-level giddy) in the closing minutes of the CBS broadcast. Let him have it, because unless NFL Commissioner Roger Goodell suddenly bans quarterbacks who throw more than 20 miles per hour from participating in the playoffs, this was Manning’s last hurrah. He has nine career one-and-done playoff visits. Ten seems well within his reach, especially if it is the potent Steelers who visit Denver in two weeks.

Still, there are two reasons why Manning matters — why he was trending — in New England. First, because his Broncos seized the top spot in the AFC from a shockingly indifferent Patriots team that lost to the Dolphins, 20-10, Sunday. The Patriots, who perennially peak after Thanksgiving, have lost four of their last six after a 10-0 start. Who knew tryptophan had such lingering effects? While we trust that they’ll have their act together in two weeks when they face the Bengals, Texans or Chiefs, it is jarring to see them play so inefficiently. We all agree now that undefeated talk midway through a season is a waste of valuable oxygen, yes?

But this is about more than the games. It’s shameful and not at all surprising that Manning is getting the benefit of the doubt that Brady — the Dastardly and Notorious Cell Phone Smasher! — never did. Manning, his strings deftly pulled by his stage dad, Archie, has long been charmingly and calculatedly accommodating to all the right media people. (Manning’s middle name is Williams. It wouldn’t have been a surprise to learn it was Mortensen.) At this point, we expect him to receive favored-son treatment, but that doesn’t make the Peyton pandering any easier to accept. Oh, well. It will all be over soon.

That’s not the case for the Patriots’ title defense, mind you. Despite their recent run of uninspiring play and accumulated losses, they should be fine. Getting the top seed wasn’t imperative; getting the bye was, and that’s been secured for a couple weeks. The Patriots are battered to the point that deep reiteration of what they’ve endured isn’t required. The request is simple: they need Sebastian Vollmer, Julian Edelman, Dont’a Hightower, Danny Amendola and Devin McCourty — all of whom have missed meaningful time with injuries — to be as healthy as possible for the divisional round.

It does not seem to be too much to ask. Amendola and McCourty played Sunday but were part of a bewildering and discombobulated approach to the game by head coach Bill Belichick. The Patriots kept it beyond basic on offense in the first half, as if offensive coordinator Josh McDaniels had covertly allowed Ernie Zampese to come back and run the offense for the day. The Patriots ran the ball on 16 of the first 18 plays, in part, I suppose, to try to figure out what Steven Jackson can do. (Answer so far: Get you two yards at a time, maybe three.) Brady threw just five passes, completing four for 20 yards before the break. Three times on third-down plays with at least eight yards to, the Patriots ran.

This was not the team we know, and so we figured the strange look had to be by design. They kept it so basic in the first half that one conclusion seemed obvious: If they won, great, but they weren’t going to pretend like it was so high stakes to the point of risking further injuries. Further conclusion: They either don’t sweat going to Denver, or don’t expect Denver to be still playing come Conference Championship weekend. I’m betting the latter.

The let’s-just-get-through-this indifference of the first-half made the second half seem that much more bizarre. Suddenly, Brady started throwing. But he wasn’t throwing the quick timing routes that are unstoppable when Edelman is jittering around. Instead, he threw more than a few low-percentage alley-oops downfield. It was exasperating — every time he’d unleash the throw, the CBS camera would move to track the ball right when Brady was about to get demolished by one of the Dolphins’ no-account cheap-shot artists on their defensive line. You had to hold your breath and wait to see whether he got up.

You’d think the Patriots would have cut their losses and gone to backup quarterback Jimmy Garoppolo once Dolphins defensive tackle Ndamukong Suh, one of the league’s dirtiest players, rolled up Brady’s right ankle in the first half. Hell, Garoppolo probably should have started. But Brady was left out there to take more punishment in the second half of a game that they only seemed to care about once they were halfway done playing it. I’m still stumped as to why they took such an approach. They appeared to be playing to avoid injuries, yet put Brady at risk for half the game.

When Brady hobbled away from the podium after his postgame press conference, holding on to the wall for support before disappearing behind a door, you were grateful for the bye at any seeding and further baffled as to why the Patriots subjected him to so much vicious risk. Fortunately, like so many of the Patriots’ battered stalwarts who are being counted on to return in good form, he has two weeks to shake it off. To have Brady get seriously hurt on a day Peyton Manning returned? Now that would have been too much NFL injustice to take.