A shirtless Chandler Jones got down on his knees behind the Foxborough police station Sunday morning and appeared to be “actively praying or worshipping’’ as officers approached him, according to newly released police documents.

The documents shed some light on what happened with the Patriots defensive end after a Foxborough police officer deleted portions of the official police log about the encounter, which may have violated public records law. Police have called the incident a “medical emergency.’’

In a memo to Chief Edward T. O’Leary, Officer David J. Foscaldo reported that a large black man wearing sweatpants and no shirt ambled into the parking lot at 7:40 a.m.

“In a very hurried and haphazard-like fashion, I saw this man randomly scurry through a portion of the parking lot where our police cars are parked,’’ Foscaldo wrote. “This man suddenly made a ‘b-line’ for our police station’s rear door.’’

Suddenly, Foscaldo wrote, the man got down on his knees, laced his hands behind his head and held the position.

“It was like this man was trying to surrender (he was literally ‘as stiff as a board’/he was both upright and rigid),’’ the officer wrote.

Then Jones slowly got onto the ground, and it appeared as if he was “actively praying or worshipping,’’ Foscaldo said. Jones repeated this movement at least twice.

Foscaldo and another officer ran toward Jones, who by this time was lying on the ground, his arms spread by his side. He watched the officers approach him.

Parts of the report are redacted, including what happened after Foscaldo and another officer grabbed Jones’ arms. Several lines are blacked out after Jones told the officers who he was and that he had “been told’’ to come to the police station. 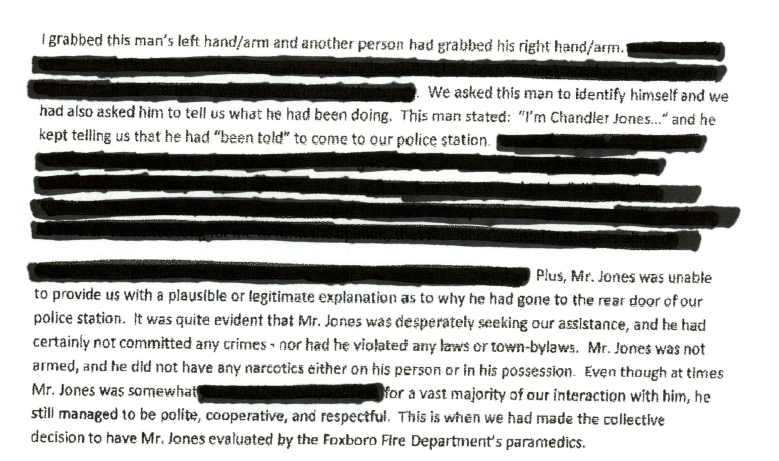 Jones couldn’t give a “plausible or legitimate explanation’’ about why he went to the station’s rear door. Foscaldo wrote. Jones didn’t have any drugs on him and was cooperative and respectful, the officer said.

“It was quite evident that Mr. Jones was desperately seeking our assistance, and he had certainly not committed any crimes,’’ Foscaldo wrote.

Jones was evaluated by paramedics, Chief O’Leary wrote in his memo. While at the ambulance, Jones said he left his keys at home, and another officer went to Jones’ residence.

When the officer got there, he found the door open and saw the keys on the kitchen counter. The officer smelled burnt marijuana, the chief wrote.

Jones was taken to Norwood Hospital, and was released the same day. He was at Patriots practice Monday morning.

Marsha Armando, the executive assistant of Town Manager William G Keegan, Jr., said in an email that all redactions “relate to medical condition observations/information that is exempt from public release by HIPAA and the Privacy Exemption of the Public Records statute.’’

Armando called any “allegation’’ of a violation of the public records statute “completely unfounded.’’

“There was one correction made to the log by deleting one word, which, upon review, was determined to constitute a medical diagnosis which police officers had no qualification to make and, thus, was deemed inappropriate,’’ she wrote. “That word was replaced by a more generic descriptive term for the evaluation undertaken by Town responders.’’