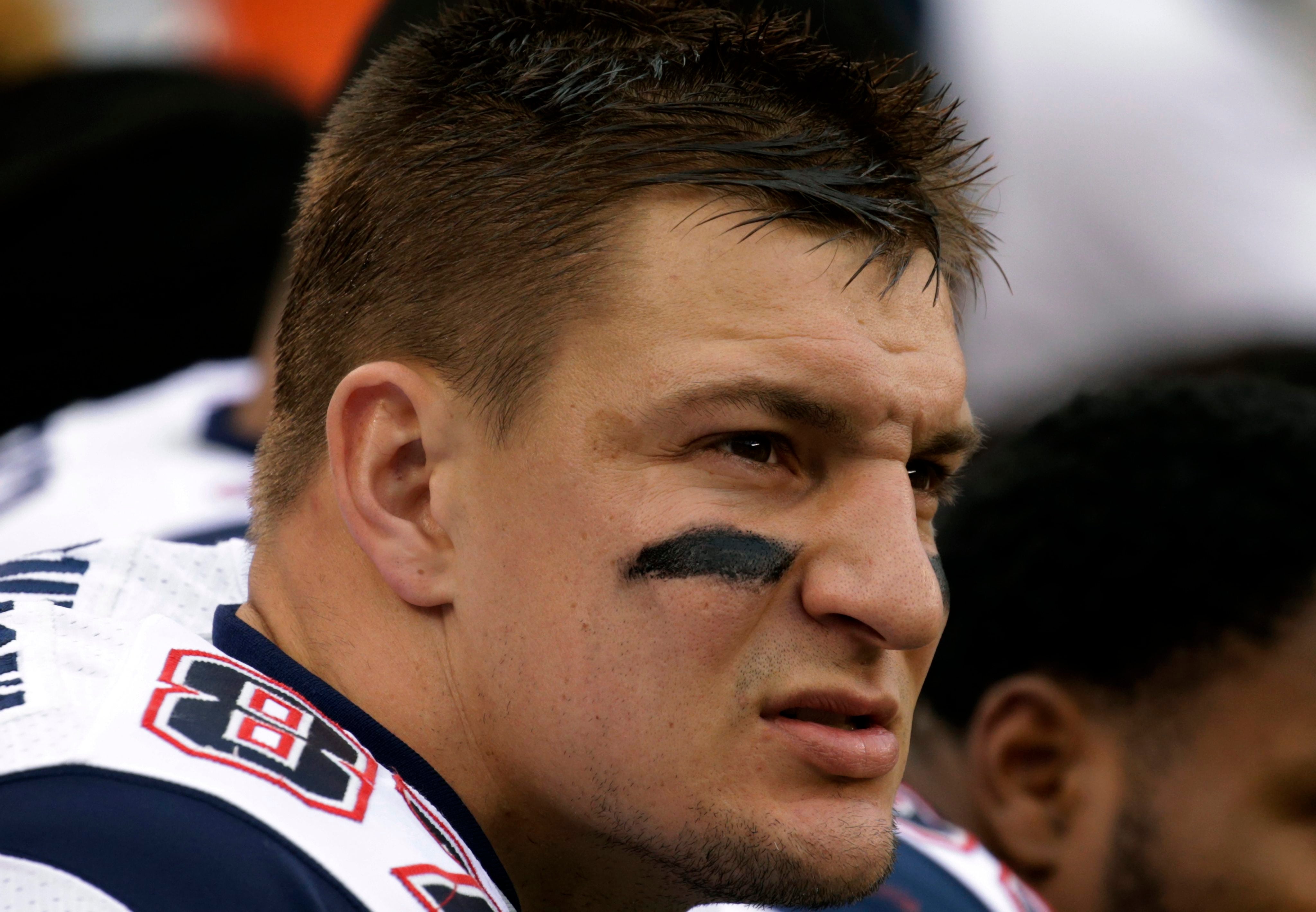 What the hell is going on with the New England Patriots?

Come the conclusion of Saturday’s Chiefs-Patriots divisional playoff game at Gillette Stadium, we’re either going to chalk this bizarre week in Foxborough up to much ado about nothing, or the blatant warning signs that something was amiss with the defending Super Bowl champions.

Presumably, the instances don’t build to a common thread, but all the same, something doesn’t add up.

Never mind the Belichick and Jones mysteries, it’s the Gronkowski injuries that have most people baffled as we whittle away the moments until Saturday afternoon’s kickoff.

Gronkowski missed practice on Tuesday, a procedure he repeated on Thursday, when reports surfaced that the Patriots tight end had received an injection for pain in the right knee that he injured in Denver back in late November. The injury was listed on Thursday’s injury report, something the Patriots updated later in the day by adding a back injury to the list of Gronkowski concerns.

The health of Tom Brady’s most pivotal weapon was of some concern heading into the week, particularly since the last time we saw Gronkowski, in the season-finale at Miami, he looked slow and not involved in much of the game plan. But to be fair, there wasn’t really much of a game plan to begin with.

But rewind to last weekend, when the Patriots were on their wild card bye, and that’s when photos emerged of Gronkowski on a JetBlue flight. Smirking poolside in Florida. Everything seemed fine.

Unless Gronkowski is feeling the physical effects of what looks like it was a grueling weekend in Fort Myers, he either suffered these injuries between his return and now, or there’s a bit of a ruse going on in regards to just how ready to go he happens to be. Logical reasoning would tell you that if his prized tight end is in any way injured, Belichick isn’t letting him get on a flight to Florida.

Our roundup of picks for Sunday’s Chiefs-Patriots divisional playoff game:

ESPN.com: Eight out of 12 pick the Patriots.

Greg Cote, Miami Herald: Patriots 24, Chiefs 17. “This is the only Divisional Round matchup in which the teams did not play during the regular season and are meeting for the first time in the playoffs. Kansas City last week pocketed its first playoff victory in 22 years and enters this game surfing an 11-game winning streak. Further, the matchup of Chiefs sackmen vs. a tattered Patriots offensive line favors the visitors and could throw chaos into Tom Brady’s pocket. And yet! (You knew this was coming). I just trust Bill Belichick and Brady, who have coached and quarterbacked the most postseason wins in NFL history, that’s all. I also note that defending-champion New England gets Julian Edelman back from injury (that’s big), that the Pats are 17-4 at home in the playoffs, and that KC has lost five straight trips to Foxborough. Yes, the Pats are 2-4 since a 10-0 start. But this is New England’s time of season. You’ve had a nice run, Chiefs. It ends here.’’

Pete Prisco, CBS Sports: Patriots 27, Chiefs 20. “The Chiefs have ripped off 11 straight victories and clearly are a hot team. They looked dominant against the Texans. But beating the champs at their place is a different animal. The Patriots will be rested and they needed it. They looked terrible against Miami in the finale and didn’t look great for most of December. They should get back some players they need, guys like Julian Edelman, which will help. The key, though, will be how well they block the Kansas City front, but Brady does a great job of getting the ball out. This is a big game for Chiefs quarterback Alex Smith. He will have to come up big against a good New England defense that will focus on taking away the run. I don’t think he does it here. Patriots are moving on.’’

Peter Schrager, Foxsports.com: Patriots 27, Chiefs 16. “The past six months I’ve heard it time and time again from members of the NFL press corps — “The Patriots are banged up’’ … “They’re too injured …’’ Well, as the Patriots head into Saturday afternoon’s clash with the Chiefs, I look at the two rosters, and it appears the latter might actually be the more injured team. Jeremy Maclin’s gruesome ankle injury makes him a game time decision for Saturday, Justin Houston didn’t look right against the Texans, and Tamba Hali is battling a nagging thumb injury. Kansas City’s won 11 straight games and looked dominant against the Houston Texans last week. The Patriots aren’t the Houston Texans. You won’t see Jamie Collins taking any direct snaps on Sunday.’’

Foxsports.com staff: Five out of seven pick the Patriots.

FiveThirtyEight: Patriots with a 51 percent chance of winning.

SB Nation staff: Five out of eight pick the Pats.

Mike Florio, Pro Football Talk: Patriots 27, Chiefs 23. “The Chiefs sparked last year’s run of excellence by the Patriots with a 41-14 prime-time blowout. This year, the Chiefs get the first postseason crack at ending New England’s quest for a fifth championship, while riding a Pats-style double-digit winning streak. This one could go either way, especially if Tom Brady can’t get rid of the ball quickly. Which makes receiver Julian Edelman critical; he needs to be able to play, and he needs to be able to get open quickly. If he does, the Patriots should be able to earn another berth in the AFC title game.’’

Michael David Smith, Pro Football Talk: Patriots 28, Chiefs 20. “The Chiefs are as hot as any team in the NFL right now, riding an 11-game winning streak after an absolute destruction of the Texans. But here’s the thing about that Chiefs winning streak: They’ve beaten a bunch of bad quarterbacks along the way. The Chiefs’ streak started with Landry Jones and the Steelers, featured the day when Peyton Manning looked like he was about to die of old age on the field, and included wins over quarterbacking luminaries like Jimmy Clausen and Johnny Manziel. We haven’t seen the Chiefs tested against a good quarterback like they will be on Saturday against Tom Brady, and I think the result will be that Brady picks apart the Kansas City secondary, and the Patriots move on to the AFC Championship Game.’’

Benjamin Hoffman, New York Times: Patriots. “The game is likely to be decided by the health of New England’s top receivers, Julian Edelman and Rob Gronkowski, who are listed as questionable. They are expected to play, but if they are limited or forced to leave the game, Kansas City can pull off an upset. If they are reasonably healthy, the Patriots should advance.’’

Neil Greenberg, Washington Post: Patriots with a 64.2 percent chance of winning. Pick: Chiefs +5. “The Patriots win this one easily if they can get pressure on quarterback Alex Smith.

According to Football Outsiders, New England had the second best pass-rushing unit in the NFL (8.1 percent adjusted sack rate, sacks (plus intentional grounding penalties) per pass attempt adjusted for down, distance, and opponent). Smith’s passer rating drops from 108.7 to 61.7 under pressure. If not, the Chiefs have enough offensive firepower to not only keep it close, but win this one outright.’’

Joe Manniello, Newsday: Patriots 23, Chiefs 20. “Three teams have had winning streaks of at least 10 games this season. Two of them are playing in this game. It’s the red-hot Chiefs, winners of 11 straight, against the defending Super Bowl champion Patriots in what I think has the potential for a thriller. The Pats, who started 10-0, finished on a 2-4 slide, including a Week 17 loss at Miami that cost them home-field advantage. They still secured a first-round bye, which they definitely needed considering all their injuries. Julian Edelman, who hasn’t played since Week 10, should be back, and that’s good news for the Patriots. With him, they were 9-0. Without him, they were 3-4. Speaking of first-round byes, it kind of felt like the Chiefs had one, too. They never had to sweat in Houston last week after that opening kickoff return for a touchdown. The Chiefs have one of the game’s best pass rushes and should be able to get to Tom Brady. But with Edelman back, Brady can return to the short passing game that fueled New England’s hot start. I think this will be close in the fourth quarter, so I like the idea of taking the points with a live underdog, especially a Chiefs team that I think can make a legit run at a Super Bowl. In the end, though, I have to lean toward the Pats. Brady and Edelman make enough plays to eke out a win, but Alex Smith and the pesky Chiefs keep it inside the number.’’

Elliot Harrison, NFL.com: Patriots 26, Chiefs 20. “Call it a Stephen Gostkowski kinda game. That’s not a bad thing, as he is the top kicker in pro football. (Dan Bailey and Justin Tucker are hopping on Twitter right about…now!) These two teams present the best of both worlds regarding the bye/non-bye conundrum. Everyone suspects a team like the Patriots would want that darn off week. Agreed. Health is of primary concern for the entire receiving corps, particularly tight end Rob Gronkowski. Meanwhile, the hottest team in pro football doesn’t want to let the playoff meal get lukewarm. I’ve heard many players say that as nice as it is to get the time off, many of the ailments these guys are dealing with won’t fully heal without a month off. So, both the Pats and Chiefs are in the best situation for their situation.’’

Michael Hurley, CBS Boston: Chiefs. “Any time you pick against Bill Belichick, Tom Brady and the New England Patriots when they’re at home in the divisional round, you run the risk of getting embarrassed. Surely, there were some folks who might have liked Tim Tebow’s Broncos getting 13.5 points in 2011, or perhaps J.J. Watt’s Texans getting 9.5 in 2012, or Andrew Luck’s Colts getting seven in 2013. But the Patriots won those three games by a combined 69 points. Those folks were made to look like fools.’’

Globe staff: Three out of five pick the Pats.

It says here: Patriots 20, Chiefs 16. For all the hullabaloo about the Patriots’ problems on offense, the defense reminds everyone that this is its time to shine.