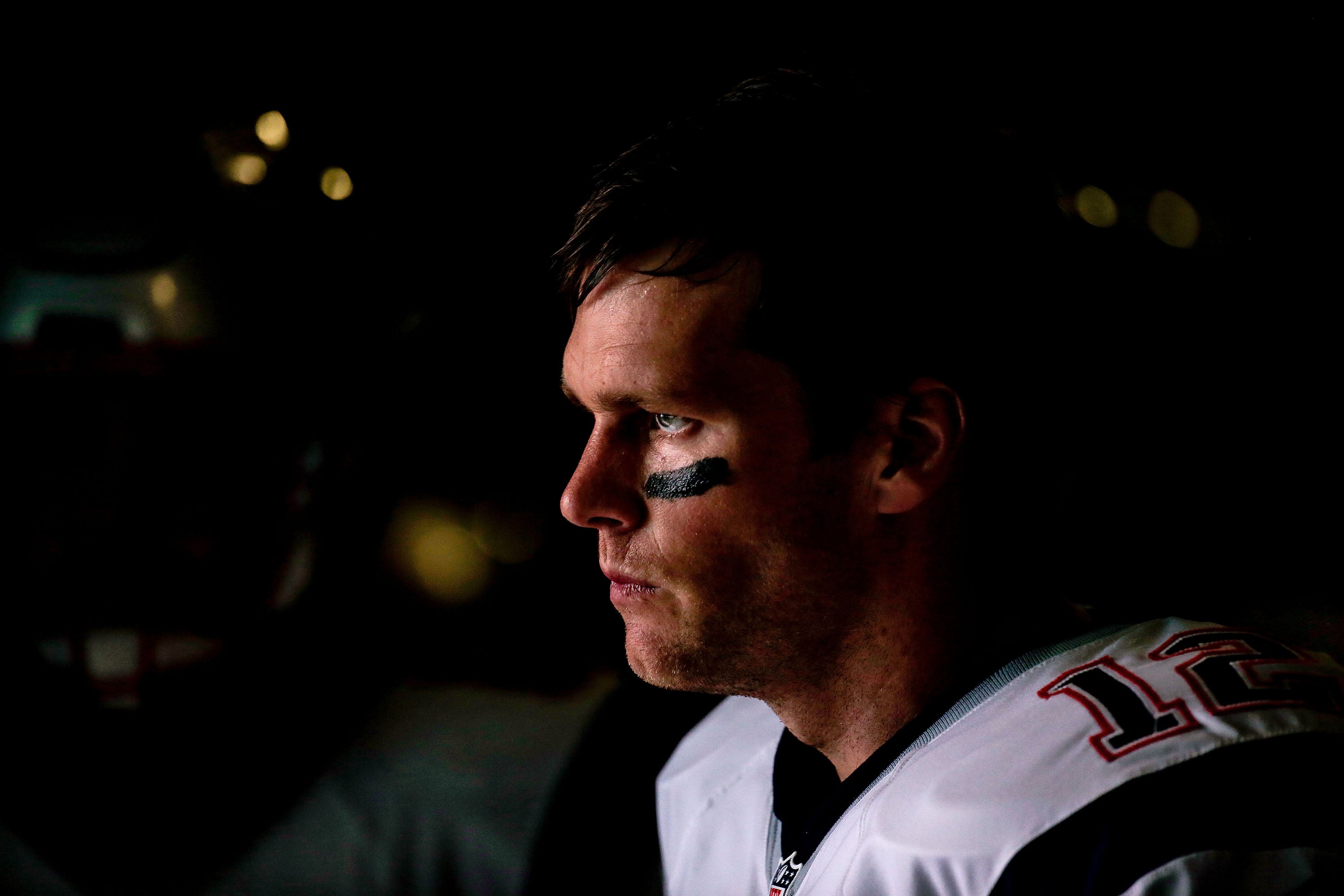 Tom Brady of the New England Patriots looks on before a game against the Miami Dolphins at Sun Life Stadium.

It’s unusual and probably even unprecedented for a sports franchise to require — or for its fan base to believe it requires — vengeance on the league whose commissioner has just presented it with a championship trophy.

Of course, not much has been business as usual over the past year for the Patriots, other than the continuance of their decade-and-a-half of on-field excellence. And so beat-’em-all-by-50 vengeance was precisely the wish in New England as this hell-bent-for-Santa Clara season began.

The itinerary of stops on the Patriots’ Vengeance Tour 2015 (And The Early Months of 2016, Also) is not finalized yet, but the journey is easily traced from its beginning to this hour. Deflategate became a thing almost a year ago to this date, in the early hours of Jan. 19, 2015 in the aftermath of the Patriots’ 45-7 AFC Championship Game victory over the Colts, two weeks before they won Super Bowl XLIX. It swelled into a massive, inescapable story over the summer, a scandal in which the truth was often obscured by bold-type, sensationalized headlines about smashed cell phones and pricey pool covers.

All of these months later, we still don’t know whether or not a felony against footballs — make that a misdemeanor, and that’s at its most damning — had even been committed. What we do know is that the punishment exceeded, by unfathomable levels, anything Patriots personnel may or may not have done to prepare those footballs to quarterback Tom Brady’s liking before that matchup with the Colts. NFL Commissioner Roger Goodell suspended Brady for four games in May, but the ban was overturned in federal court in September. The perception — a very just one — hovering over the start of the season was that the image-obsessed commish was attempting to over-punish Brady to appease team owners not named Robert Kraft.

That’s the messed-up recipe for how a championship defense also becomes a revenge tour. There’s not a Patriots fan worth his Tedy Bruschi jersey who didn’t daydream that Brady and his vengeful friends would rampage through the NFL, with the season culminating in a second straight Super Bowl victory, a fifth championship of the Brady/Bill Belichick era, and a public humiliation of Goodell as he forked over the Lombardi Trophy to a group of men who have every right to loathe his very existence.

For a substantial time, the Vengeance Tour — also known as Defending the Wall, in some circles — went according to the imagined blueprint. Through their first seven games, all victories, the Patriots averaged 35.6 points per game. Their average margin of victory was 16.6 points. We began chirping about an undefeated season — hey, why not avenge the 2007 season’s ending as well! — before the schedule had even been half-completed.

The Patriots won their next three games as well, but the tenor of the season began to change for a common reason in the NFL: injuries. The Patriots lost their dynamic revelation of a running back, Dion Lewis, to a knee injury in their eighth game, a win over the Redskins. Wide receiver Julian Edelman, for whom the descriptor “essential’’ is insufficient, broke his foot in the ninth game, a win against the Giants. He has not played since. After their 10th straight win, over the Bills, the Patriots finally lost, dropping an overtime thriller at Denver. They also lost tight end Rob Gronkowski to a knee injury, an injury that felt like a bullet dodged when he missed just a single game.

It was then that the Vengeance Tour shifted into something less … well, vengeful.

Credit for the shift also went to the teams the Patriots (or their fans) most wanted to destroy. The Ravens and Colts beat them to the punch by self-destructing. Both were devastated by those cruel twins, ineptitude and injury. We’d like to think karma got ‘em as well.

Another part of it was that the Patriots had to prioritize their own survival over vanquishing any real or imagined foes. They were the most-injured team in the league this season, and it had an effect: The Patriots lost four of their final six games, beginning with the Denver loss. It’s tough to exact vengeance when you’re down so many of your best avengers and your superheroes are suddenly guys named Keshawn Martin and Matter-Eater Lad. (Click the link. Click it.)

Beyond the midpoint of the schedule, and with talk of an unblemished record so obviously premature in hindsight, the goal of the regular season became getting as healthy as possible for the playoffs rather than dealing out retribution. It’s not so much about defending the wall anymore as it is about making sure the Patriots aren’t about to hit the damn thing.

No, a Survive And Advance Tour doesn’t have the same ring to it, and this matchup with the talented Chiefs is not an easy one, especially since Gronkowski — a most crucial avenger at this time of the year — is dealing with some vague but troubling injuries.

The rampage was fun while it lasted. But it’s also worth remembering that there are worse places to be than hosting a home game in the divisional round of the playoffs. Such as Baltimore or Indianapolis, if you’re going to demand the obvious examples.

What Patriots offseason workouts told us about Mac Jones's 2021 outlook