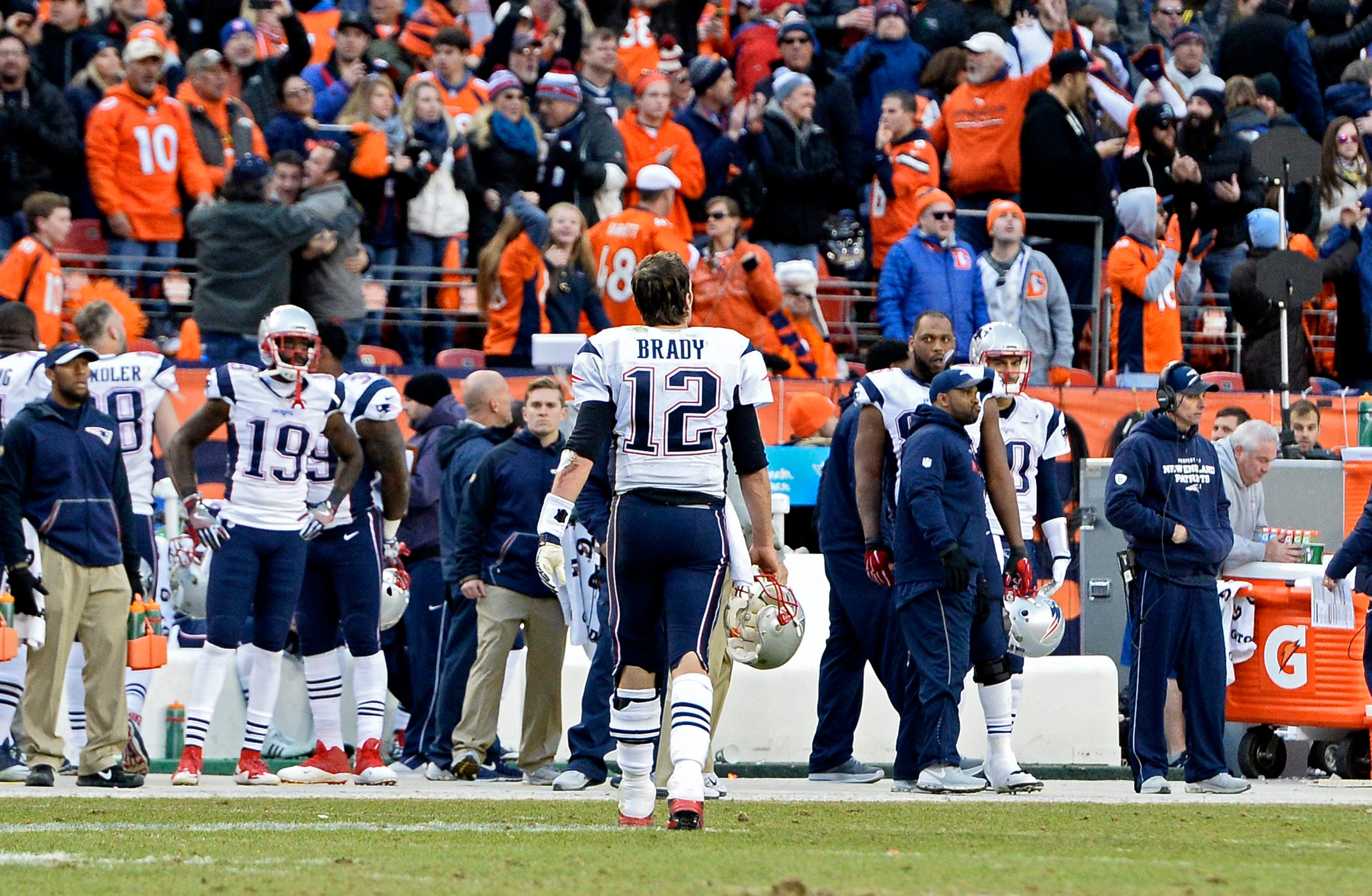 Tom Brady walks off the field after the Patriots’ loss to the Broncos.

By the time New England Patriots quarterback Tom Brady lined up for a two-point conversion attempt, a situation fraught with the desperation that had defined his whole Sunday afternoon in Denver, he’d already delivered enough head-scratching and heart-stopping plays to rank this AFC Championship loss among the worst playoff defeats in his career.

Brady, who probably would have had more time to throw with five life-size Weebles playing in front of him, was pressured all day by a suffocating Denver defense. Led by linebacker Von Miller, the Broncos’ defense was given the keys and not even told to lock up by used and abused Patriots tackle Marcus Cannon and his offensive line teammates. Brady was 27 of 56 passing in his team’s 20-18 loss to the Broncos, sending quarterback Peyton Manning and company to the Super Bowl for the second time in three years. Brady threw for 310 yards, one last-minute touchdown and a pair of interceptions before the two-point try.

The Patriots’ quarterback was jittery in the pocket. He had difficulty escaping pressure, finding open receivers, and — especially on his final offensive play of the game, the two-point conversion try — made uncharacteristically poor decisions.

Manning (17 of 32 passing, 176 yards, two touchdowns) wasn’t much better overall, but the Broncos seemed pleased to get as much from him as they did in the first half, when he threw a pair of pretty touchdown passes to tight end Owen Daniels. After those scores, Denver was content to allow its defense to shoulder the load the remainder of the way.

The Patriots won’t be going back to the Super Bowl. There will be no title repeat, no chance at a fifth Super Bowl ring for Brady. There will be no fitting ending for the Deflategate Middle Finger Tour, which instead fizzled into something empty, like the climax came from a re-worked Damon Lindelof script rather than a Hitchcock film.

Brady was bad on Sunday. But he still deserved better.

Had Patriots kicker Stephen Gostkowski (who shouldered much of the blame after the loss) not missed his first extra-point try since 2006 in the first half, the game would have been headed to overtime after Brady found tight end Rob Gronkowski in the end zone with 12 seconds remaining in the fourth quarter. But seeing Bill Belichick’s recent propensity to mix things up (Patriots won the toss and elected to receive in Denver; kicking off against the New York Jets in the extra frame…) who knows what we should have expected if Gostkowski had extended his PAT success streak.

Give Patriots defensive coordinator Matt Patricia and his unit all the credit left over after lauding their Denver counterparts. After playing soft on Manning to start the game, and getting burned for it on a handful of occasions, the Patriots’ defense shut things down in the second half, allowing a lone field goal in the fourth quarter that ended up being the difference in the game. A dominant Jamie Collins was New England’s answer to Miller at linebacker. Despite some shaky stepping here and there, cornerback Malcolm Butler broke up plays at the most opportune moments.

But Brady and offensive coordinator Josh McDaniels just couldn’t figure out how to solve the pressure the Broncos were bringing for much of the game. Gronkowski seemed to have answered a couple of riddles on how to escape based on the way he exploded in the second half. But he also spent much of the Patriots’ precious time on the sideline sucking down oxygen and water while New England trainers held their breath that his ankles and knees would hold together.

Gronkowski (144 yards receiving) helped save the season — momentarily — with a surreal 40-yard grab from Brady with the Patriots going for it on a fourth-and-10 play with 1:34 remaining. His footwork in the end zone then helped the Patriots secure the last-gasp touchdown. But wide receiver Julian Edelman, who had seven catches on the day, couldn’t squirrel his way forward for enough extra yards during the game before repeatedly finding himself leveled by a Broncos defender. James White and Brady didn’t have their timing locked in, with the pass-catching running back just coming up short on a pair of passes, including one in the end zone. And all the while, McDaniels seemed to have trouble repeating what had worked — because, well, not much had — in creating a game plan for the second half. With the game in reach and the Patriots’ defense playing toe-to-toe with the Denver unit, the storyline shifted from Brady vs. Manning. The decisive drama involved a pair of defenses stopping both of the future Hall of Famers in their respective tracks.

They play this one at Gillette, and the Patriots are probably headed to Santa Clara, Calif., where Brady could have possibly passed by boyhood idol Joe Montana with a ring for his thumb. If you want to escape incessant second-guessing about Belichick kicking off against the Jets, McDaniels’s bizarre approach in the loss to Miami, or the utter incompetence of the home loss to Philadelphia, you might want to book the next few weeks in Canada. Hell, maybe Norway.

If the Patriots had emerged victorious from any of those regular-season affairs, Sunday’s game would have had a Route 1 address. It might have meant everything.

Instead, the precarious position they put themselves in ended up as their undoing.

The Carolina Panthers may end up demolishing the Denver Broncos in Super Bowl 50, just as they might have been able to handle the Patriots with a semblance of ease. But Brady still deserved the chance to add a career-defining game to a resume that already has a litany of them.

Despite the location and the inhospitable welcome from the Broncos’ defense, there was Brady with 12 seconds still on the clock in Denver, just a two-point conversion away from sending the AFC title game into an improbable overtime.

If only they’d kicked the field goal instead of going for it on fourth and six on the Denver 14 with 2:25 remaining, perhaps they’d already have the lead. Maybe the touchdown pass he’d just thrown to Gronkowski would go on the list of historic postseason moments that Brady has delivered over 15 years in New England, snatching the win from Manning, yet again, and keeping his historic moment in the Bay Area on track.

He tried to force it into Edelman.

The ball was picked off, but so too was a moment that should have been a satisfying chapter in Brady’s legacy.

Instead, he’ll weigh out the “what if’s’’ along with the rest of us, even as he pores over the free-agent lists and draft charts looking for offensive linemen who won’t get him killed when he’s — probably — still playing in another seven years.

Or, at least until the Super Bowl goes back to San Francisco.

How far away could that really be?

Photos from the Patriots’ loss in the AFC Championship game