Jim Nantz and Phil Simms will call their fourth Super Bowl together Sunday when the Broncos and Panthers square off on CBS. The work and approach of CBS’s No. 1 broadcast team is familiar. Maybe it’s too familiar, given that before the opening kickoff we can already predict with certain confidence a half-dozen things Nantz and Simms might do or say during the Super Bowl 50 broadcast. Such as …

1. Simms will say ‘We talked about [fill-in-the-blank subject]’…

Then he will proceed to talk about the most recent time — probably one that occurred just one commercial break earlier in the game — when he and Nantz actually had talked about [fill-in-the-blank subject]. Then, later in the game, he will take such reminders to a whole new level by talking about that time when they talked about talking about [fill-in-the-blank subject]. That’s right, he’s going to pull off the rare double We Talked About. Then he will talk about that topic some more. Make sense? Of course it doesn’t! I’m just trying to prepare you for the bewilderment, to ensure it will not be a surprise when Simms says, ‘We talked about [whatever].’’ No, the surprise will come if he does not do this at least 10 times in the game. There are worse broadcasting crutches to lean on. But there are few as familiar as Simms’s. Now please, can we stop talking about it?

That’s right, I said will. Nantz, the play-by-play announcer and Manning’s fellow Sony and Papa John’s pitchman, took a lot of heat when he didn’t mention the Manning allegations during the Broncos’ regular-season finale against the Chargers. The story had broken that week, and yet Nantz quickly dismissed it on Mike Francesa’s radio show in New York that Sunday morning before the Broncos-Chargers matchup.

“No, why would we?,’’ said Nantz when asked if it would be mentioned during the broadcast. “If we talk about it we would only continue to breathe life into a story that on all levels is a non-story. Why add another layer to it?’’

That seemed to offer damning insight into Nantz’s nothing-to-see-here mindset in regard to Manning, his media-friendly, commercial co-star. But what went scarcely noticed was that Nantz did mention it, briefly and in passing, while setting up a narrative during the first half of the AFC Championship Game between the Patriots and Broncos.

I imagine, since this “non-story’’ had another plot twist this week when it was revealed that Manning had his lawyers send private investigators to the residence of the primary source in the documentary that accused the quarterback of using human growth hormone, that Nantz will mention it during the broadcast. It will be so quick and subtle that you’ll have to be looking for it to catch it. But it will be mentioned. Just so he can say he did.

3. Nantz and Simms will overpraise Manning for everything he does right

But Manning will be praised for most things, including — hell, especially — the rudimentary and innocuous. Simms praised him in the aforementioned Chargers game for how well he was calling audibles, ignoring that Manning still had no velocity on his fastball that day and had probably emerged from the womb yelling, “Omaha! OMAHA!’’

Yes, Phil, I think we all know by now he’s mastered the art of the audible, and the handoff too.

In the AFC Championship Game, Simms called Manning “elusive,’’ when in reality he was running for his life from Patriots linebacker Jamie Collins. He wasn’t eluding anyone; he was looking for a vacant patch on the field upon which to curl up and wait for the whistle.

There’s probably no reason to further cite examples of what they will praise him for — you’re going to hear it all, every aggravating plaudit for the sudden underdog soon enough. And if Manning falls on his face, the praise will turn to excuses and big-picture lauding of his whole career. Get ready.

By the way, who the hell started calling him “The Sheriff,’’ anyway?

When did this start? He’s at best a deputy sheriff, like Enos from The Dukes of Hazzard.

4. Simms will be shown quarterbacking the Giants in Super Bowl XXI

And justifiably, too. Simms was the Most Valuable Player of the Giants’ 39-20 win over the Broncos, completing 22 of 25 passes for 268 yards and three touchdowns without an interception. He thoroughly outplayed the opposing quarterback that January 1987 day: John Elway, who is now the general manager in Denver. What will not be shown is Simms getting pummeled repeatedly by the Bears’ ferocious 46 Defense in an NFC title game loss the year before. You’ll have to watch a repeat of ESPN’s recent 30 for 30 on those Bears for that.

5. Nantz will subtly and passive-aggressively reveal his distaste for Cam Newton’s celebrations

Expect something like, “Well, Phil, he’s certainly entitled to enjoy the moment after throwing his Super Bowl-record seventh touchdown pass, but I can’t say I ever saw someone ‘dap’ at Augusta. Act like you’ve been there before, like my friend Fred Couples at the Masters in ‘92.’’

6. Simms will operate the telestrator with something considerably less than optimal expertise

His diagrams look like that pen marking you just discovered on the sleeve of your favorite dress shirt.

When he’s feeling super creative and inspired, he might just draw you a random 90-degree angle. John Madden he ain’t. In any way, now that you mention it. 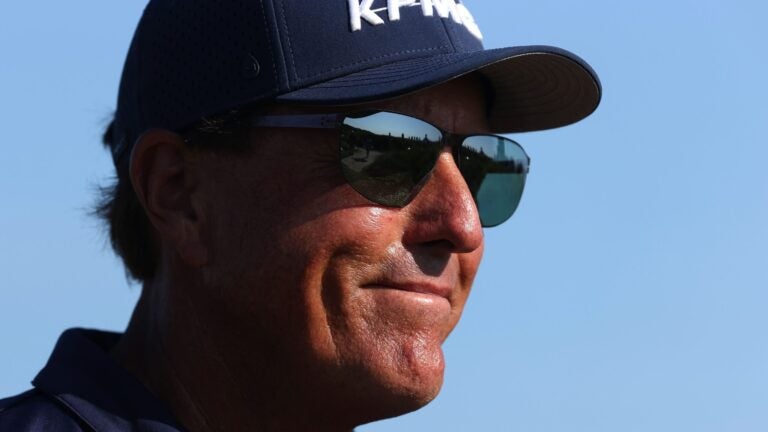 Phil Mickelson won one for old guys everywhere, even if we couldn’t jump out of our chair to cheer him