Fifty years ago, professional football’s civil war came to a formal end. The bitter conflict between the establishment National Football League and upstart American Football League had dragged on for more than six years, highlighted by intense infighting as each league struggled for supremacy.

Achieving peace was a painstaking process, but a critical one. Team for team, the modern NFL is the most valuable sports league on earth. The league found unprecedented strength in unity, helping to launch football past baseball in the national consciousness. After all, the AFL-NFL merger meant the Super Bowl was the season’s new culmination. In 2016, the Super Bowl is annually the most watched program in the United States.

Looking back on the merger, which was agreed to on June 8, 1966 (though not finalized until 1970), a number of forgotten moments stand out. Because of a league rule, the Patriots were forced to find a new home. And despite the growth that the merger eventually spurred, not all owners were happy about the deal.

Meaning of today’s 50-year anniversary of NFL-AFL merger can’t be overstated. It was major turning point in football.

“We were under a lot of pressure”

For the (then) Boston Patriots, the merger was far from a calming agreement. One of the specific rules that team owner William Sullivan found his team burdened with was that every NFL team had to have a stadium that sat at least 50,000. Every AFL team had until 1970 to meet the requirement.  At the time, the largest possible venue in Boston for the team was Fenway Park, which could only seat 32,000 in 1966.

An AP story from June 9 pointed out an ominous truth: “No Stadium By ’70–Patriots May Move.” In the article itself, Sullivan explained his logic.

In 2016, Sullivan’s son, Patrick, offered more insight into this forgotten chapter in team history during a recent interview.

“Foxboro came into the picture at the very last moment in 1969 I think it was,” said Patrick, who also served as the team’s general manager from 1983-1990. “We were under a lot of pressure to hit that requirement. We thought we had a deal for a stadium in Boston. It was actually going to be at Neponset right across the expressway where there are a bunch of fields now. That used to be a dump. We thought we had a deal there and it fell apart at the last minute.”

Of course, the Patriots eventually found a home that met the 50,000-seat minimum. Yet at the time of the merger, Sullivan’s predicament was far from the only one facing the newly merged league.

“We had them on the run”

Al Davis, who would go on to be known for his lengthy time as owner of the Raiders, initially hated the merger. In 1966, Davis was the AFL commissioner, and was fully committed to the ongoing fight between the two leagues.

“We were weak and I didn’t like it,” Davis said a day after the merger announcement. “It wasn’t the money, it was just that we had them on the run and gave in. They knew it, and that’s why they wanted to come to terms.” 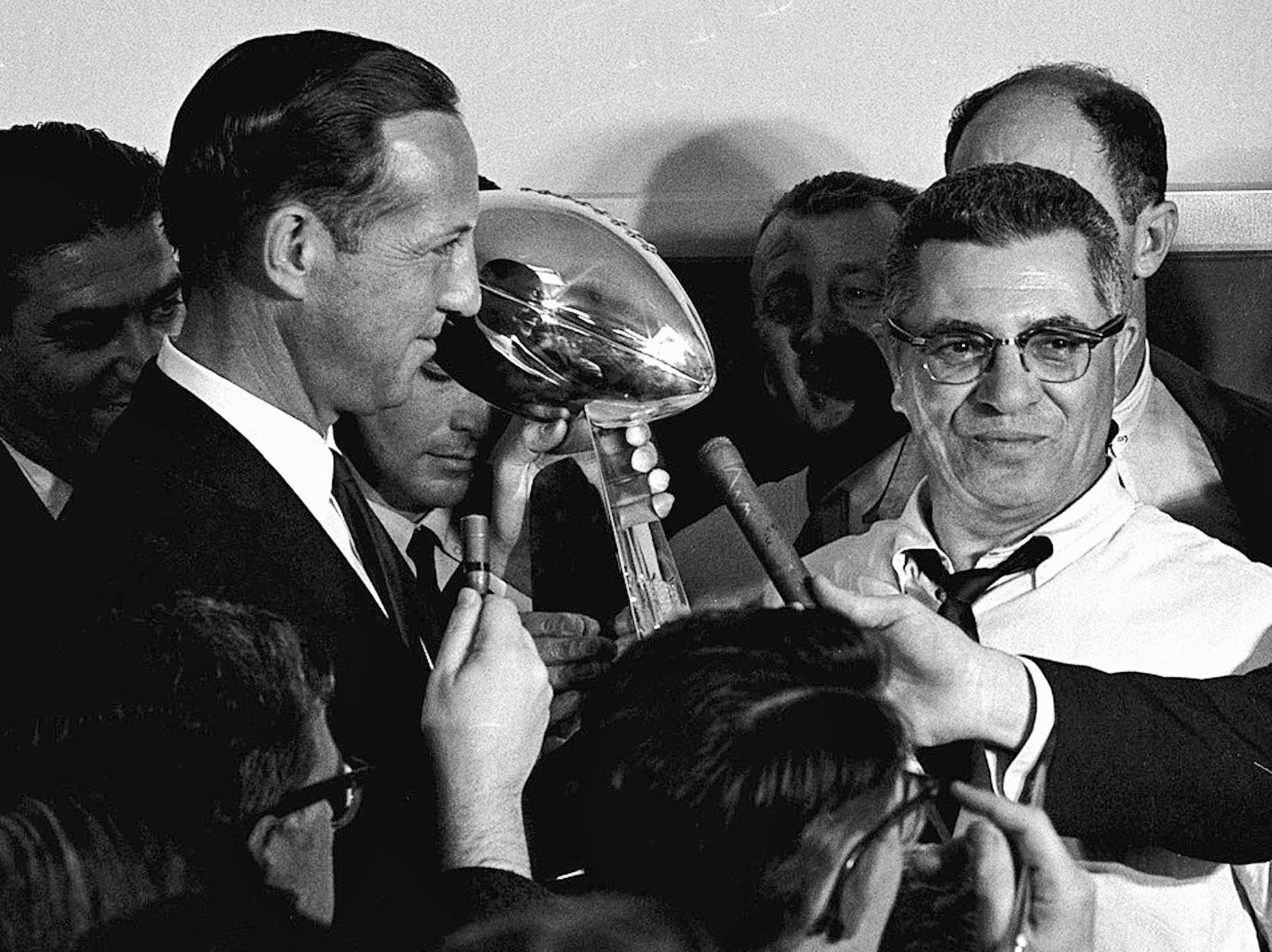 Pete Rozelle, not Al Davis, became the first commissioner of the post-merger NFL. He would preside over the first Super Bowl, won by Vince Lombardi’s Packers.

Davis had proven himself an effective wartime commissioner, raiding the NFL’s top talent in an ever-escalating bidding war.

“Al went out and signed three of the NFL’s best quarterbacks,” remembers Patrick Sullivan. “That wasn’t really a shot across the bow. That was a shot right at the midsection, and shortly after that the talks began in earnest and they culminated in the merger.”

Backing up this claim, the Globe reported on June 9, 1966 (in the same story where Davis voiced his complaints about the merger) that the AFL had previously been planning to sign another round of top NFL stars, including Mike Ditka of the Chicago Bears. With the merger, the raiding stopped.

“The Super Bowl—that’s my term for the championship game”

Looking back on reports from 1966, the many varying reactions to the merger were unified in one aspect: excitement over the AFL-NFL championship game. Given the intense rivalry that had developed in the previous six seasons, both sides (not to mention casual football fans) were curious to see what would happen in a decisive title game.

Of the many observations from the period, the one that stands out was a prophetic quote from the popular AFL personality.

“I’ll tell you one thing. I’m really looking forward to that title game between the two leagues,” said Jets quarterback Joe Namath in an AP story.

The former Alabama quarterback had become the highest paid player in football (AFL or NFL) as a rookie in 1965, and would famously lead the Jets to a historic upset of the Colts in Super Bowl III (still the team’s only Super Bowl win). 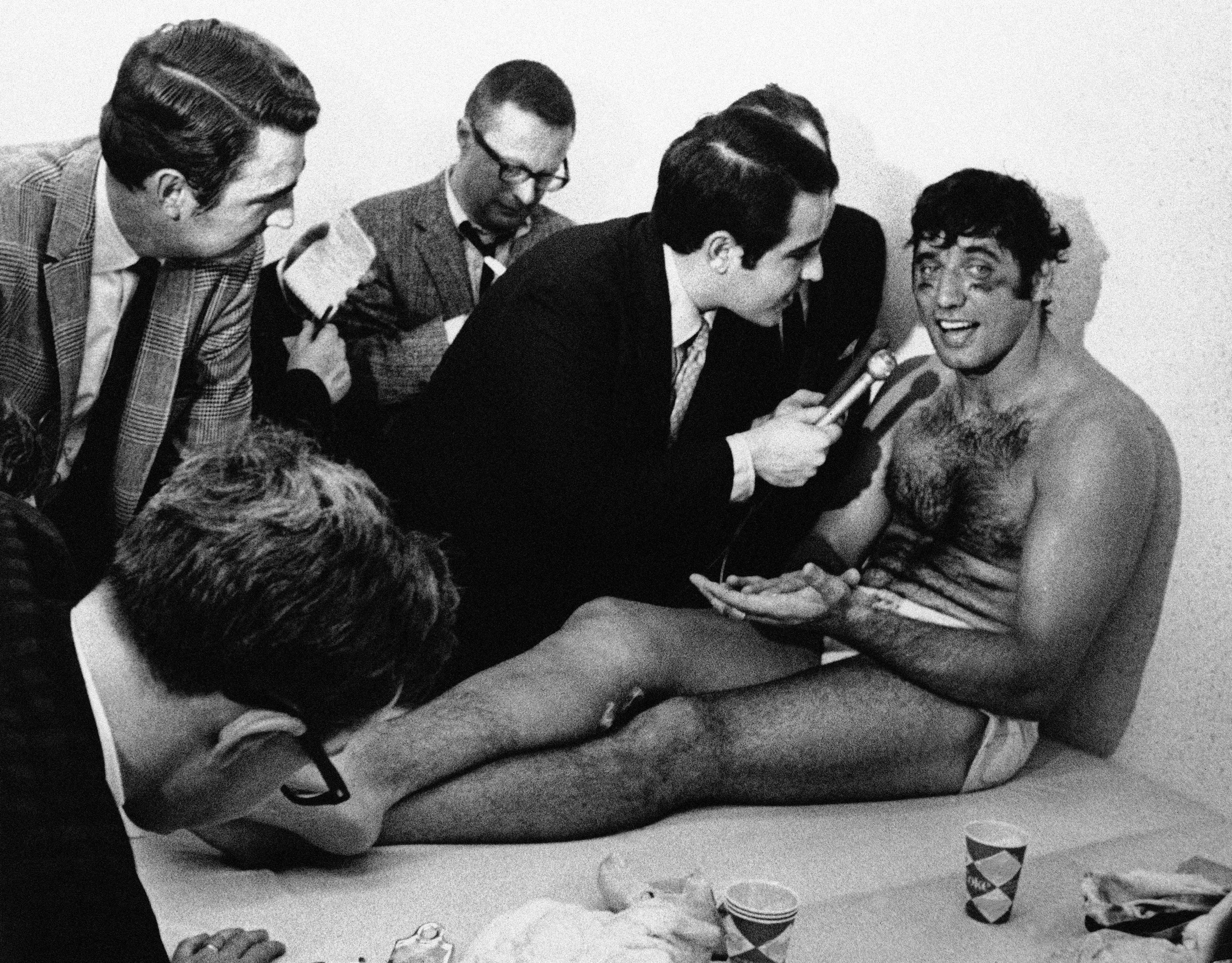 And even the name of the championship itself, the Super Bowl, was a brand new item in 1966.

Chiefs owner Lamar Hunt, who had been instrumental in the founding of the AFL, was also critical in the peacemaking merger with the NFL. While no mention of the term “Super Bowl” was made on the day of the announcement, Hunt was once again a football trendsetter.

On July 18, Hunt commented in the Globe about special AFL-NFL committees who were working out the details of the merger, saying:

I think one of the first things we’ll consider is the site of the Super Bowl—that’s my term for the championship game between the two leagues. I’m in favor of playing it on a neutral site where we would be assured of good weather.

With that, “Super Bowl” formally entered New England’s football lexicon, though it wouldn’t become the official championship game name until 1970.

‘I looked up and it’s Raymond Berry’

Patrick Sullivan’s lasting memory from the merger occurred only a few weeks after the June 8 announcement. While the AFL and NFL would remain separate until 1970 (only meeting in the Super Bowl), part of the merger provided for a series of inter-league exhibition games during preseason.

Sullivan, who like his father (and millions of Americans) had been so captivated by the 1958 NFL Championship between the Colts and Giants, was ecstatic that the Patriots agreed to play the Colts at Harvard Stadium during preseason.

“I was the visiting clubhouse attendant,” Sullivan recalled. “I was 14-year-old. I’m standing in this locker room and putting nameplates up that say ‘Johnny Unitas,’ ‘John Mackey,’ ‘Raymond Berry.’ It was all these guys that had played in that game. It was so memorable.”

And a postgame moment would have profound significance in the scope of Patriots history:

I remember distinctly at the end of the game, players put their stuff into duffel bags that said Baltimore Colts on the side. So I’m carrying these bags out and I’m going to throw them on a truck. And this guy leans over and says, ‘let me help you there, son.’ I looked up and it’s Raymond Berry. I just was so astounded that we had gotten to the point where we were in the same company as those guys.

Fewer than 20 years later, Sullivan (by then the team’s general manager) would hire Berry to be the coach of the Patriots. One season later, Berry led the team to its first Super Bowl appearance.