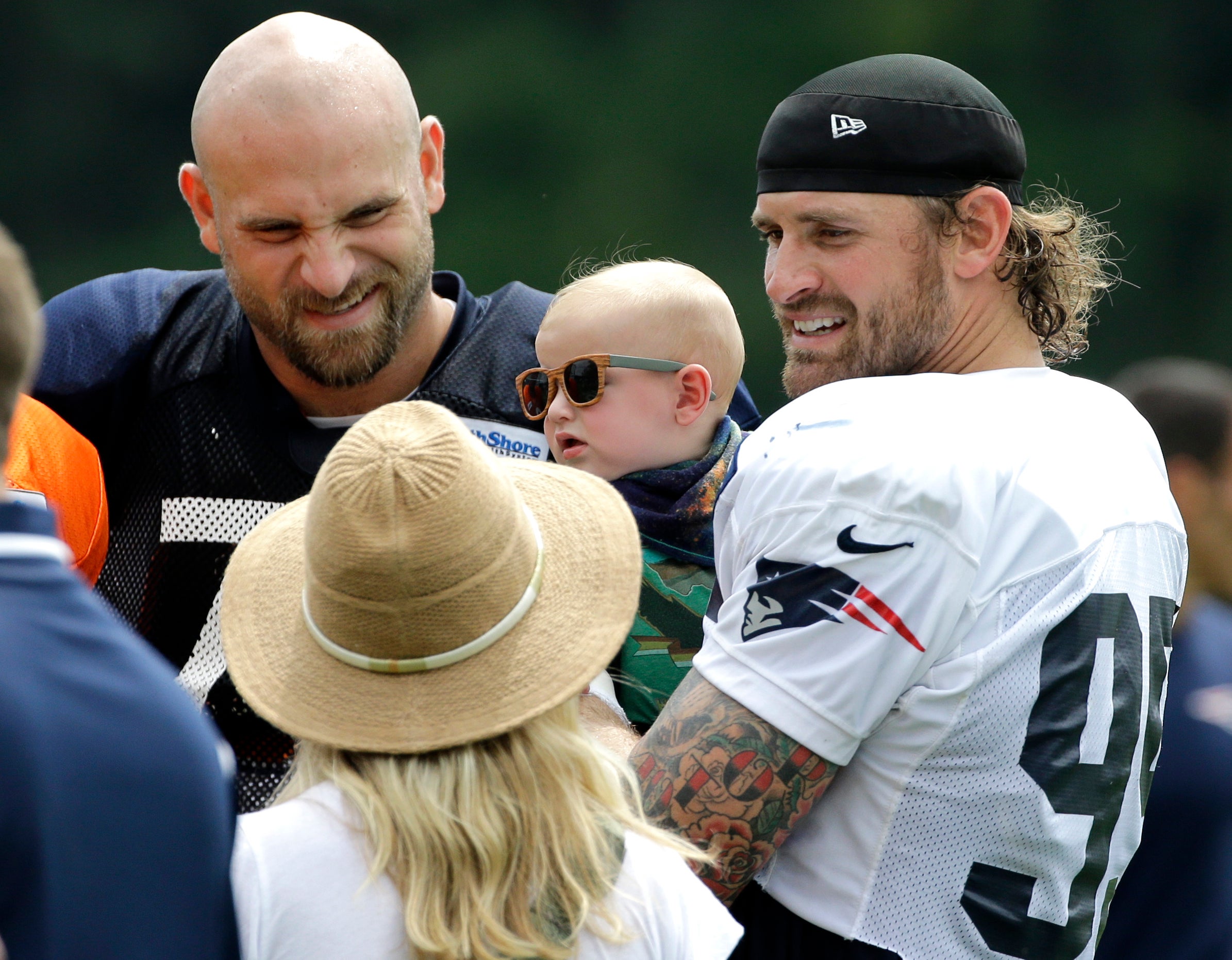 FOXBOROUGH, Mass. (AP) — Big brothers have been known to pick on little brothers from time to time.

That is, of course, until that little brother grows to be a few inches taller and 50 pounds heavier.

Such is the case for brothers Chris and Kyle Long, who are at different points in their NFL careers entering the season.

Kyle, the Bears’ three-time Pro Bowl offensive lineman, will be counted on at right guard to help protect quarterback Jay Cutler as Chicago looks to move on from a forgettable 2015 season.

Meanwhile, on the defensive side his older brother, Chris, is trying to make the most of the one-year deal he signed with the Patriots following an eight-year stint in St. Louis.

Chris, 31, has had no problem deferring to his younger sibling as the teams participate in joint practices in advance of Thursday night’s preseason matchup.

“Hitting my brother? Not a lot. He’s like a big tree stump, so luckily I’m out there on the edge and we didn’t have to deal with each other much,” Chris said of the 6-foot-6, 320-pound Kyle.

Coach Bill Belichick said it hasn’t been too hard to tell them apart.

“One big one and one not-so big one,” Belichick said about the siblings, who are extending the legacy of a family tree first established in the NFL by their Hall of Famer father, Howie Long.

The “big one” is the younger Kyle, the 27-year-old and three-time Pro Bowl right guard in his fourth season as a key part of the Bears offensive line.

He has started all but one of Chicago’s regular-season games since 2013, and will switch from tackle back to right guard.

The hope is that his inside presence will help fortify a line that allowed Cutler to be sacked 29 times last season.

Growing up in a rambunctious house that featured Chris and his baby brother, Howie, Jr., was never void of activity.

Chris has yet to appear in the playoffs during his eight seasons. So a spot on the Patriots’ roster is a chance to be a part of a winner.

And with the recent injury to starting defensive end Rob Ninkovich, it also could mean a chance to make a significant contribution late in his career.

Kyle was drafted out of high school by the Chicago White Sox in 2008, but opted to take a baseball scholarship at Florida State. That was short-lived, though, with a DUI his first semester leading him first to a junior college in 2010 and finally to Oregon in 2012 to resume his football career.

One of his biggest supporters along the way has been Chris.

“I just enjoy kind of watching him grow into being a man in this league,” Chris Long said. “I know the work that it takes and I just think, more than anything, just seeing the way he’s plugged away, he grows up every year.”

Having a player of Kyle’s caliber on the field this week has also been helpful for a New England offensive line also trying to rebuild after Tom Brady was sacked 38 times in 2015.

Chris has been slowed some the past two years by knee and ankle issues. But Kyle said he’s expecting big things out of him this season.

“He looks strong, he feels strong and he’s a competitor,” Kyle Long said.

As for Thursday night, Kyle said there will be a few more family members in the stands than usual. They include their mom, Chris’ wife and Kyle’s nephew, Waylon, who was born in March.

“He was definitely neutral,” Kyle said. “He had a blue hat on, which was also neutral. So he knows how to play the game already.”

Notes: Patriots TE Rob Gronkowski was absent from the practice field Tuesday, a day after he pulled up short while running a passing route and left the workout early with a trainer. … Bears TE Zach Miller and WR Eddie Royal (concussion protocol) were both absent. … Patriots S Nate Ebner returned after taking a leave of absence to compete for the U.S. Rugby team in Rio. He spent the day on the sideline in a jersey and shorts. … Bears coach John Fox chatted with Patriots TE Martellus Bennett after practice, and at one point knelt to play with Bennett’s daughter. The pleasantries came months after the lack of a contract extension in Chicago opened the door for Bennett’s trade from Chicago to New England. … Earlier this month Bennett tweaked his former club when he and his brother, Seahawks defensive end Michael Bennett, made critical comments about Chicago quarterback Jay Cutler. But Fox insisted this week that there was “no ill will, or anything like that” toward Bennett following his departure. … Patriots CB Malcolm Butler and Bears WR Alshon Jeffery, who were ejected from practice after an extended shoving match Monday, exchanged a high-five prior to lining up against each other in a one-on-one drill. … Patriots C Bryan Stork was kicked out of practice after head-butting Bears LB John Timu. … The Patriots released Brock Vereen. He was signed by the Patriots to the practice squad on Nov. 18, 2015. The 5-foot-11, 200-pounder, entered the NFL as a fourth-round (131st overall) draft choice by Bears in the 2014 draft out of Minnesota.

What Richard Seymour said in his Hall of Fame speech