For a brief period of time in the 1960s, local leaders seriously considered a three-pronged plan to replace the Boston Garden, make Fenway Park obsolete, and build a 53,000-seat stadium near South Station.

It was a bold plan by any calculation, showcasing a Boston attitude towards redevelopment that was at its peak during the John Collins mayoral administration when projects such as Government Center and the Prudential Center took shape. It was a time famously dubbed “New Boston.”

This particular version of the plan (shown below) was only a single frame of what became more than 30 iterations of designs to try and build a stadium in Boston over the course of the decade. Saddled by political opposition and bureaucratic infighting, the movement to build a downtown stadium and brand new arena ultimately failed.

Given both the 2015 public debate about the Boston 2024 Olympic bid as well as a possible city venue for the New England Revolution, the local discussion about stadium building remains a relevant issue. And as voices in Boston politics call for another “New Boston,” it’s worth looking back on the last time the Hub tried to include sports as part of its redevelopment.

Here’s a map that the Boston Redevelopment Authority had in its archives pertaining to the building of multiple new sports venues during the mid-sixties: 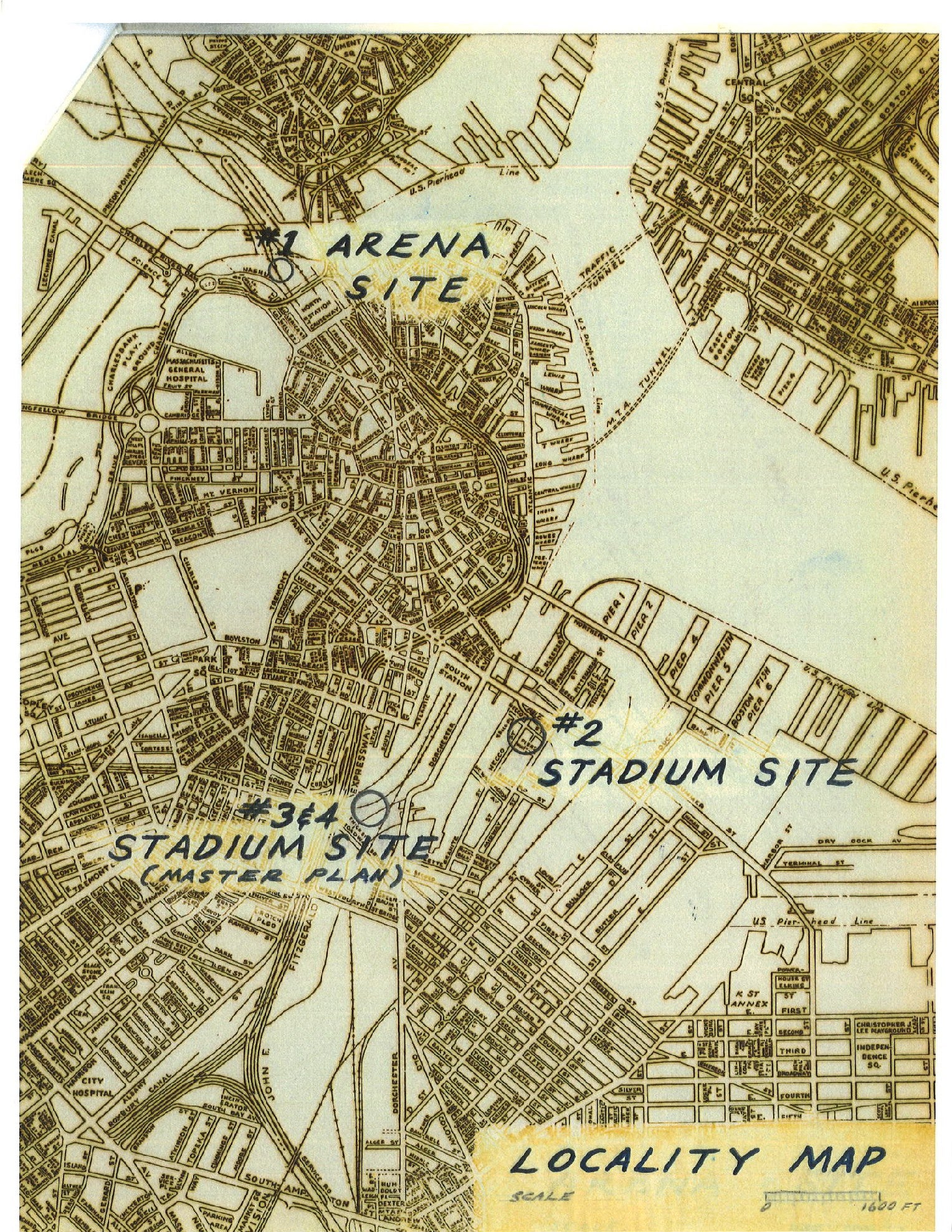 A map from the 1966 plan to replace the Boston Garden and build a football stadium near South Station.

It showcases a few key concepts, including the desire to construct a new stadium in the South Station/Fort Point area. The map also highlights the possibility of another site in the South Station vicinity, as well as a potential area to build a new Boston Garden (located essentially on top of the old site).

This plan, which made its public debut in early 1966, was only the latest in what had already been a fairly long line of proposals that formally began with the creation of the Greater Boston Stadium Authority in 1962.

The Patriots, then a member of the fledgling American Football League (which began play in 1960) needed a permanent home. And Fenway Park, even in 1960, was already almost half a century old. Still, not everyone was happy about the stadium authority’s creation.

“I’m not against a stadium,” said Cambridge’s Francis X. McCann of the Massachusetts senate on July 28, 1962. “I’m against the manner in which this (authority) has been established.”

The charge was that the bill creating the authority was too vague, and that it was potentially taking advantage of public interests.

“Under the terms of the stadium bill we have taken public funds for private purposes, a clear violation of the Constitution,” said McCann told the Boston Globe. Yet the bill was signed into law. It set an ominous tone, and the political discord never fully healed.

Plan after plan was proposed, considered, and rejected. Whether it was due to a lack of consensus between city or state agencies or political opposition, each plan slowly petered out.

Patriots owner Billy Sullivan, who was the initial head of the stadium authority, was dubbed “Sully the Dreamer” by Globe columnist Bud Collins for his perpetual optimism in the face of continual rejection.

Each version of the South Station plan had some unique twist to it. One iteration proposed building a stadium, arena and parking garage in one giant sports complex near South Station. Another envisioned the stadium having a roof on it, similar to the Houston Astrodome.

The cost to the public was a constant source of opposition, as one Globe letter to the editor noted in November, 1966:

Why do our government officials think that what people want is to pay out of their own pockets for a stadium designed to be completely non-unique and amass enormous profits for the owners of the Red Sox and others? It is outrageous of the government and a few millionaire businessmen to expect the people to pay $98 million for this foolishness.

By 1967, the prospect of combining the project to rebuild the Garden with the new South Station stadium was being phased out. And the political climate was beginning to turn against a Boston stadium altogether.

“Currently you couldn’t get a winning vote for a resolution to commend George Washington in that place,” Collins wrote in a column in December of ’67. Red Sox owner Thomas Yawkey, who had initially been intrigued with the stadium possibility, had taken on a realistic viewpoint.

“Knowing the political climate around here, I expect we’ll be playing in Fenway Park for as long as I live. I don’t really mind. I like the place.”

Yawkey’s statement, whether intended seriously or born out of frustration, nonetheless proved prophetic.

As the Patriots approached the NFL-imposed deadline on building a stadium capable of seating at least 50,000, the planners abandoned any hope of an eye-catching South Stadium site. Eventually, an alternative area to build was identified in the “Neponset section of Dorchester.” But in the climactic Boston City Council vote on March 23, 1970, the stadium proposal was voted down 7-2 . 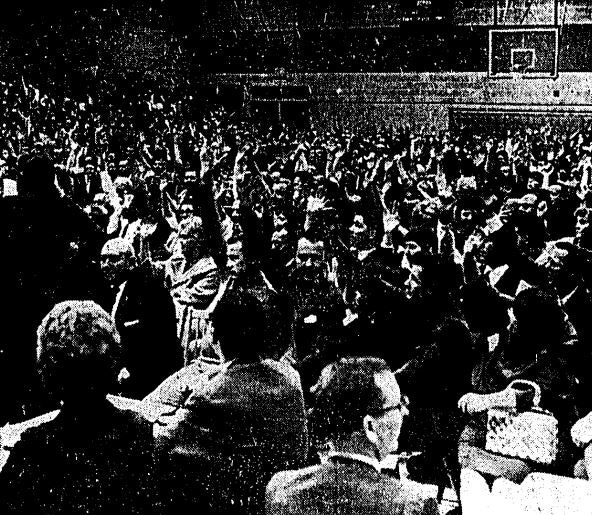 Foxborough residents vote on the stadium question during a town meeting on April 14, 1970.

Sullivan was finally lured away from Boston all-together. Foxborough famously stepped in. And with remarkable speed, the small town formalized its ambition to be the home of the Patriots. On April 14, 1970, at an “overflow special town meeting in the Foxborough High School gym,” residents voted on the proposed stadium.

It wasn’t even close. According to Globe writer David Taylor, 1,852 town residents voted in favor, with only 84 voting against the stadium. After a decade of disappointment in Boston, Billy Sullivan and the Patriots found not only a welcoming crowd, but a new home.