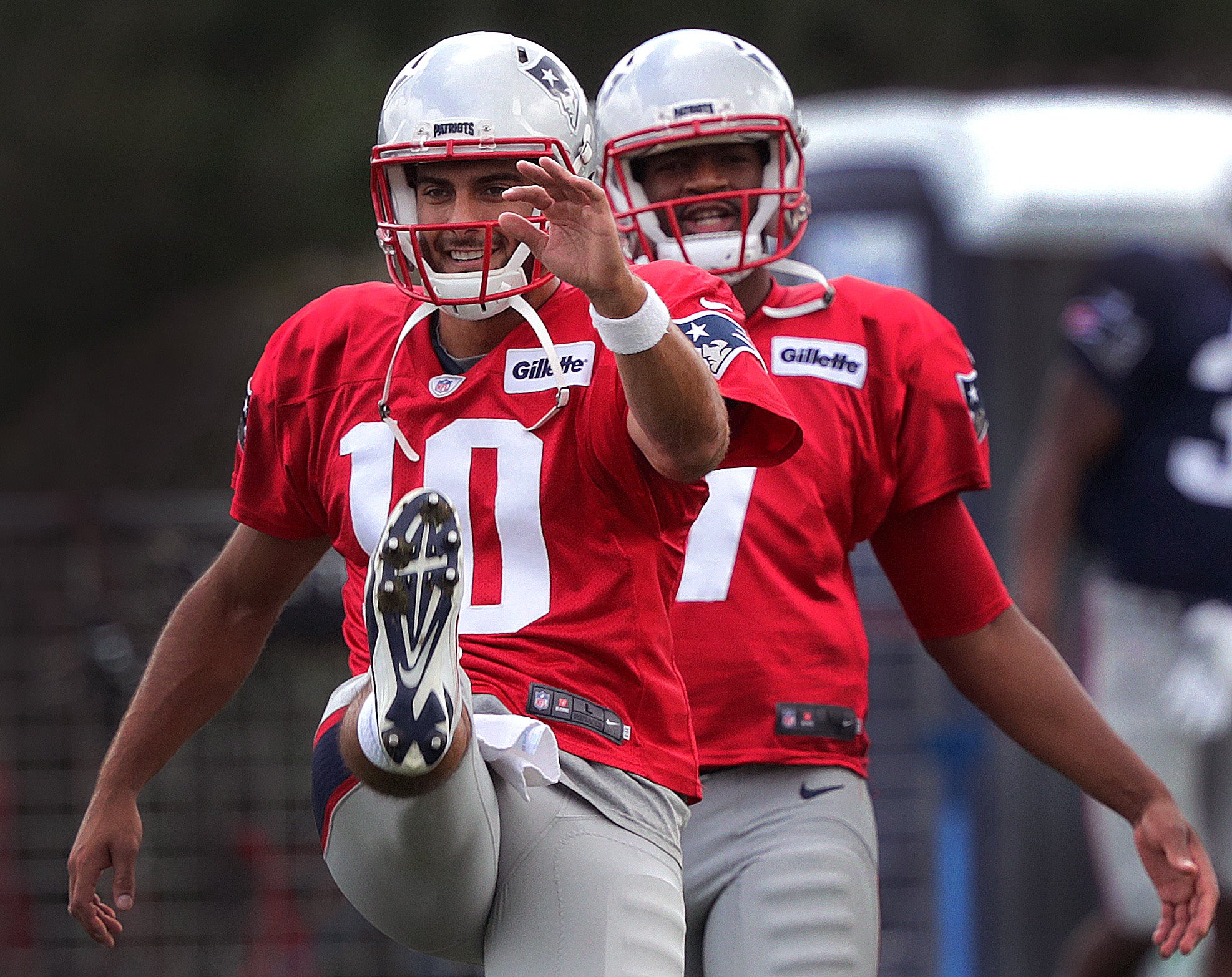 Quarterbacks Jimmy Garoppolo (10) and Jacoby Brissett (7) loosen up during the stretching portion of Thursday’s Patriots practice in Foxborough.

FOXBOROUGH, Mass. (AP) — The 2016 season is still in its first month, and so far nothing has been able to stop the New England Patriots.

Not the injuries to both of Brady’s backups.

And certainly not the efforts of their first three opponents.

It’s their old buddy Rex Ryan’s turn to give it a try.

Ryan is back in New England (3-0) Sunday for the second time since taking over as coach of the Buffalo Bills (1-2).

But he, like the rest of the AFC East, hasn’t had much luck against Bill Belichick’s bunch.

Including his six seasons as coach of the Jets, Ryan is just 4-11 against the Patriots, dropping nine of the past 10 matchups.

After being swept in two meetings last season, Ryan isn’t lamenting what the Patriots won’t have during this latest clash.

“One thing I know for sure is that Tom Brady is not the quarterback and I feel good about that,” Ryan said.

Sunday marks the final game of Brady’s four-game suspension for his role in the “Deflategate” saga.

But just as it was when he began his suspension, the biggest question continues to focus on the quarterback position.

Jimmy Garoppolo, who injured his throwing shoulder during New England’s win over the Dolphins in Week 2, began the week working his way back into game shape.

The same was true for third-stringer Jacoby Brissett. He made his first career start in place of Garoppolo in last week’s win over Houston, but suffered a right thumb injury.

Everyone in the Patriots’ camp has been mum about the plan at quarterback this week, prompting Ryan to take over a reporters’ conference call and ask receiver Julian Edelman — New England’s emergency option— whether he might get a start there. Edelman told him to ask Belichick.

“Haven’t talked to him yet,” Ryan said, “but I’m sure I’ll call him later today and Bill will tell me.”

What is certain is that a win even against a Brady-less Patriots team would go a long way for Ryan. That’s especially true after the Bills averted spiraling into crisis with their 33-18 win over Arizona last week.

But having to make adjustments because of injuries is nothing new for this team, Garoppolo said.

“It’s just football. I think everybody in this locker room is doing that.”

Here are some things to watch for in Sunday’s game:

PATRIOT REIGN: Beating the Patriots won’t be easy for the Bills. New England has won 28 of the past 32 games between the clubs going back to the 2000 season.

MAKING IMPROVEMENTS: The Bills improved mightily on offense last week in new coordinator Anthony Lynn’s first time calling plays. They did so without top receiving threat Sammy Watkins (left foot) and starting LT Cordy Glenn, who missed his second straight game after aggravating an injury to his left ankle. Watkins didn’t practice Wednesday or Thursday and Glenn was limited. It could put more of a workload on LeSean McCoy , who had 110 yards rushing and two scores against Arizona. “This game will be big in the management of the ball, managing the ball, staying on the field,” McCoy said. “I think on defense they’ll do a lot of different unique types of looks (and) blitzes. As an offense we’ve got to put points up.”

TYROD’S PROGRESS: QB Tyrod Taylor also found his legs last week with 76 yards rushing and a score to match the single-game franchise record for quarterbacks he set last season. But the passing game remains an issue as Taylor went 14 of 25 for 119 yards. It was the second game this season he’s been held under 120 yards passing. His most glaring deficiency is that he’s still having trouble throwing over the middle and getting through his reads. “The Patriots definitely do a good job of taking away what you do well and them forcing me to have to stay in the pocket is definitely something that we have in mind,” Taylor said.

BLOUNT FORCE: While New England has been forced to shuffle quarterbacks, RB LeGarrette Blount has been a constant on offense. He was selected as the AFC offensive player of the month and leads the NFL with 298 rushing yards. He’s also tied for the NFL lead with four rushing touchdowns. His 105 yards against Houston gave him back-to-back 100-yard games. His four touchdowns tied Marion Butts (1994) and Corey Dillon (2005) for the most for the Patriots in the first three games.

MORE GRONK? Patriots TE Rob Gronkowski played sparingly during his regular-season debut last week. He was on the field for just 14 of 62 offensive snaps last week, or 23 percent of the time. He’s still nursing a tender hamstring, but should be more involved this week. 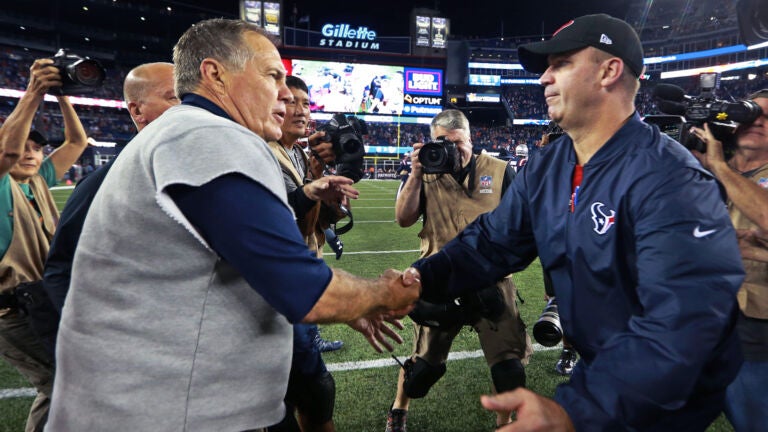