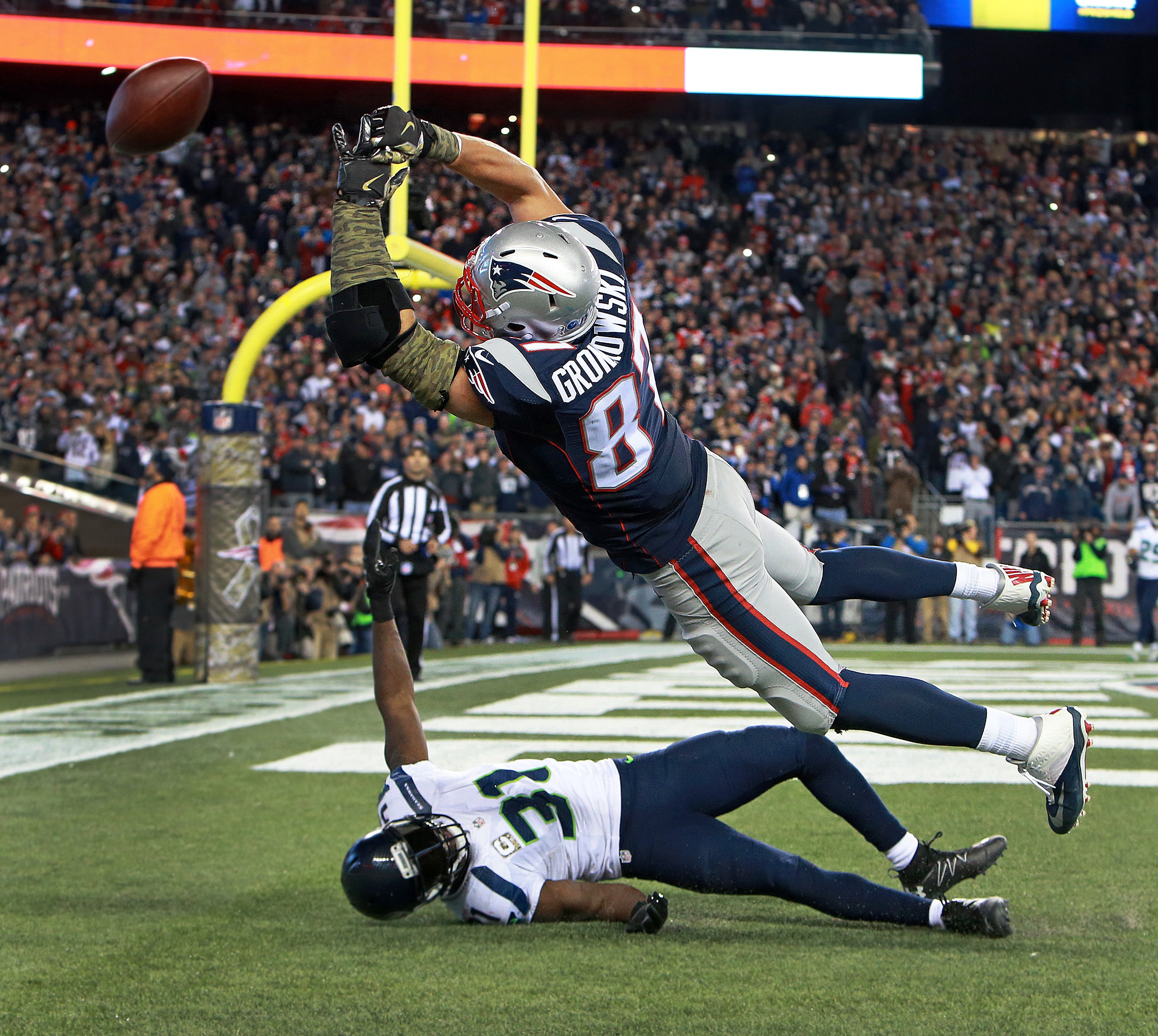 FOXBOROUGH, Mass. (AP) — This time, Seattle won it at the goal line.

It certainly won’t make up for the Super Bowl loss two seasons back, but the Seahawks’ goal-line stand lifted them to a 31-24 victory over the New England Patriots on Sunday night.

Tom Brady couldn’t connect with Rob Gronkowski on a fade pattern on fourth down as New England (7-2) failed four times from inside the 2 in the dying moments.

‘‘He was playing off me … pretty far, farther than usual,’’ Gronkowski said about safety Kam Chancellor. ‘‘You don’t usually see that. A fade, I had to go up to him and initiate a move. I just wanted get on top of his toes, that is what you are taught. I just got up on his toes too much.’’

It was reminiscent of how the Seahawks (6-2-1) lost the 2015 Super Bowl when Malcolm Butler intercepted at the goal line to win the NFL title for the Patriots.

Doug Baldwin caught three touchdown passes from Russell Wilson, including a 15-yarder for the final margin. Strangely, Seattle went for 2 points and failed on the conversion, leaving the Patriots a chance to tie with a touchdown and an extra point kick.

But LeGarrette Blount, who earlier rushed for three touchdowns, couldn’t get into the end zone from close range, nor could Brady on a pair of sneaks.

‘‘Our execution wasn’t great,’’ Brady said, ‘‘and they put a lot of pressure on you defensively. They have a lot of good players and they make you earn every yard. They play to the end, they have been in a lot of close games.

A GAME OF SWINGS

It was a fierce, sometimes viciously physical game. Gronkowski took one particularly hard hit from Seahawks standout safety Earl Thomas and temporarily had to leave the game in the first half.

It also was a game of big plays and big swings, perhaps none more so than Julian Edelman’s spectacular over-the-shoulder 33-yard catch on a third-and 25 to end the third quarter. That set up Stephen Gostkowski’s 30-yard field goal for a 24-22 lead.

Or maybe it was rookie C.J. Prosise’s 38-yard catch between two defenders to the New England 2, leading to Hauschka’s fourth field goal after a strong goal-line stand by the Patriots.

Or any of Baldwin’s three TD receptions.

Or, in the end, the power of Seattle’s interior defense on the short runs by Blount or Brady, and Kam Chancellor’s tight coverage on Gronkowski on the final play.

Blount scored twice on 1-yard rushes, bulling his way into the end zone on the second score. He also scooted left for a 13-yard TD in the third period for a 21-19 lead.

Brady’s interception in the second quarter derailed the Patriots’ chance to tie the 1960 Cleveland Browns for an NFL-record nine games without an interception. DeShawn Shead made the pick.

New England had thrown 258 passes before being intercepted.

Someday perhaps teams will learn not to defer when winning the opening coin toss against New England. The Patriots drove relentlessly for 75 yards and their opening touchdown after the Seahawks did precisely that.

New England has scored touchdowns on five of its opening nine drives this season, three of those with Brady at quarterback.

Seattle: The Seahawks host the Eagles.

New England: The Patriots also play on the West Coast next Sunday, at San Francisco.