Whatever you might thing about 2016 being the worst year since the dawn of the Roman calendar (it wasn’t), we had our bright spots on the Boston sports landscape. But it wasn’t all great.

It was only one month after Red Sox manager John Farrell told the media at the annual Boston Baseball Writers dinner that weighty third baseman Pablo Sandoval had lost 20-22 pounds that Boston’s marketing free agent signee showed up to Fort Myers looking as if he’d spent the winter bellied up at Shake Shack. Then initial photos emerging from Florida were not flattering, which instantly put both Sandoval and Farrell in the crosshairs of warranted criticism. Sandoval looked like he was willing to cruise through the $95 million contract that the Red Sox gave him in hopes of sparking “Pandemonium” and maybe hit a baseball here and there, while Farrell further played the role of player enabler, unable to escape what was clearly an exaggeration of the truth when he reported how Sandoval looked during an in-person visit last offseason. It ended up being a lost season for Sandoval, who was sidelined with a shoulder injury that, while legit, was also convenient. And now we’re hearing, once again, how committed the third baseman is to getting back into playing shape, Instagrams and all. As last February attested, we’ll see.

The Patriots are 4-0 without their superstar tight end, so there’s little fretting about what his absence might be during another Super Bowl run, but the fact that the 27-year-old was forced into his third back surgery last month enhances the lingering concerns about just how long his career might arc. It also could spark trade talks sooner than anyone might have hoped, especially if Bill Belichick has grown tired of the frequent injuries and the Gronkowski family’s constant involvement. Martellus Bennett was brought in to employ the two-tight end formations that have become such a success for the Patriots, but also as insurance should Gronkowski be forced to end a season due to injury yet again. And here we are. Gronk still has three years remaining on the six-year, $54 million contract he signed with the team in 2012, making $4.25 million in 2017 before his salary jumps to $8 million in 2018. Which means he’s almost certainly here for one more season. But beyond that… 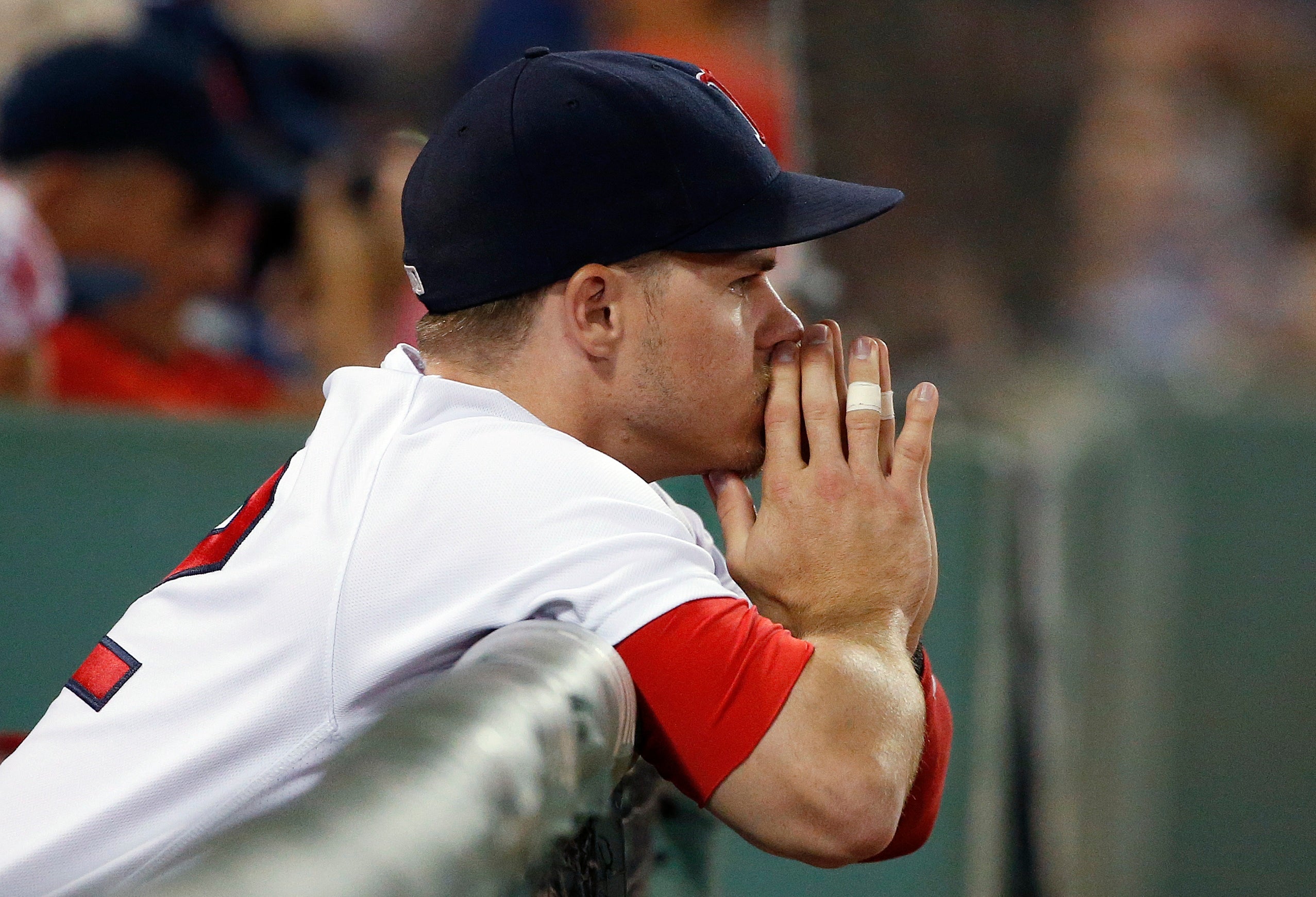 Boston Red Sox’s Brock Holt watches from the dug out during the ninth inning of a baseball game against the Los Angeles Angels in Boston, Saturday, July 2, 2016. The Angels won 21-2.

In the grand scheme of a full season, one game doesn’t write the script for a team, particularly one that won the American League East, but the Red Sox’ 21-2 loss to the Los Angeles Angels still turned out to be an historic bummer. It became the first time the team had allowed 20 or more runs since 2012 (Bobby V., forever), and was the first time the Sox had lost by more than 19 since 2000, (Brian Rose took that loss allowing five runs over five innings; Rob Stanifer allowed nine over 2/3 of an inning).  The loss sunk former (FORMER!!) Red Sox starter Clay Buchholz to a 3-9 record with a 5.91 ERA, clearing the runway to a bullpen stint. He was, typically, delusional about his performance (4 1/3 innings, seven hits, six runs, three earned, one walk, two home runs). “I mean, I only gave up three earned runs,” he said. “It wasn’t the worst performance I had all year.” Yikes. The same couldn’t be said for Robbie Ross Jr., who managed to surrender five hits and six earned runs over 1/3 of an inning.

7. Bill Belichick and Tom Brady distance themselves from support for Donald Trump.

“Seattle.” That’s how the Patriots head coach infamously ended any more questioning about why he wrote a letter to the campaigning President-elect, with the apparent permission for Trump to read his endorsement on the campaign trail in New Hampshire. Likewise, Brady put a halt to any Trump discussion in the days after the Presidential election, this despite the presence of a “Make America Great Again” hat that had found residence in his locker. Yet, the duo shrunk from public inquiries into their support for the polarizing figure, only after seemingly open support. “Our friendship goes back many years and I think anybody that’s spent more than five minutes with me knows I’m not a political person. My comments aren’t politically motivated,” Belichick said. Obviously, they had the right to back and support any candidate of their choosing, but Belichick’s insistence on his letter being a non-political entity is hogwash, and his slithering from the responsibility of addressing what became a public stance had a bad taste. But, whatever. Seattle.

6. Celtics wind up with the third pick in the 2016 NBA Draft

They landed with the pick they were most likely to get, so it wasn’t like the lottery was a complete disaster, but any chance that the Celtics might finally find good fortune in landing either the No. 1 or No. 2 picks (thanks, Brooklyn) in the 2016 draft went kaput in June. That left them with Jaylen Brown rather than Ben Simmons or Brandon Ingram, not exactly the worst scenario, but Brown hasn’t managed to find the minutes that Ingram has with the Los Angeles Lakers in his rookie season (7.5 points per game, sixth among rookies). Simmons has been lost to an ankle injury, so time will only tell about his professional effectiveness, but this still remains a disappointment based on the returns once hoped the pick might yield. So far, that is.

5. The Winter Classic winds up a disaster.

For all the anticipation (not to mention the exorbitant cost of tickets on the legalized scalping market), the Winter Classic was a major fail for the Boston Bruins, who fell to the Montreal Canadiens, 5-1, at Gillette Stadium on New Year’s Day. It wound up becoming the most lopsided score in the Winter Classic’s short history, and a hint as to where the Bruins were headed during the 2015-16 season. A crowd of 67,246 watched the Canadiens jump out to a 1-0 lead after the first period, increased to 3-0 after two, which is about when the rest of the Bruins gave up, those who showed up to begin with. It might have ranked as the worst loss for the team all season long, but that was still to come (see below). Cool sweaters though.

In a ruling that supported the NFL’s labor agreement involving player punishment rather than supporting fact and sanity, Brady’s four-game suspension, handed down by commissioner Roger Goodell nearly a year earlier, became official, forcing the Patriots quarterback to miss the first quarter of the season. The Patriots managed to go 3-1, and Brady has the inside track of winning the league MVP, despite having played in only 11 games to date, so, boo hoo. But the ruling still gave the NFL the power it sought during the entire charade, which out another asterisk aside the name of the Patriots for those who feel the need to apply one. That decision, just like the entire Deflategate saga, remains foolish.

3. Tuukka Rask has the flu and the Bruins vomit away a chance at the NHL Playoffs 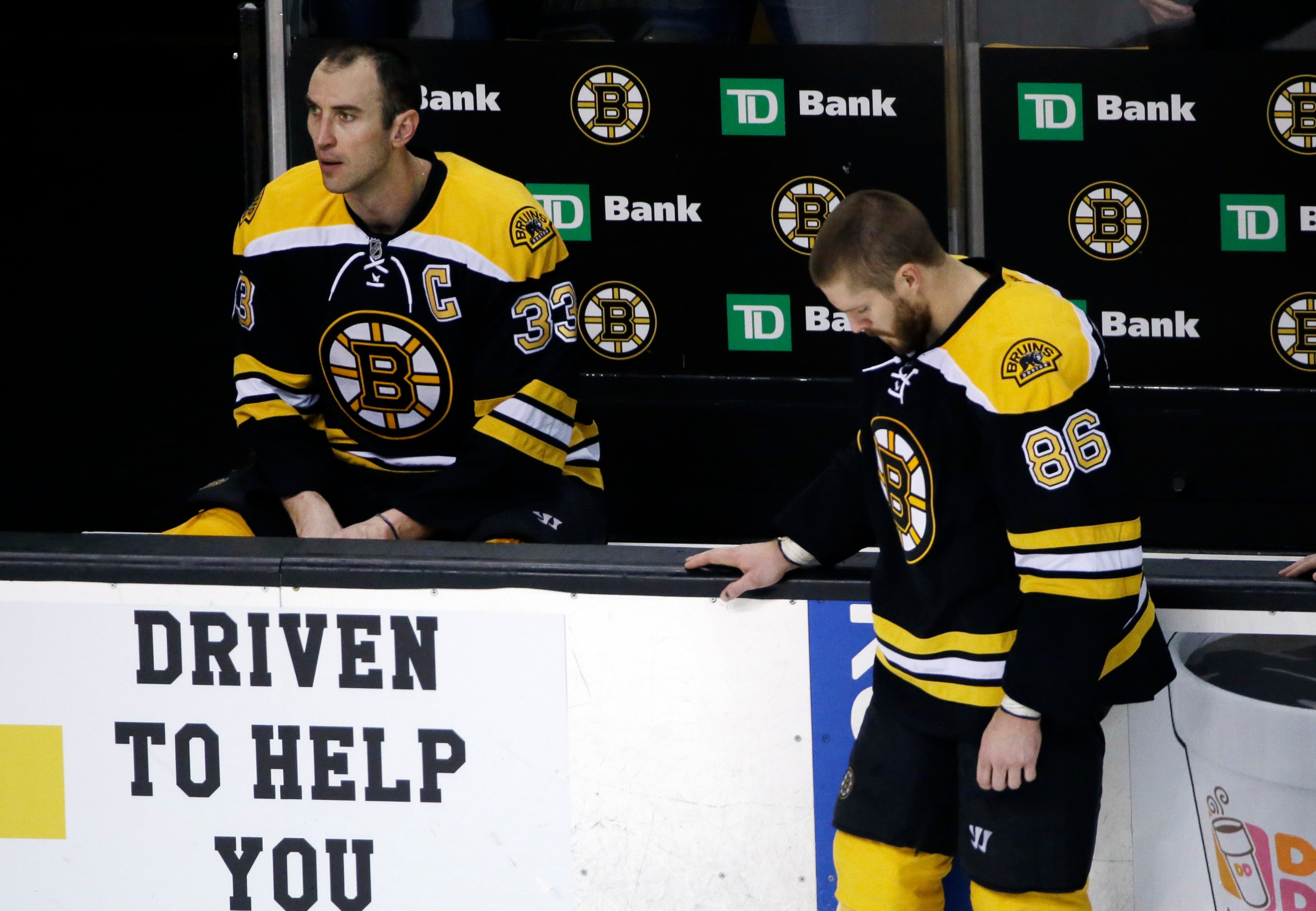 Boston Bruins defensemen Zdeno Chara and Kevan Miller react near the bench after they lost to the Ottawa Senators, Saturday, April 9, 2016.

All the Bruins had to do was beat the terrible Ottawa Senators on the TD Garden ice in their final game of the season and hope the Detroit Red Wings would lose to the New York Rangers in order to avoid a second-straight season of missing the postseason. Instead, the Bruins’ starting goalie came down with the flu and was unable to go in the season finale. As the Ottawa Citizen described it, “the Bruins were embarrassed by a Senators roster full of American Hockey League call-ups.” Ottawa won, 6-1, completing a second-straight season of the Bruins collapsing down the stretch. Backup goalie Jonas Gustavsson. surrenders four goals in the first 10 minutes of the second period that day, and everything went down the drain. “It’s unacceptable,” Patrice Bergeron said. “We didn’t show up. You can’t win games if you do that.” Oh, the Red Wings lost to the Rangers, 3-2, twisting the knife that much deeper.

2. David Price falters in the postseason…again

It was about what everybody should have expected, which was what made it all the more maddening. The Red Sox’ $217 million man has still yet to win a playoff game, a matter he kept alive in Cleveland in October with a Game 2 ALDS outing during which he allowed five runs on six hits over only 3 1/3 innings, helping lead the Sox to an 0-2 hole against the eventual American League champs. In nine postseason starts, Price now has a 5.74 ERA. He’s 0-8 in those games, the longest postseason streak in history. His teams (Tigers, Blue Jays, Red Sox) are 0-9. Price jokes upon being introduced in Boston that he was saving all his postseason wins for the Red Sox. Well, not yet. Price has found some levity in his postseason failure, often tweeting this offseason about his troubles. It’s an odd attitude to have, particularly noting the temperature of a fan base ready to pounce after his first season in Boston. Jon Lester, whom the Red Sox didn’t want to sign at the age of 30, winning the World Series, while Price continues to post numbers that the dynamic October Lester can sneer at, didn’t help.

1. Patriots gag away home-field advantage in loss to Miami. 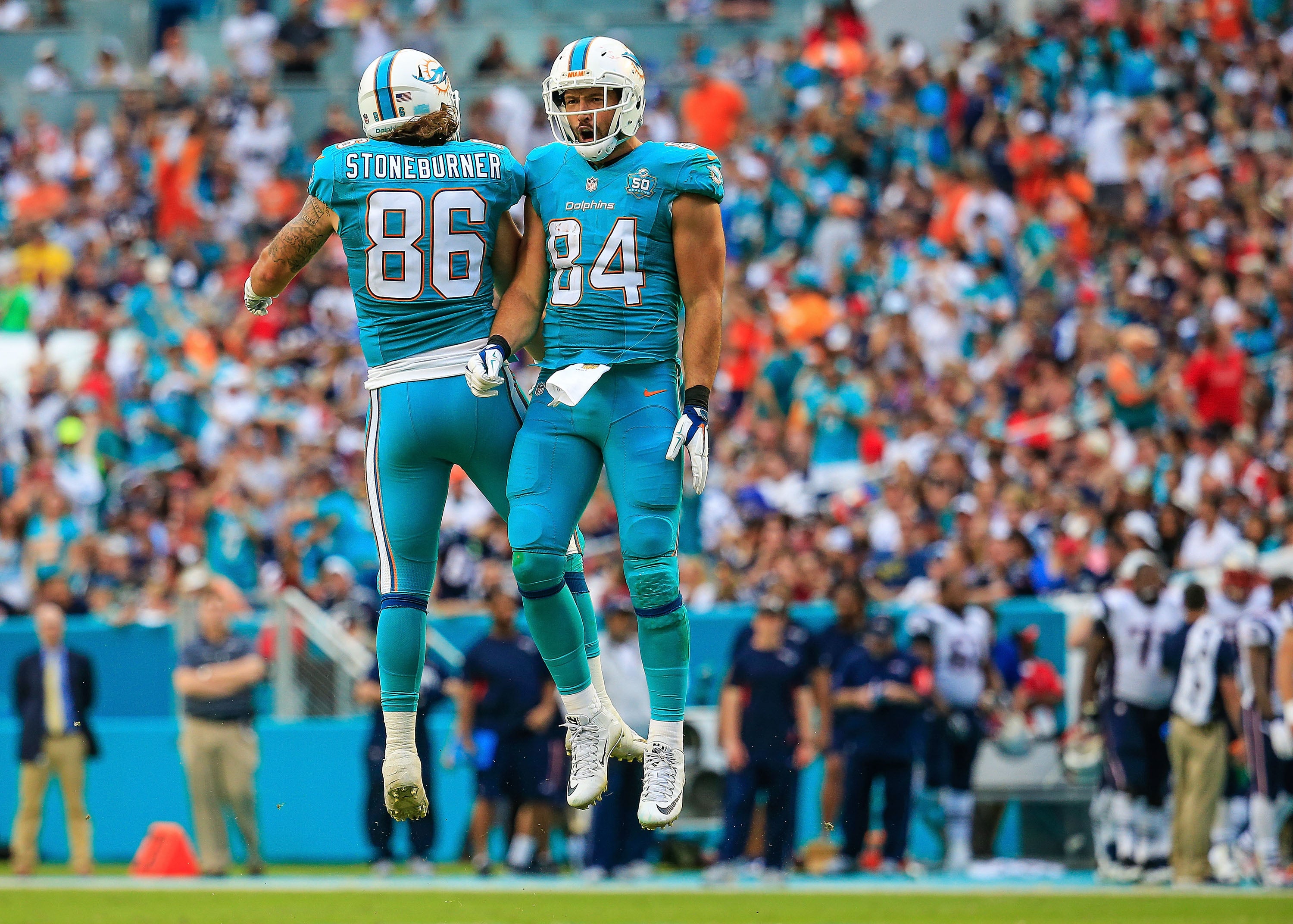 Jordan Cameron celebrates with Jake Stoneburner of the Miami Dolphins after scoring a touchdown during the second half of the game against the New England Patriots at Sun Life Stadium on January 3, 2016.

Sure, perhaps Stephen Gostkowski’s missed extra point kick in the AFC Championship game in Denver remains atop this list, but let’s go back to the reason the Patriots were there in the first place. New England had a pair of opportunities to secure home-field throughout the AFC playoffs, instead throwing away an opportunity to the Jets by kicking off in overtime, then laying a massive 20-10 egg on the field in Miami on Jan. 3. Brady threw a season-low 21 passes during the game, while Steven Jackson, of all people, led the team in rushing with 35 yards. That left the Patriots with the very real possibility of traveling to their problem spot at Mile High, which they would do a few weeks later in another heartbreaker on that Colorado soil. “Wherever we play, we play,” coach Bill Belichick said after the loss in Miami, leaving everyone to wonder how the playoffs might have turned our differently if Peyton Manning had to come to Foxborough. One year later, the Patriots are in the same scenario, albeit at a lesser cost with Denver out of the postseason running.

What NFL experts are saying about Thursday's Patriots-Bills game