On the day of the team’s Super Bowl LI victory parade through the streets of Boston, the local tattoo industry enjoyed a surge in business. At Boston Barber & Tattoo Co., located on Salem Street in the North End, the parade created quite a buzz, as multiple fans came in for Patriots tattoos.

All of them paled in comparison to one Patriots fan, who had a premeditated tattoo plan. He was going to get Tom Brady tattooed on his backside.

“He had decided the night before that he was getting this done,” said Emily Arsenault, who works at the shop. “It wasn’t just spur of the moment. We had quite a few obnoxious people coming in, intoxicated from the parade. But he was actually probably the most calm one out of all of them.”

And the fan, wearing a No. 12 Brady shirt, didn’t dance around what he wanted.

“He just came in and said, ‘I’m seeing if I could get a tattoo. I wanted to get a portrait of Tom Brady on my left butt-cheek,'” Arsenault recalled. “And we were just like, ‘OK, let’s do it.'” 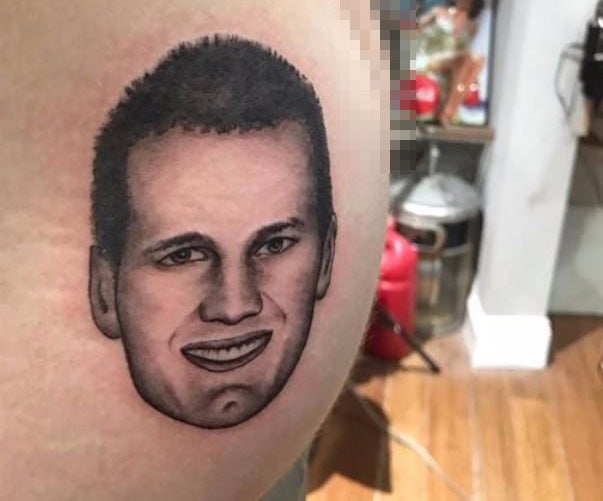 “I think he was up there for two to three hours getting it done,” Arsenault said.

And when it was all over, the newest owner of a Tom Brady butt-cheek tattoo wasn’t afraid to showcase the artwork.

“We got a few pictures,” Arsenault said. “He was proud of it and showed it off. He wasn’t scared. He was like, ‘Oh, you want to take a picture of my butt? Go for it!'”

Despite the increased volume of activity on parade day, the Brady tattoo got the focus it deserved.

“There was a lot going on, people coming in and out trying to get Patriots tattoos,” Arsenault said. “He was kind of more of a priority because he was getting a cool tattoo.”

Boston Barber & Tattoo Co. has been open since 2007, offering its tattoo service since 2014. Arsenault said that this tattoo is the most memorable one she’s seen.

“This one, by far, stands out the most in any category,” she said. “Any butt tattoo is going to stand out, but the fact that he got Tom Brady just makes it awesome.