Bill Belichick walked to the podium on Wednesday morning with a pencil tucked behind his right ear, a navy blue Patriots sweatshirt on, and a slight scruff on his face.

It is eve of the first training camp practice of Belichick’s 18th season as Patriots coach. But there’s a long way to go — as if there is another route to take under Belichick.

“Looking forward to getting going,’’ Belichick said. “But just take it one day at a time. Try to put one foot in front of the other, build good fundamentals, build a good base, and see where it takes us. It’ll be a long haul. I think we’re all excited to get started.’’

Coming off his fifth Super Bowl win, Belichick was true to form entering camp, only vaguely hinting at the Super Bowl LI win — “a relatively short offseason’’ — and emphasizing that nothing any coach or player has done in the past has any effect on the 2017 season.

“This year is this year for all of us,’’ he said. “None of us have done anything. We all have a long way to go. We all have a lot of work to do, so we’re all in the same boat. We’re all pulling the same oar and that’s where it is right now. Doesn’t really matter what happened some other year, some other place, some other time.’’

Belichick did, however, in his own way, announce the club would add joint practices with the Detroit Lions to their training camp scheduling, which will include three sessions leading up to the Aug. 25 preseason game. The Patriots will also practice with the Jacksonville Jaguars and Houston Texans before preseason matchups against them. So, why the third round joint practices?

“We thought it would be beneficial to our team,’’ Belichick said.

Belichick also said there would be a roster update “at some point,’’ as the club has two available spots on its 90-man roster. But asked if he’ll add two players, Belichick said, “I don’t know.’’ 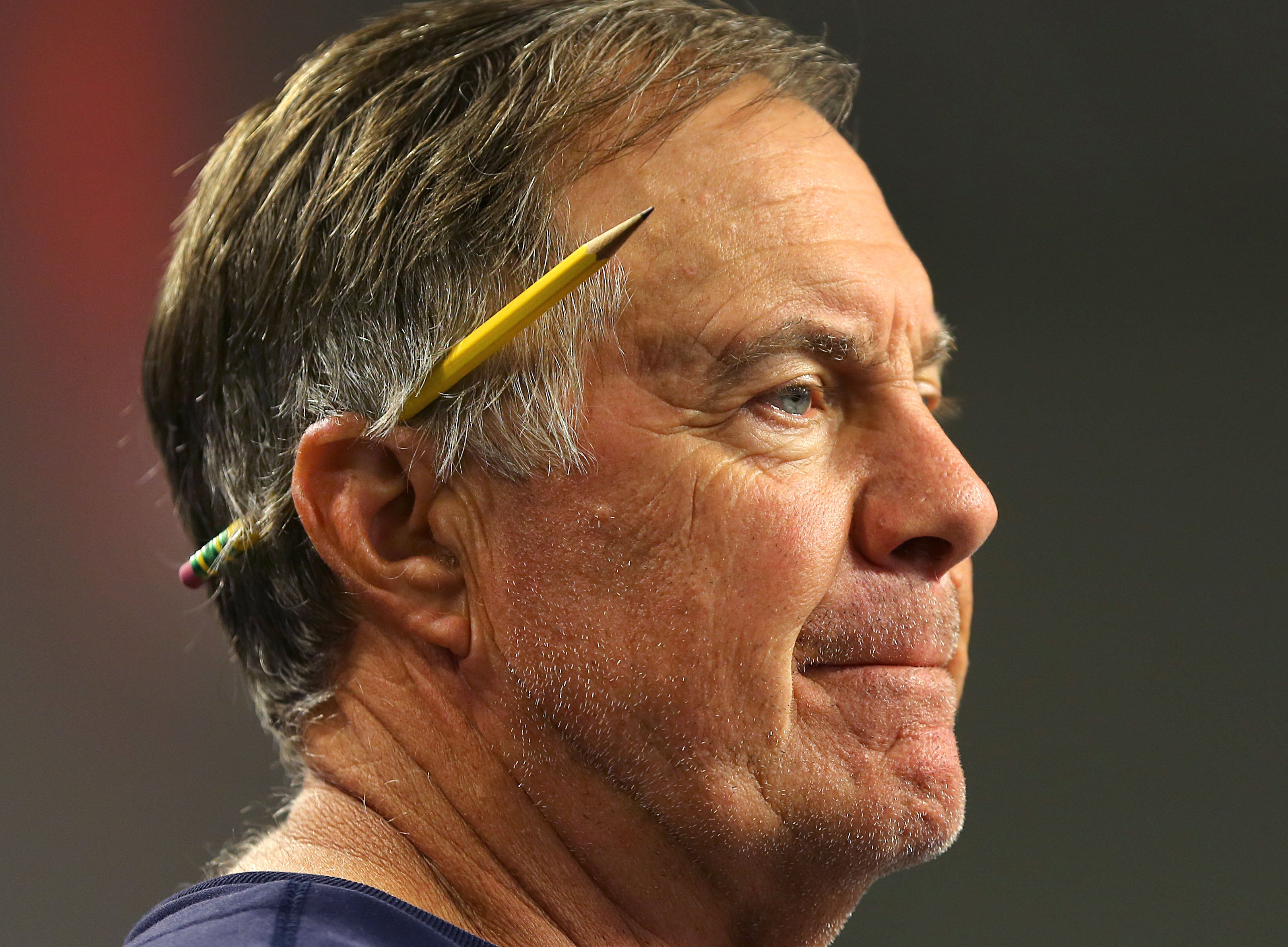 Belichick’s opening statement: “Well, it’s always good to get started. Come back here at the end of July after we’ve been through the spring and gotten to the point we got to at the end of OTAs and get started. New year, starting all over again. Lot of new challenges. Some great competition out there, we’ll see it all through training camp. Our scheduled workouts with Jacksonville, Houston, and Detroit. So, lot of work to do. We’re just going to take it one day at a time. Try to go out there and accomplish things every day. Try to continue to get better and improve on the things we need to work on. There are obviously a lot of things that we did in the spring that we made some progress on and then there were a lot of things that we weren’t able to do because of the restrictions that we have in spring that we’ll deal with here in training camp as it relates to contact and technique and leverage and that kind of thing. There will be a big emphasis for us here in camp. Looking forward to getting going. But just take it one day at a time. Try to put one foot in front of the other, build good fundamentals, build a good base, and see where it takes us. It’ll be a long haul. I think we’re all excited to get started.’’

Q. Did every player show up today?

Q. Is it too early to assess the condition that the players came back in?

A. “Yeah, players reported today. Haven’t done anything. The players that were here Monday are where they are.’’

Q. You mentioned Detroit. Do you have practices planned with them or just the preseason game?

Q. Will you be doing three different joint practices and then the preseason game?

Q. What made you want to do three joint practices?

A. “We thought it would be beneficial to our team.’’

Q. Will that be here, Bill?

Q. What drew you to David Harris?

A. “Thought he’d be competitive to our team. Be able to help our team. We’ll see how it goes.’’

Q. What have been some of your first impressions of him?

Q. Does his durability appeal to you at all?

A. “Well, there’s nothing more important than the health of the players. But those are all other years and another situation and another team, so they are what they are, they’re in the books, I don’t know if they mean anything for this year. This year is this year for all of us. None of us have done anything. We all have a long way to go. We all have a lot of work to do, so we’re all in the same boat. We’re all pulling the same oar and that’s where it is right now. Doesn’t really matter what happened some other year, some other place, some other time.’’

Q. Will his experience help acclimate him to your system?

Q. Will you guys be adding two players to the 90-man roster before practice starts tomorrow?

Q. A national publication predicted you would go 16-0 this season.

A. “Yeah, right now we’re just trying to have a good day here today, get off to a good start in training camp. We’re not really worried about all that’s in the future. That’ll come when it comes.’’

Q. Think we would have been better off reading the July issue of Nantucket Magazine?

Q. For reading instead of talking about you guys going undefeated?

Q. Do you guys miss having Sebastian Vollmer around?

A. “Sebastian was a great player for us. Played a lot of football. Played very well at a young age, his rookie year, against some great players, [Dwight] Freeney, [Robert] Mathis, guys like that. Unfortunately, he didn’t play for us last year. He was here but never actually got to play, so we’ve had kind of life without Sebastian on the field for a year. But yes, we miss him, but we understand that’s the way it is in this game. He’s moved on and we wish him well and we appreciate everything he’s done for us. He was a great teammate, great player for us, and he came a long way in the time that he was in Houston to his rookie year here and played a lot of great football for us on both sides of the line, left tackle and right tackle. Great player to coach, work with, tough, great teammate. Lot of respect for SeaBass.’’

Q. How do you handle or block out the expectations surrounding this team?

A. “Yeah, we’re focused on one day at a time, like I said. I guess I missed some of the great reading that you guys have had. But honestly, I don’t really pay any attention to it. Sorry.’’

Q. How important is the consistency of the coaching staff?

A. “We have a lot of consistency on our entire staff, so thought that was very helpful this year with a relatively short offseason. Those guys, the entire staff, we were able to get into things pretty quickly. There wasn’t really a catching new staff members up or bringing them up to speed or going over things. I mean, pretty much everybody’s been through everything that we’re doing both in the offseason and in the regular season. Our game preparation and so forth. Not that we don’t have a lot of work to do on that, I’m not saying that, but at least we have a level of experience of all doing it together. Yeah, it’s good.’’

Q. How fortunate do you feel to have had Josh McDaniels and Matt Patricia as coordinators for this long?

A. “I feel like we have a good staff. These guys work hard, they all do a good job. Joe [Judge], Matt, and Josh, they do a great job in their respective units, but I think our entire staff does a good job. They work together on their respective sides of the ball. They work together with each other, offense, defense, and special teams, in training camp and during the season and so forth. It’s a good, cohesive staff that works well together. We have a lot of good people. Yeah, very fortunate.’’

Q. How far into training camp do you get of sense of what kind of team you’ll have?

A. “Yeah, I don’t know. Just keep grinding it out day by day and do the best we can every day. That’s really the way I approach it.’’

Q. How important is the consistency on the offensive line?

Q. How do the fans affect training camp?

Q. Would you say the foundation for a well-conditioned team really begins this time of year?

Q. Just how much has Moses Cabrera changed the routine when it comes to conditioning?

Q. In what respects?

A. “Just the program he runs, which encompasses everything: speed, strength, power, explosion, rest, recovery, which, again, there are a lot of people besides him involved in that. But on his end of it, he’s done a great job and given our players the chance to compete at the highest level and perform close to their peak performance. Got a lot of other things that go into that, but that’s a big part of it.’’

Q. What is your reaction to the latest CTE study?

A. “Right. Well, I think the league addressed it. I don’t really have much to add to the statement they released. But obviously it’s an important area that’s being given a lot of attention, as it should.’’

Q. Do you worry about the future of the game when a study like that comes out?

A. “Well, again, there are a lot of studies out there. I’m not a medical expert. That’s not really my field. I think we’ll leave that to the people who are doing it.’’

Q. How much do you enjoy this time of year every year and starting over, building a team from scratch?

A. “I don’t really think we’re going from scratch. I think we’ve put a lot into the offseason program. Put a lot into the spring. Think we’re at a point now where we’re ready to move into the next phase of it and then there’ll be a point in time where we’ll move into another phase of it, and so this is where we are. We’ll hopefully make the most of the opportunities that we have going forward to put our team in the most competitive position. We have a lot of decisions to make and a lot of those will be made for us by the performance of the players and the team and so forth, but we’ll still be involved in that. So, it’s that phase of it. But yeah, it’s part of the team-building phase. It’s good to get going.’’