WHITE SULPHUR SPRINGS, W.Va. — Just up a ridge from the horse stables, down a twisting road from the gun club and across a two-lane highway from a parking lot containing spaces for sporting luminaries like Jerry West and Pete Sampras, the Houston Texans practiced football.

Their 2 1/2-hour session two weeks ago began around 9:45 a.m., which precluded the players from partaking in activities available during that window to the Greenbrier resort’s other guests: an 80-minute Segway tour of the grounds, the Body Sculpt fitness class, a culinary demonstration featuring crab salad, and a Jeep off-road adventure.

“I don’t know what that is,” linebacker Shakeel Rashad said, “but it sounds amazing.”

For roughly 14 hours each day, the Texans resemble every other NFL team preparing for the season. They study film and compete for roster spots, lift weights and meet with coaches. But then their walk-through concludes at 8 p.m., and they are free to unwind not by playing video games on personal consoles but in an arcade — housed in an eight-lane bowling alley.

On his arrival at the Greenbrier, one Texans player thought he was looking at a replica of the White House.

The Texans decamped to this picturesque cranny of southeastern West Virginia, chiseled into the lush Allegheny Mountains, not to lavish players in luxury but to promote productivity. By escaping the energy-sapping heat in Houston, the Texans believe they will train more efficiently, and with less strain on their bodies. The measurements gleaned by the team’s sports science analysts, general manager Rick Smith said, have already justified the move.

“The objectives and goals of training camp don’t change because the environment changes,” said Smith, sitting on a couch on the second-floor veranda of the team’s base of operations here, a 55,000-square-foot sports performance center across Route 60 from the Greenbrier. “We’ve got to figure out the 53 guys who are going to help us win a championship. That is the primary objective and it stays that way, and our guys know that.”

They also know that this camp is unlike any other in the league, in a setting as secluded as it is opulent. When the Texans’ convoy pulled up on July 25 to the Greenbrier, where a room in this peak summer season sets you back $350 a night, defensive end Christian Covington thought he was staring at a replica of the White House.

A few days later, the rookie offensive lineman Julién Davenport got lost returning to his room. He took the wrong elevator and needed a map to reorient himself. For the rookie running back Dare Ogunbowale, a rumor he heard that bears lurked in the trails near the practice fields almost paled next to another discovery he made.

A sitting area inside the resort.

“There’s a bidet in my bathroom,” Ogunbowale said. “I’d never seen one in person.”

The New Orleans Saints pioneered this experience, conducting camp here the past three summers before they, too, conformed to the leaguewide trend of training at home. A decade ago, 16 of the 32 teams adhered to that romanticized notion of camp, leaving family behind to build cohesion in spartan dormitories on leafy campuses. That number has dwindled to 10, with the Texans — call it a hunch — the only ones who have bonded over the décor in their rooms.

“A real big question early was, ‘What’s your wallpaper like?’” Rashad said. “Some people have flowers. Some people have bright colors, like I do. You wake up in the morning and you’re like, ‘Wow.’ You’re immediately excited.”

An outdoor swimming pool overlooking one of the golf courses at the resort.

The Greenbrier, founded in 1778, rambles across 11,000 acres on the western fringe of town, just past the Virginia border, about a mile from an eclectic set of businesses: a confectionery, a Jamaican diner, a pawnshop.

One does not happen upon White Sulphur Springs. Reaching here requires effort, a lovely drive through the mountains, and that relative seclusion both appealed to and confused the Texans, some of whom wondered why they had to go all the way to West Virginia for camp.

With a laugh, Lynn Massie, 46, whose mother, Kathy, has owned the popular Jim’s Drive-In in nearby Lewisburg for the last 17 years, said, “I can imagine people driving through downtown like, ‘What have I done and where am I going and what have I gotten into?’”

The camp’s remoteness has created logistical challenges, demanding of Smith and his staff more forethought when inviting free agents for workouts. With the closest major airports 80 miles (Roanoke, Virginia) and 120 miles (Charleston, West Virginia) away, coordinating travel is essential.

The isolation has also produced meager crowds, a natural consequence of training 1,200 miles from home, in an area not easily accessible by major commercial airlines. Instead of drawing a few thousand fans as they would in Houston, the Texans attracted at most 300 for each of two sessions last week, and the atmosphere lacked because of it.

Among the sparse crowd was Richard Porfirio, 28, of suburban Clear Lake, Texas, who loaded camping equipment into his 2005 Nissan Maxima and set off to watch his favorite football team. “Why not?” he said.

The primary beneficiaries have been displaced Texans fans like Jennifer Brannan, 42, of Frederick, Maryland. She and her husband, Kevin Spurgers, 46, a native Houstonian, booked a vacation here with their children, Finn, 6, and Grace, 4, as soon as the camp dates were announced. Hanish Patel, 28, who is from the Houston area, moved to Roanoke in June to begin a residency in internal medicine and considered the Texans’ arrival mutually beneficial.

“Can you imagine training in July and August in Texas?” Patel said. “It’s brutal by 7 a.m. there.”

The temperature here on Thursday last week topped out at 82 degrees. It was, players said, the hottest day to that point. As a cool breeze wafted through the air, Covington remarked, “If we were in Houston, we’d be melting.”

Fiedorowicz said: “Mentally, by the end of practice, your brain would be fried. You’re just exhausted. I’m coming out here every day and I’ve got energy.”

For years, Smith said, the Texans studied the cumulative effects of training in intense heat. They wondered, for instance, whether warm-weather teams fared better or worse at the beginning and end of the season, but no worthwhile patterns emerged.

Signs in the resort welcoming the Texans.

Last August, though, the Texans practiced with the 49ers in Santa Clara, California, and the team’s tracking data revealed that players were able to endure a greater workload in the cooler weather — and at the fast tempo favored by Chip Kelly, San Francisco’s coach at the time — without their bodies absorbing as much wear and tear.

Smith said he had already scouted alternative training camp sites, at Appalachian State in Boone, North Carolina, and the United States Military Academy at West Point, but the revelation at 49ers camp had further motivated him. He spoke with his New Orleans counterpart, Mickey Loomis, to express interest in shifting to the Greenbrier if the Saints ever decided to leave. Smith said the Texans, who will practice with the New England Patriots here this week before leaving West Virginia on Aug. 17, were committed to spending at least two summers here.

Such continuity would deepen the Texans’ ties to a region about 225 miles from the nearest NFL team, the Carolina Panthers, in Charlotte, North Carolina. Residents’ allegiances tend to tilt even farther afield, toward the Pittsburgh Steelers (260 miles away), the Washington Redskins (270) and, as of 2014, the Saints (880).

“The same people would drive up every year,” said Sherry Rosynek, who works at Cook’s Country Kitchen here, where the staff won over Saints quarterback Drew Brees by accommodating him past closing time with his favorite meal: country fried steak, mashed potatoes and green beans. “It’s almost like they were regulars of mine because I’d look forward to seeing them when the Saints were in town.”

The sports performance center was built for the Saints, and their presence gave a lift to the local economy. The team’s generosity after devastating floods pummeled the area in June 2016 intensified the connection. The Saints rebuilt a community park on the day players reported to camp last July.

But when the Saints acknowledged in February that they were leaving, residents were concerned that the NFL would not return.

“If you’re used to conveniences, to run to Target or Hallmark to buy a card, that just doesn’t happen here,” Massie said. “So to even have a football team, and then to think we might be losing it, everybody panicked.”

Only about a week passed before the Texans announced they were coming, and residents set about learning the names of players not named J.J. Watt. Shop owners soon put their Saints paraphernalia into storage and hoisted banners and welcome signs across the Greenbrier Valley. One, on West Main Street, proclaimed: “Welcome Texans: Wattage is low here Need visit from JJ.”

Through their first week or so in town, players had little time to explore beyond their day off, which many used to relax — running back Lamar Miller recommended the room-service chicken wings. Others roamed the surroundings.

Kicker Nick Novak went fly-fishing with punter Shane Lechler. Fiedorowicz commandeered a golf cart for a tour, while Covington wandered by the underground bunker, completed in 1961 and decommissioned in 1992, constructed to withstand a nuclear attack.

Players said they were not restricted from any activity, but do not expect to see Watt zip-lining anytime soon. There is always the pocket square seminar or, for the less adventurous, the infinity pool overlooking the 18th hole of the Greenbrier course, where last week the Tree Tops Café offered a custom drink special: a Big Texan Margarita. 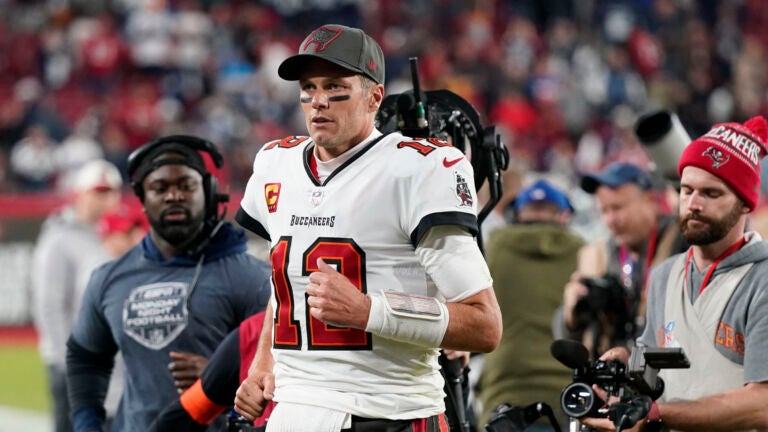 Could Tom Brady return to AFC in free agency? Here’s what the current Vegas odds say.