Five takeaways from a 33-30 loss to the Panthers, as the Patriots fall to 2-2 on a last-second field goal:

The Patriots’ biggest on-field advantage is supposed to be at the quarterback position, at least as long as Tom Brady is behind center. And, to his credit, Brady has played at a level consistent with that assumption, putting together another 300-yard performance Sunday and tossing two more touchdowns that bring his total to 10 on the season. He’s yet to throw an interception, so his passer rating sits at 116.57 through four games.

The passer rating of the Patriots’ opponents, though? That’d be 116.55.

So, then, to this point the Patriots have had virtually no advantage at football’s most critical position – and on Sunday afternoon, in fact, the Panthers’ quarterback was actually better. As good as Brady was in bringing the Pats back from two scores down on Sunday, Cam Newton morphed back into his Superman moniker with the help of a Patriots defense that, at this point, may not be able to cover anybody even inside a phone booth.

What Newton did through the air was one thing (22 of 29, 316 yards, three touchdowns, one pick), but the difference he made with his legs and his decision making was another. He ran eight times for 44 yards and a score, effectively picking his spots with a couple of designed third-down dashes. When he was near the goal line, he reminded the league how tough he is to handle for smaller tacklers.

Newton is no slouch, of course. He’s just a season removed from an MVP campaign and an NFC championship. But entering Sunday he ranked 29th of 32 qualifying quarterbacks in passer rating, averaging just 185 yards per game. He’d thrown just two touchdowns against four interceptions. Running had become a de-emphasized part of his game, and he was limited in practice by the shoulder he had surgically repaired.

Yet, for a third time in three tries, a mobile passer with perceived limits came into Foxborough and thrived. Handling those types of quarterbacks could be considered something of an Achilles’ heel for these Patriots.
But, in reality, the problem appears to pertain to any quarterback at all.

If anyone is looking for the Spark Notes-style explanation of the Patriots’ early defensive struggles, they need only go back and look at Carolina’s final drive of Sunday’s first half – which was full of the indecision, miscommunication, and big plays that have defined the Pats’ failures through the first four games of this season.

The first breakdown came with the Panthers facing third and 8 from their own 18 yard line. Leading 13-10 at the time, by forcing a punt the Patriots could have given their offense excellent field position and about two and a half minutes to push their advantage to double-digits – but, instead, Eric Rowe whiffed on a tackle that would’ve dropped Devin Funchess short of the sticks, and Carolina refreshed its downs.

Four plays later, the Pats had a chance to stunt the Panthers again, putting the visitors in a third-and-9 predicament, though both Rowe and Stephon Gilmore left Kelvin Benjamin alone for a 43-yard pickup (Carolina’s longest of the season). That type of confusion has been all too familiar for New England this year, and, in fact, it reared its head again two plays later. Failing to figure out their read pre-snap, the Pats let Funchess release freely from the line with nobody following, and Cam Newton made the simple pitch and catch to the end zone. It was Newton’s second scoring pass of the first half, neither of which was contested.

After that, only 26 seconds remained on the clock. In recent years there have been a number of occasions, with more time at their disposal, that Bill Belichick has taken a knee and headed for halftime. This time, however, he stayed aggressive and the Pats came out passing in search of points. They got them with Stephen Gostkowski’s 58-yard field goal, but maybe more booming than the boot was the statement that decision made about what Belichick believes about his defense.

Beliefs that continued to be reaffirmed in the second half, as well.

The saving grace for New England’s defense Sunday was its ability to come up with turnovers that tilted momentum, the Patriots generating multiple takeaways for the second consecutive week after stealing just one possession over the first two games combined. Without those, they may not have even been in the game until the final play.

The first turnover was a Malcolm Butler interception that appeared to be the byproduct of superior film study. In press coverage to Newton’s right, the cornerback recognized what was unfolding and completely abandoned his own man as Damiere Byrd started going deep up the sideline. After a full sprint, he beat Byrd to the spot where Newton’s throw came down, and hauled in his first pick of the year.

The second turnover was arguably more important, as the Panthers were moving the ball on the first possession of the second half – until Trey Flowers punched the ball out of Jonathan Stewart’s hands at the 9 yard line. Elandon Roberts covered it, and the Pats had successfully dodged a bullet after letting Carolina get into the red zone in just five plays.

Through the first 44 minutes, the Patriots had committed just three penalties that had officially cost them a total of 25 yards. For the game, they had seven flags thrown on them for 55 yards. But quantity alone doesn’t indicate how much of a killer those infractions were for the Patriots.

There was a pass interference call on Danny Amendola that canceled a 14-yard, third-down completion to Rob Gronkowski and killed a promising drive early. There was a third-quarter call that only cost them five yards, but a Panthers drive that would’ve otherwise ended with an incompletion was extended by an illegal hands to the face penalty on Stephon Gilmore, and eventually Carolina turned that opportunity into a Funchess touchdown.

Then, after the Pats had rallied to tie it, Gilmore was called for the same thing on the game’s final series. This time it negated a third-down Deatrich Wise sack that would’ve given the Patriots the ball with a great chance to go and win it. Later on that drive, a defensive holding call on Pat Chung gave Carolina the fresh set of downs it needed in order to control the clock and dictate the final minute leading up to its game-winning field goal try.

All of those calls were borderline. (Just ask Troy Aikman.) A different officiating crew might well have whistled another way, but the Patriots overall performance left them in a position where they were prone to a call or two going against them. After all, it wasn’t the referees’ fault that the offensive line struggled to protect Brady, the quarterback missed Dwayne Allen on a would-be big-gainer and Brandin Cooks with space on a throw up the seem, or that the Panthers picked up five of their first seven third-down conversion attempts. 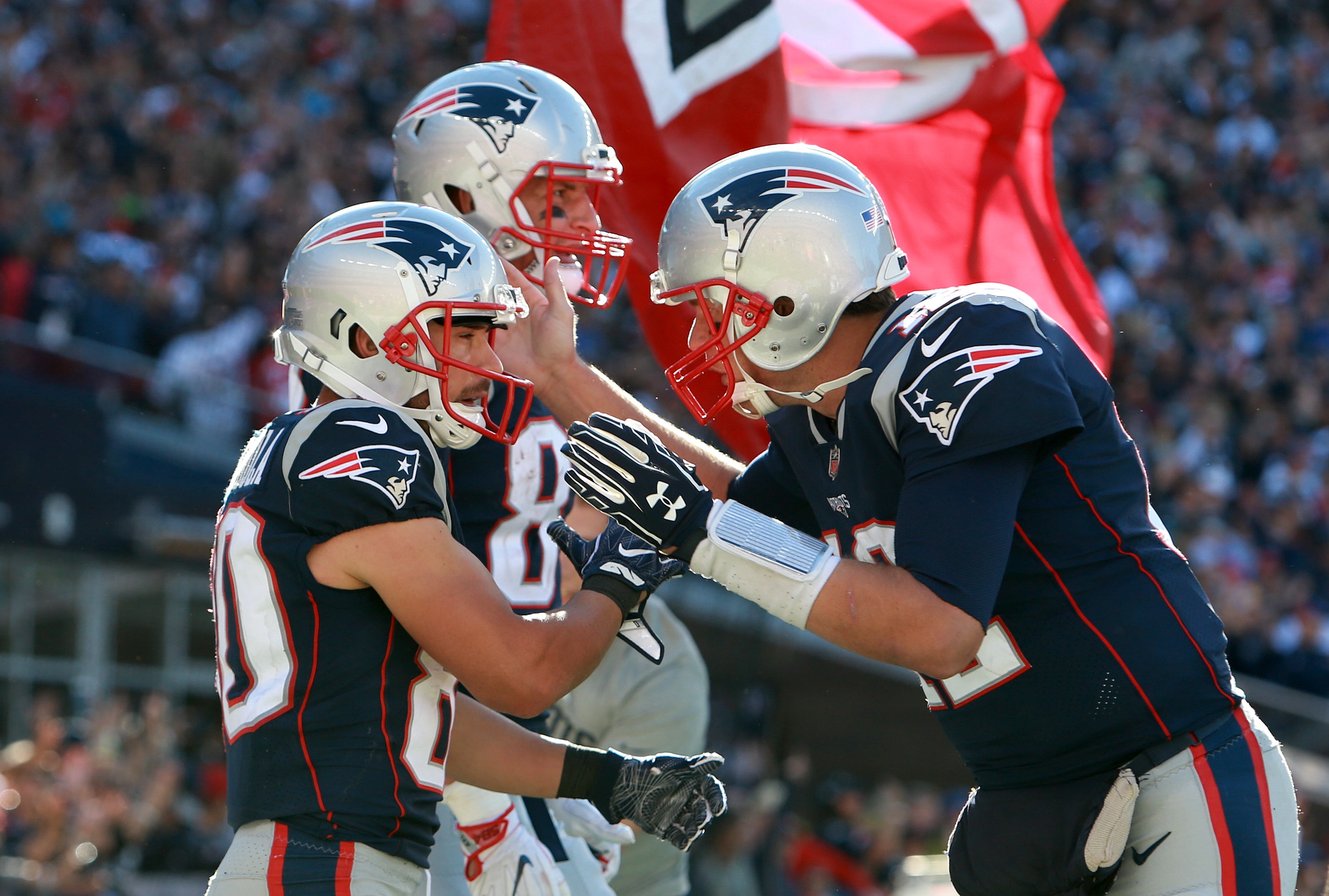 Tom Brady connected with Danny Amendola for a game-tying touchdown in the fourth quarter.

It’s uncharacteristic to see the Patriots with a 1-2 record at home, particularly with the acknowledgement that they could easily be 0-3 at Gillette Stadium. But if one thing went as expected on Sunday, it was that when New England needed plays in big spots during the fourth quarter, Danny Amendola showed up.

With three catches on the Pats’ final possession, including the game-tying touchdown, and one on which he absorbed a crash-test-dummies-like whiplash, Amendola now has 45 catches on 59 targets (76.3 percent) in the fourth quarter of games since the start of 2014. Those catches add up to 393 yards, with Sunday becoming his sixth touchdown at that stage of the game, and 25 of those grabs have been good for first downs. On a day where the Patriots’ other active receivers combined to catch only nine of 16 balls for 115 yards, and the running game was not prioritized in terms of balance, Amendola’s reliability and contributions shone through. As usual. 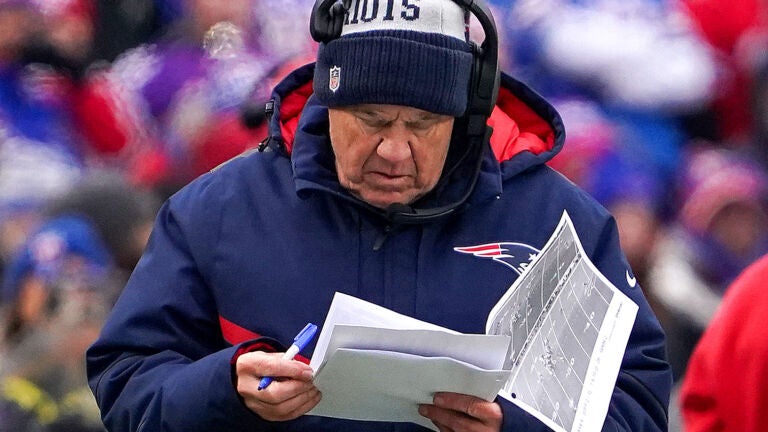