30 thoughts on the Patriots’ loss to the Panthers:

1. The Patriots are 2-2 after the Panthers’ 33-30 walkoff win at Gillette, and you know the truth. The Patriots are fortunate to be 2-2. They could easily be 1-3 – and 0-3 at home – and perhaps even should be. It’s not getting easier, either, with the quick turnaround for the Thursday game at Tampa Bay.

Do Your Job feels less like the title of a how-we-did-it documentary and more like a desperate plea. What is going on here?

2. Well, there are two fundamental problems. The defensive backfield is playing with no cohesion, communication, or coverage plan. The offensive line, especially tackles Nate Solder and Marcus Cannon, have been such sieves that if they do not get their act together, they are going to get Brady hurt.

3. This is salvageable … probably. This isn’t 2009, or any of the other sporadic seasons when something goes haywire with the defense. Bill Belichick and Matt Patricia can repair the defensive issues, and they’re not even that urgent given the mediocrity of the AFC East. (Though the shot at a top-two seed looks tenuous at the moment).

But man, is it frustrating to watch in real time, especially against an inefficient Panthers offense that was missing star tight end Greg Olsen, center Ryan Kalil, and lost standout guard Trai Turner during the game.

4. If not for Tom Brady’s well-honed talent for turning the improbable into the fulfilled, Patriots fans would be right to be in panic mode right now. But Brady rallied the Patriots to victory last week against the Texans, and he nearly did it again Sunday.

5. The Patriots rallied in the last nine minutes from a 30-16 deficit to tie the game at 30-30, with Danny Amendola, Rob Gronkowski, and Dion Lewis all contributing big plays. (Please use Lewis more.) They looked like they were going to snatch a victory in spite of themselves. In general, though, the offense is not the problem, other than the line’s knack for adding bruises to Brady’s growing collection. 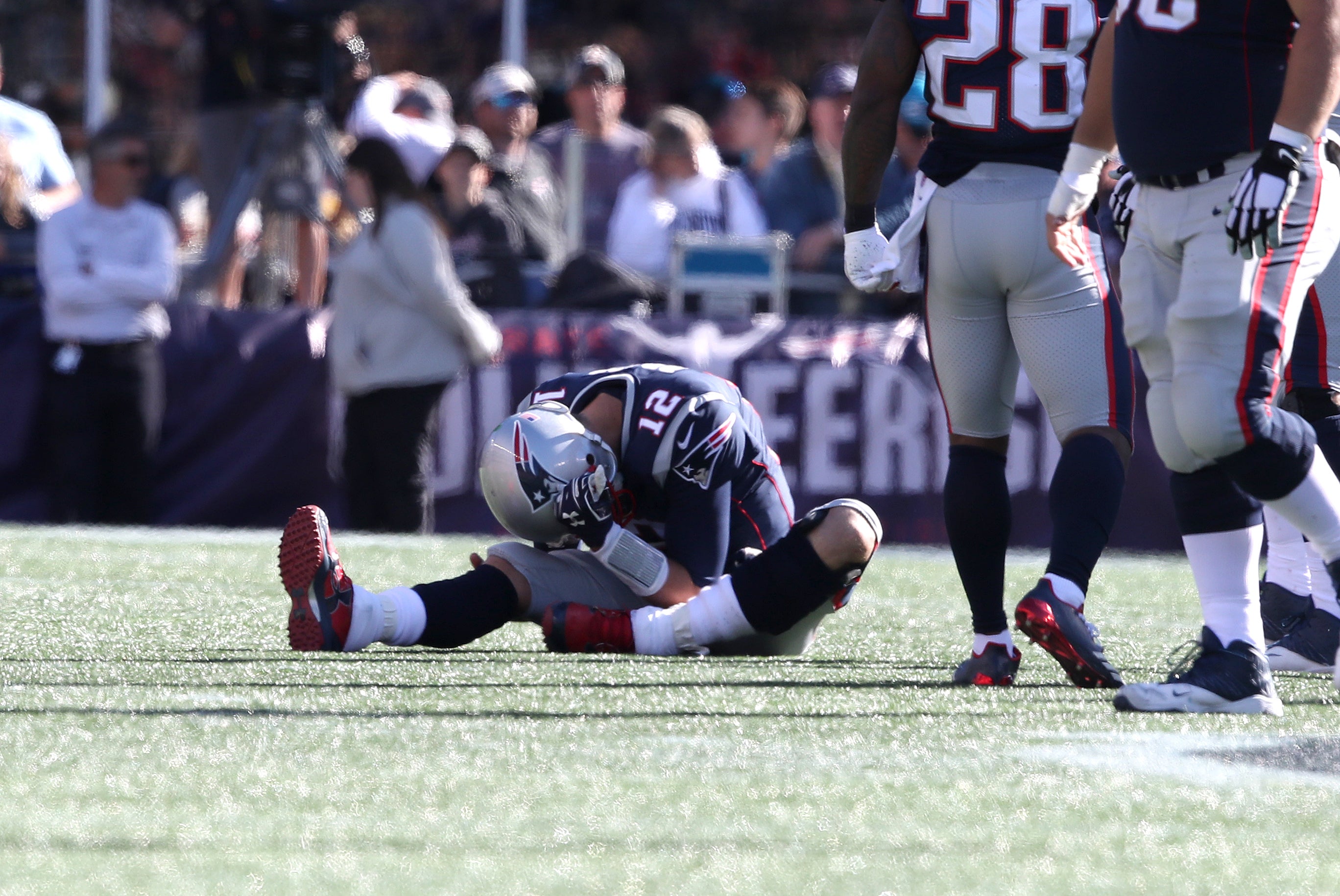 Tom Brady was on the turf after being hit hard in the third quarter.

6. The defense? Now that’s a mess. Patriots had at least three botched coverages in the first half: Fozzy Whittaker’s 28-yard catch-and-run down the sideline for a touchdown, a 43-yard catch by Kelvin Benjamin on the Panthers’ final possession of the first half, and Devin Funchess’s 10-yard touchdown reception that put them up 17-13.

7. Then there was the 39-yarder to Benjamin on third-and-4 to start the fourth quarter, with the Patriots down a touchdown. The coverage was blown so badly that it was tough to tell who was at fault, though Butler, who had trouble with taller receivers all day, eventually made the tackle.

8. The most damaging play? I’m not sure it was one of the touchdowns. Gilmore got nailed for a hands-to-the face penalty with 2 minutes, 13 seconds left and the score tied at 30-30. It negated a hellacious Deatrich Wise sack of Cam Newton on third down and gave the Panthers a new set of downs.

It was a curious call, but there’s no denying Gilmore has been a bust a quarter of the way through this season – even without considering that he has a $65 million deal.

9. I’m half-expecting a Duane Starks sighting at this point. The pass defense has been so abysmal that it looks like an amalgam of two of the most frustrating defenses in the Belichick era – the sluggish 2002 group with Lawyer Milloy, Tebucky Jones, and Victor Green at safety, and the ’05 mess that included Monty Beisel at linebacker and Starks at cornerback.

10. I’m starting to think, only semi-facetiously, that Logan Ryan was the glue to everything back there.

11. The Panthers’ misdirection play on Whittaker’s touchdown to tie the score at 10 looked like something straight out of the Kevin Faulk-era Patriots’ playbook. Newton looked right, in the direction of Christian McCaffrey, before wheeling around and sending Whitaker on his way.

12. Fox’s replay showed that Stephon Gilmore and Devin McCourty both followed McCaffrey on the play, leaving both Whittaker and tight end Ed Dickson wide open. Gilmore and McCourty had costly communication issues in the opener against the Chiefs.

13. Given McCourty’s history of reliability, especially since he moved to safety, it’s fair to assume Gilmore isn’t quite where he needs to be, literally and figuratively. He shouldn’t be allowed to wear Ty Law’s number until he can do it justice.

14. I mean, when a play goes wrong and the blame either falls on a long-established and accomplished veteran or a new guy in town, you have to assume the player with seniority is the one who knew what was up.

15. Same thing happened on offense on the Patriots’ first possession. Brady fired a pass in the direction of Brandin Cooks. Incomplete. Brady flashes that Dan Marino-style, presumably expletive-laden frustration. Scott Zolak said on the radio that it was either Brady or Cooks at fault. Given that they’ve had a few obvious misconnections already this season – most of which have left Brady gesticulating angrily at something – it’s fair to be this one is on the newbie to the playbook as well.

16. It would be nice to see something out of Dwayne Allen one of these weeks. He couldn’t hold on to a 40-plus yard Brady throw down the sideline in the third quarter. The pass was underthrown a bit, but it hit his hands, and that means it should have been caught. It essentially killed a potential drive after Trey Flowers forced a fumble.

17. Julius Peppers looked like he’d suffered a serious injury on the Patriots’ first possession. As it turned out, he was fine, and spent the rest of the game putting Tom Brady in danger of injury. Brady must miss last year’s version of Marcus Cannon.

18. If there’s one matchup in the league in which the two combatants should be allowed to play without fear of ticky-tack penalties, it’s Luke Kuechly vs. Rob Gronkowski. Yet Gronk got whacked with a pass interference penalty after initiating contact while beginning his route. That wouldn’t have been called in Pop Warner.

19. I don’t think it was a makeup call since it was a legitimate penalty (albeit one accompanied by some amusing soap-opera level acting by Gronk), but Panthers safety Mike Adams’s 33-yard pass interference penalty was at least a well-timed dose of karma.

20. Kuechly is obviously a fantastic tackler, the player Brian Urlacher was always purported to be. But it’s crazy how good he is in coverage, too. He’s 6-foot-3, 235 pounds, and runs like an angry safety. What a player. Must have been something in college. Anyone know where he went?

21. File this one under Dumb Things You’ve Probably Noticed Before But I Hadn’t: Chris Hogan, as evidenced by his Junior Gronk spike on his touchdown that put the Patriots up 10-3, is a lefty. I told it you it was dumb. What, you’d prefer I mention he played lacrosse again?

22. Hogan’s touchdown was his fourth of the season – tying a career-high set last year and in 2014 with the Bills. That’s surprising since he averaged 17.9 yards per catch last year – it seemed like he scored a long touchdown every two or three weeks. He did add two more in the postseason last year.

23. The Panthers signed Peppers after trading Kony Ealy to the Patriots. That worked out well for the Panthers, and possibly the Jets, with whom Ealy ended up after flopping in training camp.

24. If I recall correctly, the Patriots flirted with signing Peppers a couple of years ago. Too bad it never worked out. Then again, maybe it will down the road. He’s playing like he has five years left in his career.

25. Cam Newton is such an enigmatic player. He’s great, yet oddly inconsistent. One minute he’s throwing a dart to Devin Funchess to put the Panthers up 23-16. The next minute he’s bouncing a screen pass like Drew Bledsoe used to do in those regressive Pete Carroll years. 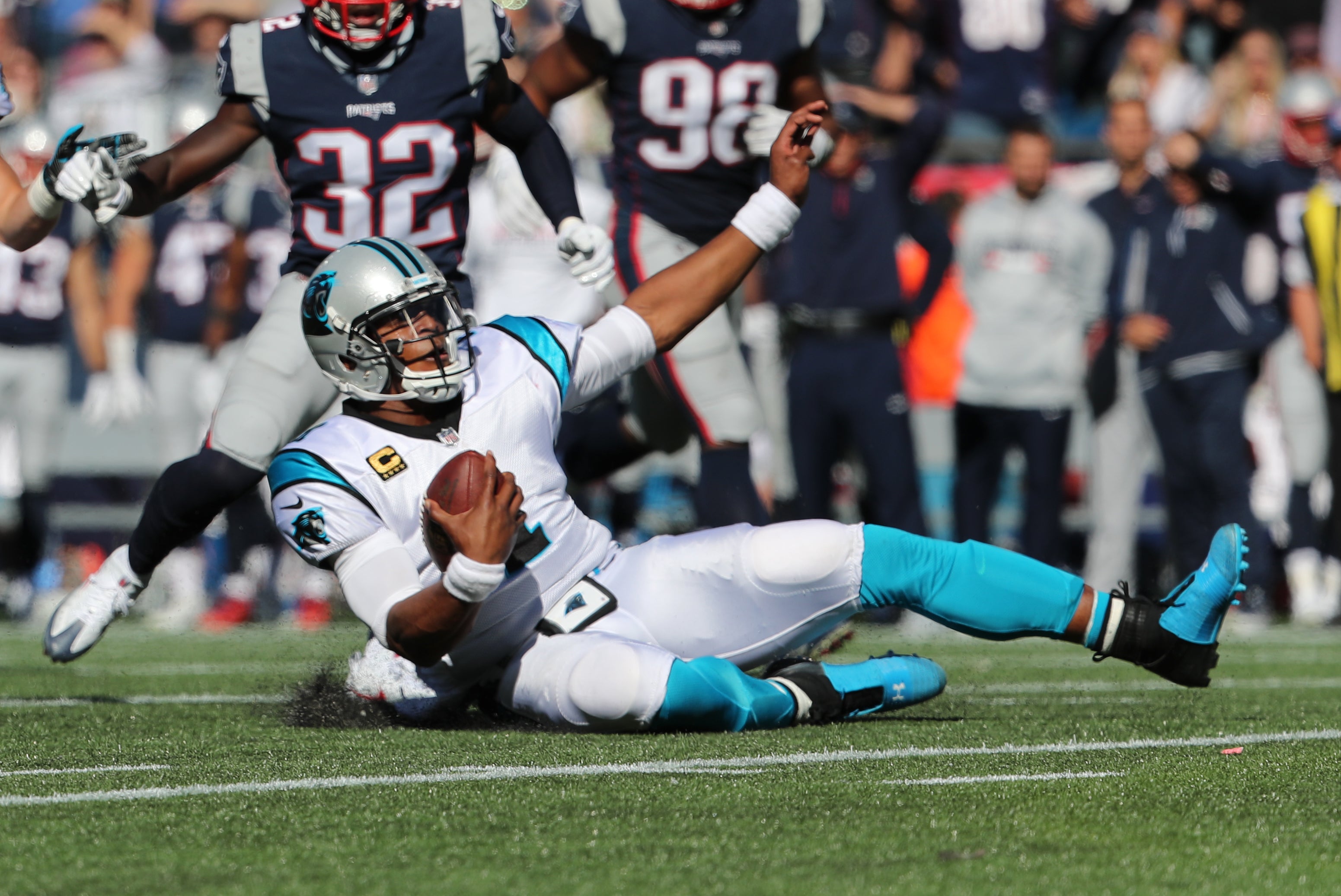 Cam Newton slides after making a first down in the third quarter.

26. Mildly surprised that Stephen Gostkowski’s 58-yard field goal was a career-best. He’s always had the leg for it.

27. Your necessary reminder that Panthers linebacker Shaq Thompson went 0 for 39 with 37 strikeouts for the Red Sox’ rookie league team in 2012. He did manage to work eight walks, however.

28. Eric Rowe left in the first half with an injury. If he’s out next week, that might be the only thing keeping Gilmore from a benching.

29. I have no idea why CSN hired Charlie Weis.

30. So everything that has happened these last four weeks will keep all of us from predicting an unbeaten season before it even begins ever again, yes?