24 thoughts on the Dolphins’ win over the Patriots:

1. No hats and T-shirts for the Patriots. Just a kick in the pants. A night that could have ended with the clinching of their ninth AFC East title in a row instead did not feel right from the beginning. The Dolphins beat the Patriots, 27-20, it was not nearly as close as the score suggests, and on future occasions please use the footage from this ugly game if you must to remind me that a Patriots victory in Miami is never a certainty, no matter the state of the particular teams.

2. It is a tough place to play, even if Tom Brady is at the helm of the Patriots while it’s 2017 Jay Cutler, 2009 Chad Henne, 2006 Gus Frerotte, or 2004 A.J. Feeley quarterbacking the Dolphins. The Patriots have lost to all of those guys during their dynasty. It happens.

3. And I hope the ugliness of this game doesn’t cause panic in the streets — they’re still 10-3, and they’re still a Super Bowl contender. But the Patriots’ eight-game winning streak and 14-game road winning streak ended, and they should have. Miami, on this weird night, was better. Every game is a trap game on their turf.

4. The Patriots did attempt to make it interesting in the fourth quarter, pulling to within 27-17 on James White’s three-yard touchdown catch, then holding the Dolphins to a three-and-out. But a punt return by Bernard Reedy (a real Patriots player) to midfield was negated by a Patrick Chung holding penalty, and the Patriots went three-and-out too, culminating with Brady getting creamed on third down by Ndamukong Suh. They couldn’t get momentum. They couldn’t get much of anything.

5. On the Patriots’ last possession, they advanced to the one-foot line with a chance to cut the score to 27-24. They promptly went backwards, had to settle for a field goal, then gave themselves no chance on the onsides kick. Synopsis of the night, really.

6. In the 13th game of the season, the Patriots starting defense included Marquis Flowers, Jonathan Jones, and Eric Lee. You know, just as we figured when training camp began in August. That’s no excuse for making Jay Cutler look like a decent Dan Marino impersonator for much of the game. 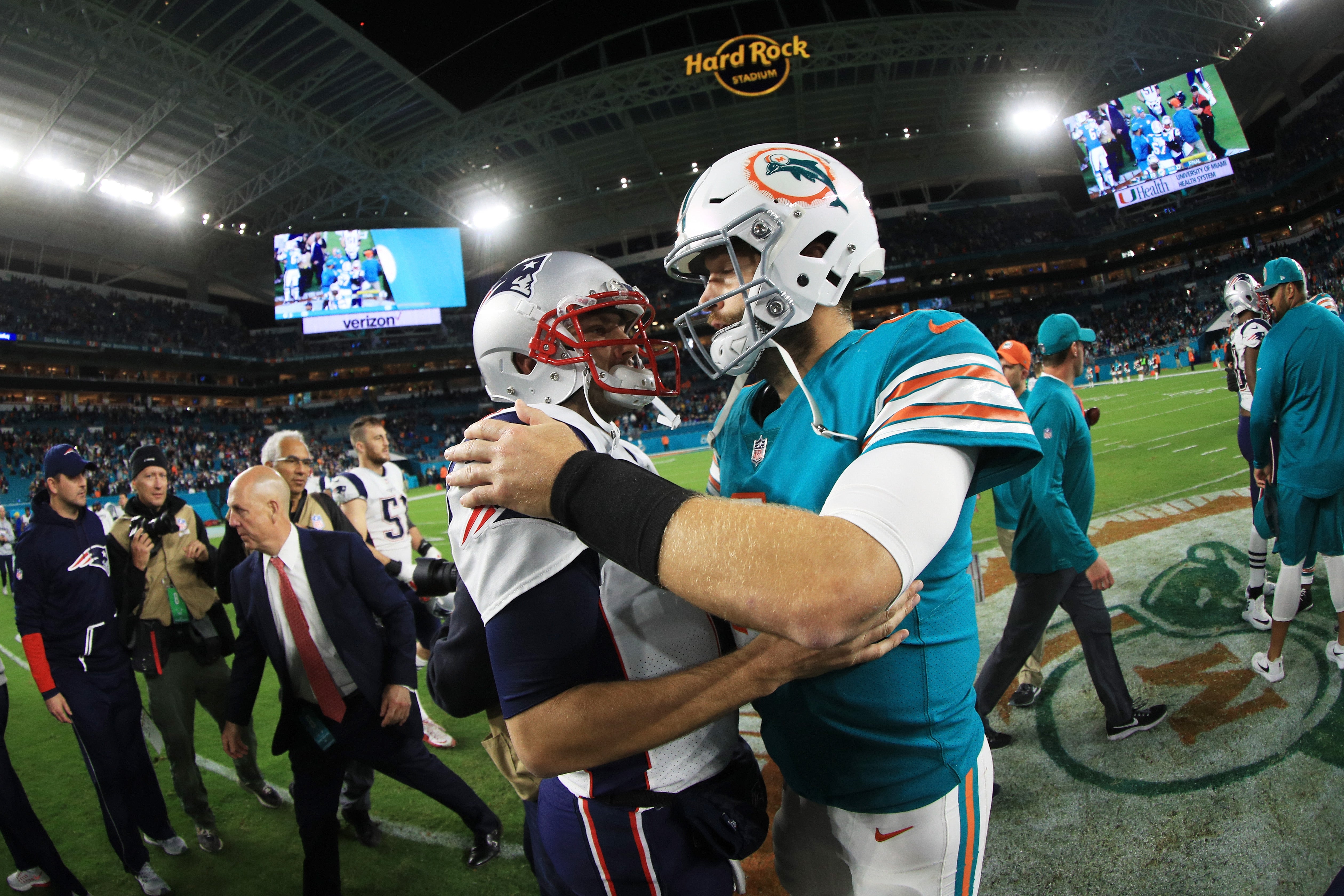 Jay Cutler finished with a 112.1 rating, his third-highest of the season.

7. Cutler finished 25 of 38 for 263 yards and three touchdowns, and the victory might have been by an even greater margin had the Dolphins not been limited to field goals on their first two drives.

8. The communication issues that plagued the Patriots early in the season occasionally recurred, too. The Patriots’ defense is a good one — you don’t hold eight straight opponents to 17 points or fewer when you’re a mirage — but they were not anything resembling good on Monday.

9. Kenyan Drake looked like the real deal at running back for the Dolphins, racking up 114 yards on the ground and another 79 in the passing game on 30 total touches. He dropped a spin move on Chung in the backfield that Barry Sanders would have been proud to call his own. Maybe they knew what they were doing when they sent Jay Ajayi packing for Philadelphia.

11. He was certainly at his best in the first half, completing 15 of 20 passes for 181 yards and a touchdown. Pretty much the first half you’d expect Brady to have.

12. The Patriots’ first possession ended abruptly when Brady underthrew Brandin Cooks and Xavien Howard stepped in front of the receiver to collect Brady’s fifth interception of the season. Howard had two picks last week against the Broncos.

13. Turned out Howard would have two picks this week against the Patriots as well. His second was even more impressive. On the Patriots’ first possession of the second half, Brady unleashed a deep ball in Cooks’s direction. Cooks appeared to have a step-and-a-half on Howard, but the second-year defensive back closed the gap on one of the fastest receivers in the league and plucked the ball away. Tom Brady completed 55.8 percent of his passes against the Dolphins.

14. He sure did start slow. Brady’s first quarter looked like an audition for the Bills starting job — he was 0 for 4 with an interception in the first 15 minutes. His first completion was a 7-yarder to Dion Lewis 40 seconds into the second quarter. And it never really got better.

15. Brady didn’t complete a pass to a wide receiver until the 10:11 mark of the third quarter, when he found Danny Amendola for four yards. That’s excluding his strike to old buddy Randy Moss, who was standing on the sideline repping ESPN during pregame warmups.

16. Brady might have wished Moss would give a few pointers or even run a few routes on behalf of Cooks, who could not get open on the midrange routes against Howard. He’s had an excellent season for the most part, but I’m still not convinced he’s up for being the No. 1 option when they need him to be.

17. I suspect Brady isn’t convinced, either. He had smoke coming out of his earholes after a couple of ill-fated throws in Cooks’s direction.

18. In his return from a shoulder injury, Chris Hogan had one catch for one yard.

19. The best defensive play for the Patriots in the first quarter might have been Stephon Gilmore’s pass interference penalty on a DeVante Parker slant pattern. Gilmore broke up the pass with a little help from a tug on Parker’s jersey. Had Parker caught the pass, he appeared to have a clear path for 60-yard jaunt to the end zone.

20. On the final play of the first quarter, the Patriots caught a break when Julius Thomas inexplicably power-dribbled the football before he could reach the first-down marker on third and 12. Thomas recovered the fumble but gained just five yards and the Dolphins had to punt. Has that guy done anything right since leaving Denver?

21. I generally like Jon Gruden as an analyst, and I know this is a silly semantics thing, but I got tired of him saying the Patriots “lost’’ LeGarrette Blount. It implies the decision was out of their hands. You can’t lose something you didn’t have interest in keeping. They let him get lost.

22. Devin McCourty hit Cutler so hard on a second quarter blitz that the quarterback got up thinking he was married to Lauren Conrad. Topical, right? 23. Brady’s best throw of the first half was a 20-yard alley-oop to Dion Lewis in the second quarter while blitzing, habitually dirty Dolphins linebacker Kiko Alonso was making a beeline for his midsection. That put the ball on the Miami 28. Four plays later, Rex Burkhart ran it in from three yards out and the Patriots had a temporary 7-6 lead. Very temporary.

24. I don’t think the Patriots were looking ahead to the matchup Sunday with Pittsburgh. I think they got beat thoroughly by a team that was ready for them and looking for payback from a loss in Foxborough two weeks ago. The Patriots can still lead the race for the top seed in the AFC with a win at Pittsburgh. I’ve thought all year the Patriots would win that matchup. I still do. But it’s going to take a few days to get this mess out of mind.